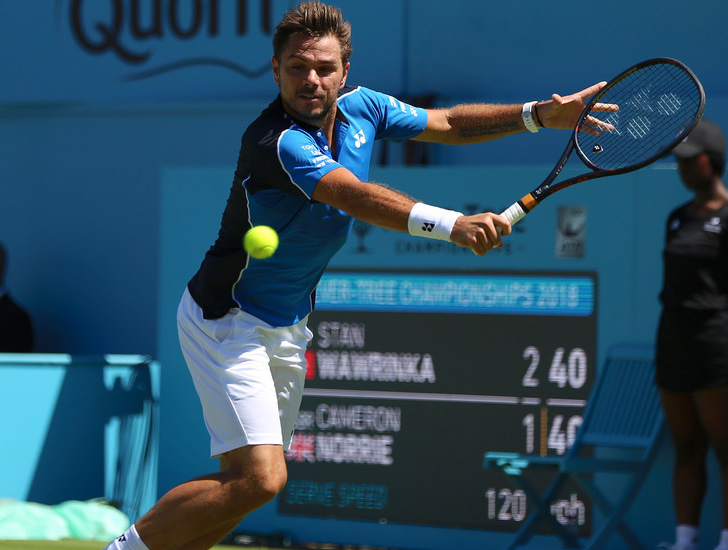 Stan Wawrinka, so long absent from the top league in the last year after double knee surgery following Wimbledon, is certainly a sight for sore eyes at The Queen’s Club this week.

Ranked unseasonably low at 261, the popular Swiss was ranked No3 in the world after he reached the final of the French Open last summer, but first-round losses at Queen’s and then Wimbledon spelled trouble that would endure for the rest of the year and on into 2018.

He has made tentative returns during this year, but arrived at Queen’s with just one match-win through the entire clay season, and a 4-7 win-loss run. And his record at the tournament was not exactly encouraging either. Since reaching the semis in 2014, he had won just one match in three visits.

What is more, Wimbledon remains the only Major at which Wawrinka has yet to win the title, though he has made two quarter-finals, but he has always been up-beat about his chances on grass. And he was in London practising a week before he played his first match against the fast-improving Briton Cam Norrie.

It proved to be just the confidence booster that Wawrinka needed, albeit a blow to home supporters. The 22-year-old Norrie has risen to No80 in the world this season, and reached his first tour semi-final in Lyon, but the left-hander, who is currently the second-ranked British male, was no match for the Swiss. In under an hour, it was done and dusted, 6-2, 6-3, and Wawrinka had dropped only four points on his first serve, and fired down 13 aces.

But yesterday, Novak Djokovic, with whom Wawrinka will play doubles this week, was eloquent about the impact of long-term injury on the confidence of a player, and the doubts that dog the mind once back into the heat of competition.

Wawrinka has had plenty of reason for self-doubt to rear its head after making four first-round exits in the five events he has played since February. And he, too, spoke at length about making the enforced adjustment from world-beater to onlooker.

“I knew when I got the surgery [last August] that it would be really long and really tough, not only physically but especially mentally.

“For me it was tough because I had to start form zero physically. But it’s not only about the physical aspect because we are used to practice, we are used to the hard work. But mentally, it’s tough when you see how far you are and how long it will take.

“Still now, it’s not easy mentally. I need to be really patient with myself, to accept less, in a way, because when you have won a Grand Slam, I always expect so much from myself and always push myself to the maximum.”

The Swiss man, a quietly spoken individual who is not often given to loquacious press conferences, warmed to his subject: This clearly struck a deep chord.

“When you are out of the tour for so long, you need to put your expectation a little bit lower—and accept that, because it takes time. It takes time not because you’re doing the wrong thing but just because it is how it is when you have big surgery.

“So I think I’m getting better now. I improved a lot physically and I am getting closer at least on the practice court. But I know that the next few months will not be that easy.

“So I need to take every match, every win, as something really positive and keep doing the right job every day.”

And what about the specifics of winning this first match, and of the condition of that knee?

The next match will be a tougher test still, against former champion and the No5 seed Sam Querrey, who beat another young Briton, Jay Clarke, 6-3, 6-3, in just over an hour.

But this one win has already boosted Wawrinka 40 places in the ranks, and should he go on and win the title, it would catapult him back inside the top 100. A couple of match-wins at Wimbledon would then lift him further still.

But of course, such talk means little alongside the boost to both his physical and mental wellbeing that each and every win will give this Swiss man.