Photo: Mesut Ozil all smiles after linking up with Arsenal stars 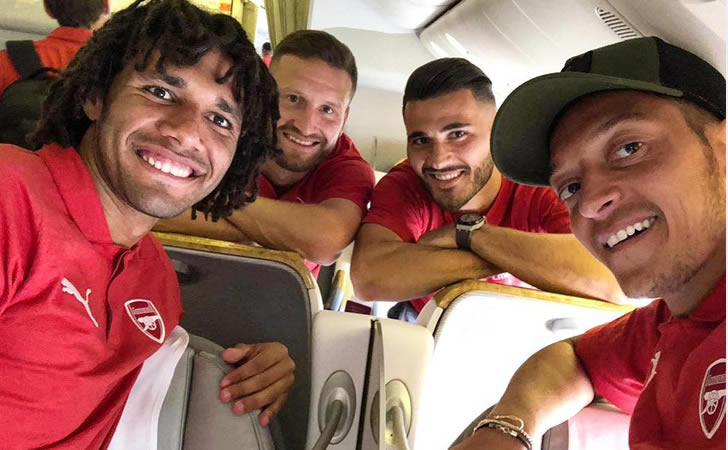 Mesut Ozil seemed to be in good spirits as he posed for a selfie with some of his Arsenal team-mates as the playmaker linked up with the Gunners for their pre-season tour of Singapore.

Ozil had been granted an extended summer holiday after having featured for Germany at this summer’s World Cup in Russia.

The 29-year-old announced his retirement from international football over the weekend after Germany’s disappointing World Cup campaign resulted in them being knocked out in the group stage.

The playmaker will now be focusing on club affairs as he looks to try and rekindle his best form for Arsenal in Unai Emery’s first campaign in charge of the north London side.

And the former Real Madrid star looked to be in a good mood as he posed for snap with Mohamed Elneny, Sead Kolasinac and Shkodran Mustafi on board the Arsenal flight to Singapore.

Mustafi shared the picture above on his personal Instagram account and wrote the caption: “Singapore here we come… pre-season continues with a big smile 😃 @arsenal @emirates #AFCTour2018 #SM20.”

Arsenal will be looking to at least break back into the top four next season after the Gunners missed out on Champions League qualification last term.

The north London side finished in sixth place and without a trophy in Arsene Wenger’s final season in charge last term.