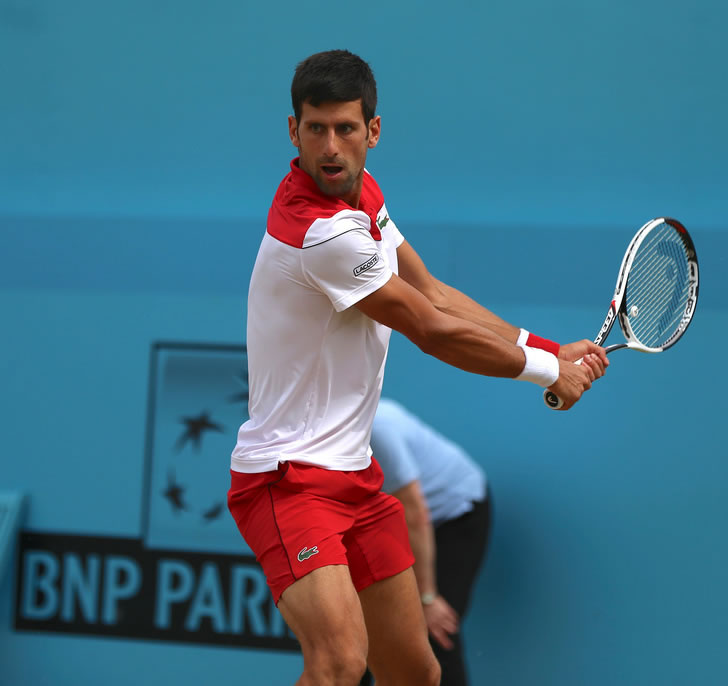 It was proving to be a week of firsts in a year of firsts for the No21 seed Kyle Edmund.

He arrived at his home Major this week at a career-high No17 ranking, was seeded for the first time at Wimbledon, and was the top-ranked Briton, man or woman.

He arrived, too, as a Major semi-finalist, having reached the last four at the Australian Open, and made his first tour final in Marrakech. He went on to make his first quarter-final at a Masters in Madrid.

Last year here, Edmund finally won his first main-draw match after four first-round exits as he evolved from teenager, through #NextGen, and on to his current age of 23.

And his development and maturity were showing. This year, he was serving bigger, was fitter and stronger man, a man with growing confidence and, just as important, with the growing respect of his fellow players. After all, he could count victories over Grigor Dimitrov, David Goffin, Kevin Anderson, Lucas Pouille, and Novak Djokovic this season—all of them seeded higher at this Wimbledon than he.

On Wednesday, Edmund ticked off another ambition: to play on one of Wimbledon’s big show courts. He took on his first opponent on Court 1, and beat qualifier Alex Bolt in straight sets. And come Thursday, he experienced Centre Court for the first time, beating another qualifier, Bradley Klahn, also in straight sets.

It was fair to say that his third match would take things to an altogether higher level. He faced 12-time Major champion, three-time Wimbledon champion, and former No1 Djokovic. And while Edmund had got the better of the No12 seed on Madrid’s clay, a lot of water had gone under the Serb’s bridge both before that match and since.

Before, Djokovic had not made a final since he won the Eastbourne title a year ago. He then struggled with persistent elbow problems, did not play until the start of this year, and then aborted his return to have minor surgery after the Australian Open.

He went on to lose in the first rounds of the Indian Wells and Miami Masters, but began to pick up his form and confidence—along with his old coaching team—on Rome’s clay. He was desperately disappointed to lose in the quarters of the French Open, but that seemed only to sharpen his resolve ahead of the grass season.

Eager to build his momentum, he took a wild card into Queen’s, and was soon impressing. He came within a hair’s breadth of beating Cilic in the final.

The quick footwork, precision baseline striking, clear tactics, and that happy mix of outrageous defensive skill and quick transition into attack, have always paid dividends on the grass. So while he arrived at the All England Club ranked 21, he was boosted by the Club’s grass formula inside the top 16.

And if his form in his two openers was anything to go by—just six games dropped in each of his straight sets wins—he was feeling close to his old self.

Edmund is a quietly spoken, undemonstrative character, and in typically understated tone, he reminded his supporters what he was up against:

But by the time Edmund played, he would have another incentive to thrill the home fans. He took to court just after England beat Sweden for a place in the semi-finals of the football World Cup. Could he ride that wave of energy?

In the first set, the answer was a definite yes. The Briton was brilliant, attacking from the off, throwing in a chip and charge, and pummelling his famous forehand. In contrast, Djokovic struggled with the pace and perhaps the sun on a glaring and sweltering centre court. Edmund got the first chance in the seventh game with that forehand, would need four attempts to get it done, but break he did.

Champion that he is, Djokovic roused himself to try for the immediate break back, and had Edmund under huge pressure, but the Briton held, and showed more grit in coming back from 0-30 down to serve out the set with some mighty serving, 6-4.

It did not take long for Djokovic to get the measure of his opponent, and he plied the weaker backhand wing with his own outstanding double-hander. He also went on the offensive, and Edmund’s serve became less effective. The Briton held on in the second game but was increasingly on the back foot on serve, and the Serb broke for 5-3 despite some sterling efforts by Edmund to save three break points.

Djokovic held for 6-3, and broke straight away in the third as more errors flowed from Edmund. Even with the crowd chiding the Serb after a time violation, the Briton could not contain the ruthless baseline patterns, and Djokovic broke again, serving out for 6-2.

Edmund tried to dig in, and resisted the constant pressure from Djokovic in the first games of the fourth set. He got lucky in a long seventh game, where bad calls peppered some intense minutes, and he was not called on a double bounce return that then went out. However, he stayed alive through four break points, and Djokovic had to battle hard to contain his emotions.

He did, though, and channelled them into a couple of immaculate games, a love hold, a break, and then he served it out, 6-4, after almost three hours.

So the Djokovic rejuvenation continues, and with something close to that old intensity plus an improved serve: He out-served Edmund 18 aces to 11—and on all the other measures, both serving and receiving.

Compared with the other quarters in the draw, this one has brought relatively few upsets. Certainly, No7 Dominic Thiem should have been here, but was forced to retire injured in his first match. However, the towering 22-year-old Karen Khachanov who benefitted most from the withdrawal was not an unexpected presence. He made the third round at Wimbledon last year, and he now battled through the athletic 20-year-old Frances Tiafoe, who had put out veterans Fernando Verdasco and Julien Benneteau, to win in five sets and three hours, having trailed by two sets to love. He, it is, who now takes on Djokovic.

But one more surprise did unfold as Djokovic worked his way to his 44th fourth-round at a Major—a number second only to Roger Federer.

Ernests Gulbis, the other unseeded man in this quarter, burst onto the scene with flamboyant but sometimes undisciplined talent to win his first title at 21, reached the semis of the French Open and a career-high No10 in 2014, but then slipped out of the reckoning and played few matches last year to slip out of the top 200.

But this year, age 29, he had taken the hard route back in Challengers, and into Wimbledon via qualifying. He reached the third round by winning two gruelling five setters, and there took on the No4 seed Alexander Zverev, a player many have tipped as a future No1.

The 21-year-old German came back from a stomach virus to prove hit mettle across two days against Taylor Fritz, winning in five. He showed that mettle again—and his increasing fitness and physical resilience—after losing the first set to Gulbis, to edge the next two sets. But this too would go to five, and the Latvian showed just how hard he has worked to get into great physical condition: He won his third five-setter in a row, 6-0 in the fifth, after three hours and 20 minutes.

Gulbis next plays the 28-year-old Kei Nishikori, a former No4, owner of 11 titles, and often knocked back by injuries, but the Japanese man showed quite stunning form against the huge talent of Nick Kyrgios, another young player of prodigious ability, a quarter-finalist at Wimbledon as a teenager in 2014, and twice into Round 4 since. But he had no answer, for the fourth time in their head-to-head, to the all-court speed and variety of Nishikori, an hour and a half straight-sets victory.

So what all this comes down to is that 31-year-old Djokovic is the oldest remaining man in this quarter, mixing it up with the young guys, but looking as though he has no intention yet of giving way to the younger challengers. He seems to have, more than in a long while, that fire in his belly.