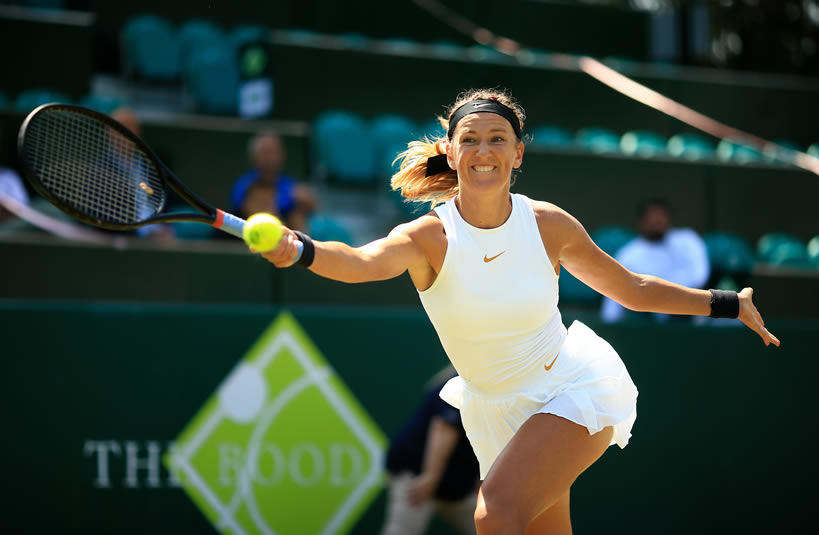 The second-round match between Victoria Azarenka and Karolina Pliskova carried huge significance for both women.

It was not that they had not played for a long time: Two of their five previous meetings had happened this year, with a win apiece. Rather, it was more to do with personal milestones.

Pliskova achieved one of the biggest targets for any tennis player last year: She reached No1, though it was not in perfect circumstances. She rose to the top for seven weeks after Wimbledon, despite losing in the second round. It all came down to her results in the previous months, and the result of her rivals at The Championships—c’est la vie in tennis rankings.

But there is more to Pliskova’s Wimbledon story. In this her seventh visit here, she had yet to get beyond the second round. It was becoming something of a bugbear. She had only just made it to the second round this time, too, after being taken to three sets by the young British wild card, Harriet Dart. And she faced a considerably bigger barrier if she was finally to break through to the third round.

An unseeded Major champion and fellow former No1 was in her way, Victoria Azarenka. The two-time Australian Open champion, winner of 20 tour titles, and with 30 match-wins on the grass of Wimbledon—including two semi-final runs—was in the main draw courtesy of an 87 ranking. But circumstances over the last two years had conspired to keep her pegged back from her former level.

She took a break from the tour in 2016, when she had risen back to No5 in the ranks following one of the most difficult achievements in tennis, the back-to-back double of Indian Wells and Miami. She had her son at the end of the year, and attempted her return from maternity leave on the grass last summer—at Mallorca and then Wimbledon. She had a protected ranking, but had no concessions as far as the seedings were concerned.

She still made it to the fourth round at the All England Club, but that would be her only Major in a span of almost two years until the French Open last month. For she had become embroiled in a custody battle for her son and was unable to travel—yet ranked 186, she still made the semi-finals in Miami.

And then finally she was on the road, able to travel to Europe for the clay, and was back inside the top 100 again. But at Wimbledon, she faced the [ill] luck of the draw, and that meant that after a first win against Ekaterina Alexandrova, she faced Pliskova.

She talked about her dilemma before the match:

“Draws have never been kind to me my whole career, so I didn’t really expect that to change much. Maybe one day [smiling]. You never know.

“But what’s important for me is to give myself a little bit of a break, and really try to enjoy to play, to find that fun on the court again through the hard work, because, you know, it’s been a tough year.”

She was right, but she looked fit, sharp, and had that old intensity: and she needed it right from the off. She had to fight tooth and nail to hold her opening service game, via four deuces and two break points.

She survived, and they stood at 1-1 after 11 minutes of play. But Pliskova was zoned in, hit a stunning return of serve forehand for 15-30 in the third game, and broke for 3-1.

The bombardment continued, as Piskova went after Azarenka’s second serve, pushing her to deuce again. She survived again, and chastised herself when she failed to capitalise on a small chance—though there were precious few. She held to love in the eighth game, but Pliskova made no mistake serving it out, 6-3.

The second set felt closer, and Azarenka’s level responded well to the pressure. She had Pliskova at deuce in the fourth game, but she could never work a break opportunity. Instead, one weak game from herself and she was broken. Pliskova, this time, would not pass up the chance of making the third round, and fired off a huge forehand to hold, 5-3.

Azarenka, now tight and making too many errors, double faulted twice to bring up match point, and Pliskova seized it with one final winner, 6-3. It had taken the tall Czech woman just 72 minutes, but she was still not entirely satisfied.

“I still think it was not completely perfect, but it was close to, let’s say, seven or eight… I still think I can serve much better than I served. It was enough today… It was so far one of my best matches on grass, for sure. She’s always tough, so it’s never easy.”

Azarenka had no concerns about her fitness:

“I think physically I’m very fit right now… Probably better than I have ever been before. But to be able to connect that with my tennis, it’s been challenging and a little bit frustrating in a way.”

Of course, life both emotionally and practically more difficult for her now that she is travelling with a young son, and doing it solo. Serena Williams has talked at length about the challenges of returning to the former level after the rigours of childbirth—and in the American’s case, she had many post-partum health issues. But she is not coping alone, and she did get that extra boost into the seeds from the All England Club.

“Well, my mother is helping me out, which is really amazing… The challenge is still to find the balance where I’m able to take some time for myself, which I don’t like to do, and when I go out and practise or play, to be OK that I’m not spending this time with my son. So, I think it’s still a balance that I need to do better at, but I’m learning.”

Perhaps Wimbledon came a little too early for her on the road back up the ranks. But once she is back on hard courts, watch her rise back into the seedings by right.

Fellow mother Williams did continue her progress to the third round, beating Bulgarian qualifier Viktoriya Tomova in a little over an hour.

Her elder sister Venus, five-time Wimbledon champion and No9 seed had a tougher battle, but came through in Pliskova’s eighth of the draw, beating Alexandra Dulgheru, 4-6, 6-0, 6-1.

However, there were upsets, notably No2 seed and Australian Open champion, Caroline Wozniacki, who had the chance to return to No1 if she made the final here.

It continued her surprisingly poor run in her 12th visit at The Championships: She has never made it beyond the fourth round. And she will depart in the second round this time after losing a tense thriller to Ekaterina Makarova, 6-4, 1-6, 7-5.

Makarova will now face another unseeded player in the third round, Czech Lucie Safarova, who beat No32 seed Agnieszka Radwanska.

Wimbledon 2018: Katie Swan may be out but is not down as she eyes the next Major