Semi-finals, the bottom half: Serena Williams sets up a last-four meeting with German Julia Goerges at SW19

By the time the bottom half of the women’s draw took to court to determine the second set of semi-finalists, the top section was already done and dusted. It turned out that the cream rose to the top: Two Major champions, Angelique Kerber and Jelena Ostapenko, would contest one of the places in the final.

Three of the four players in the bottom half were appearing in the Wimbledon quarters for the first time: Kiki Bertens, Julia Goerges, and Camila Giorgi. Indeed, the latter pair had never played any Major quarter-final. But in the minds of many, the most sure-fire semi-finalist of the quartet was the fourth woman—despite currently being ranked 181: Serena Williams.

Not that the seven-time former champion was the tournament favourite before Wimbledon began. She had, after all, played only seven matches in three tournaments this year—in fact, since leaving the tour on maternity leave 18 months ago. And in her scheduled eighth match, the fourth round at Roland Garros, she had been forced to withdraw with a pectoral injury.

What chance, then, even with a discretionary seeding of 25, that she would be ready for the rigours of Wimbledon’s grass?

Well the fact that she had survived an early culling of seeds that included the entire top 10, and made it to the last eight, was an indication that she was in good shape. That she got to the quarter-finals without dropping a set was even more impressive.

Certainly, she had not faced a seed—but then there had been few she could face. Four other seeds in her quarter, including No5 Elina Svitolina, all lost in the first round, and Madison Keys was put out before a Williams clash.

Williams’ fifth opponent, Camila Giorgi, had enjoyed a similarly smooth ride after beating No21 seed Anastasija Sevastova, in her opener, but the world No52 now faced Williams. What’s more, she had spent more time on court than any other woman, almost nine hours—and had lost all three previous meetings against Williams. Would her bold net-attacking tactics—and she had won 73 points at the front of the court thus far—break the pattern?

In the early goings, it certainly looked as though that would be the case. The 23-time Major champion looked off the pace as the Italian attacked from every quarter, and the break came in the fourth game. Williams had a quick chance to break straight back, but Giorgi was impressive in holding her ground, fought off another break point, and held for a 5-2 lead.

With just 35 minutes on the clock, the Italian had taken the first set from Williams this Wimbledon, 6-3.

It was not as though Williams was playing poorly, either. She made only two unforced errors in the set, but the pressure of her opponent had forced 17 errors, mostly off the backhand wing.

That would change, as Williams clenched her fist, dug in, worked a break for 3-1, which was enough to see her through another 35-minute set, 6-3.

And the confidence of the champion, who had won the title here in her last two appearances, 2015 and 2016, came to the fore. Williams broke in the third game, and again that was enough. Giorgi was admirable in her resistance, and she kept her unforced error count low—just 14 for the match—but it was not enough. To seal the deal, Williams served out the win to love, 6-4.

It was ever thus. Because Williams statistics, and determination not to lose, produced 24 winners for only nine unforced errors in the match.

There was a similarly intense battle unfolding on Court 1 that would produce Williams’ opponent in what will be the American’s 35th Major semi-final.

It featured the two higher ranked players in this half, No13 Julia Goerges and No20 Kiki Bertens. The latter was proving to be something of a giant-killer in beating Venus Williams and then Karolina Pliskova, despite the Dutch woman’s best previous results coming on clay—this year, the title in Charleston and the final in Madrid.

Even Bertens herself was a little surprised to have made it this far at Wimbledon for the first time:

“I think I was not even really hoping for this. Maybe hoping to win a round or two. But to be in the quarter-finals is unbelievable.”

In fact both women, good friends and former doubles partners, were playing in their first Wimbledon quarters, but Goerges came here on the back of five straight first-round losses, plus two losses in her previous matches against Bertens.

The two remained locked in the early stages, until Bertens got a timely break in the eighth game and served out the set, 6-3.

But Goerges quickly retaliated in the second set to break for a 3-1 lead. Bertens levelled in the eighth game, and they stayed locked again through almost 50 minutes and what looked destined to be a tie-break. But a last-minute break by the German, 7-5, took it to a third decider.

And once there, the errors piled up for Bertens, 11 of them, while Goerges played assured, aggressive tennis to break her weary opponent twice on the way to a 6-1 conclusion after almost two hours.

So Williams will play Goerges come Thursday, for a third time. And as is so often the case, she goes into the contest with the psychological advantage of a 3-0 winning record, and one of those in her last tournament, the French Open.

And Williams’s parting shot from her press conference would not have helped, had Goerges been careless enough to listen:

“For me, you’re only as good as your last win. It’s been a while since I’ve won a championship… I hate losing. I mean, that’s no secret, but you got to lose. I feel like every time I lose, I get better. I think it’s important for me to have the losses. Just the fewer the better.”

And if that was not enough of a threat, Andy Murray, in conversation on the BBC after the today’s match, added:

“It will be tough to bet against her.”

He is not wrong. 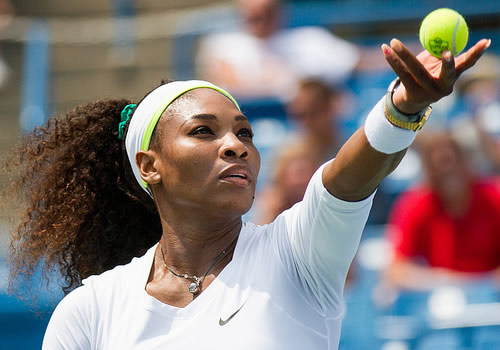