Marianne Bevis looks ahead to the women's singles at Wimbledon, where Garbine Muguruza is the defending champion 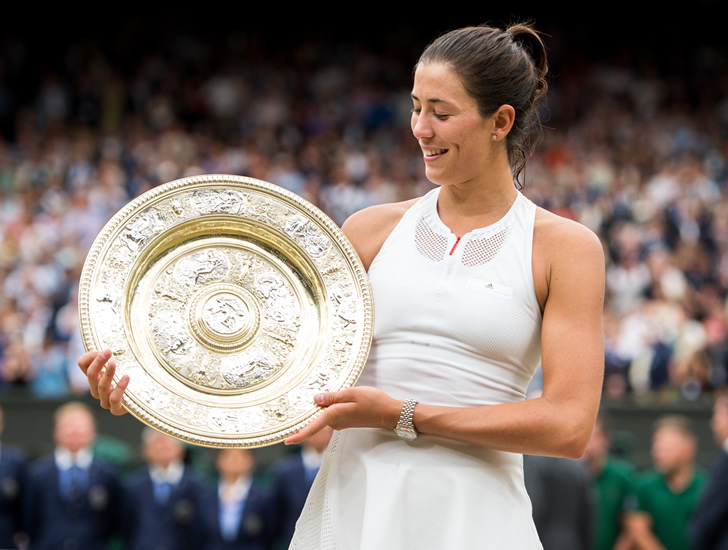 The news that the All England Club had given seven-time Wimbledon champion Serena Williams a discretionary seeding this year was the final phase of a long-debated story.

Williams is currently ranked 183 following an extended break for maternity leave after she won the Australian Open 18 months ago, but she was seeded No25 for The Championships that begin next week.

For while there is a formula applied to the men’s draw to compensate for the unique qualities of playing on grass, the same does not apply to the women’s draw, though the All England Club can make an exception if it is “necessary to produce a balanced draw”.

And if anyone has less to prove on grass or at Wimbledon, anyone whose sheer presence in a draw will make her one of the favourites—irrespective of whether she has played a lot or a little—it is Williams. In her case, she won the last two Wimbledons she played, in 2015 and 2016, was ranked No2 in the world when she won in Australia last year, and subsequently returned to No1 for 10 more weeks.

She gave birth last September and suffered multiple post-partum complications, but returned to competition remarkably quickly, at Indian Wells in March this year. But she opted out of the clay swing to work on her fitness before the French Open, where her run was truncated after three good wins due to a pectoral injury. She arrived at Wimbledon with just seven matches in her locker.

A boost for Serena

So it was a bold move to break with tradition and not just give her a place in the draw via the protected ranking system but to effectively displace the No32 seed—in this case a former Major finalist, Dominika Cibulkova—to give Williams a boost on her return to Wimbledon’s grass.

Even with so little competitive tennis in the last year and a half, her resume ensures that many regard her as a serious threat for the title: 86-10 match record, seven titles from nine finals, 23 Majors in total—plus 14 Major doubles title—and a gold medal on Wimbledon’s grass in 2012.

Her draw? Well it could be worse: The only other Major winner in her quarter is No2 seed Caroline Wozniacki—who has never got beyond the fourth round at Wimbledon, though she arrives with the Eastbourne. First, Williams may find No10 seed Madison Keys a handful if she negotiates Elina Svitolina, whose best result here has also been the fourth round.

Petra Kvitova rises back into form

But even if Williams is back to full fitness—and stamina—many see the tall figure of another former champion as favourite to pick up a third Wimbledon title: Petra Kvitova.

Her backstory, too, is also well-recorded and compelling. When she won the big Madrid Premier this year, it was a salutary reminder that only a year before, she was yet to return to the tour after an attack at her home in December 2016 almost ended her career. Doctors surgically repaired her playing hand, with no certainty that it would return to its former strength.

The mental fortitude that brought her back, six months after the attack, to play at Roland Garros, and from there to win on the grass of Birmingham, is remarkable in itself. This year, though, she has taken things up a level: five titles across three surfaces, a 37/7 run for the season, with seven top-10 victories.

She arrives at Wimbledon with the Birmingham grass title, and a ranking of No8 from 29 at the start of 2018. It is a story and a half, and she admitted this weekend that she is perhaps as fit as ever—even if her hand will never be 100 percent again:

“Overall on the fitness I just try to be quicker. It’s just kind of different because my body feels different, as well. I do think I have a little bit more muscle than I used to… I’m getting old, as well a little bit, so there are some exercises which I need to be still healthy, be in the shape.”

She does indeed look in very fine shape: slender, strong and glowing. But she has a succession of Major winners lined up and some significant others, not least fellow former champion Maria Sharapova or former French Open champion Jelena Ostapenko, herself a quarter-finalist here last year. As the for the quarters, there could be home favourite Johanna Konta or world No1 and French Open winner, Simona Halep.

It will not be easy—but as she said:

“I couldn’t really imagine myself having six titles since I come back… Just played good. Already satisfied. It’s been great few months.”

Can Wozniacki get her Wimbledon breakthrough?

It seems extraordinary that someone who rose to No1 so early in her career, regained the top spot this year, has twice been runner-up at the US Open and won her first Major in Australia this year should have found Wimbledon such a challenge. Wozniacki is super-fit, super-focused, highly talented, but has never got beyond the fourth round.

This time, she arrives with the Eastbourne title and some big scalps: Konta, Ashleigh Barty, Angelique Kerber and the very impressive new kid on the block, Aryna Sabalenka. As the No2 seed, Wozniacki will have to play on Monday having raced up to London for press duties Sunday.

But if anyone has the stamina, Wozniacki does. If she can get by the returning Agnieszka Radwanska and powerful Coco Vandeweghe, she will at last make it to the quarters—and a possible meeting with friend and rival Williams. It would be their first match in almost four years, their 12th overall, and the Dane has managed just one win. Perhaps, this time, she has the upper hand.

Then there is the No1 ranking: Halep vs Wozniacki

Simona Halep, bursting with confidence after finally winning her first Major in Paris, has had a superb season—a worthy No1. Besides winning the French Open, she made the final of the Australian Open and Rome Premier, and the semis at Indian Wells and Doha, a 35-6 season.

And it is easy to forget that she has made the semis at Wimbledon before. She is in a heavyweight quarter, with Konta, Cibulkova, Ostapenko, Sharapova and Kvitova, but she will be favourite to hold onto the No1 ranking. Wozniacki needs to reach the final at least, and if Halep makes the semis, it is job done for the Romanian.

No4 seed Sloane Stephens also has an outside shot after winning the US Open last year, finishing runner-up at Roland Garros, and winning one of the biggest WTA events this year, Miami. Her only realistic chance is to win the title—and see Halep lose early. And as she has a tough draw—first Donna Vekic, with Venus Williams, Karolina Pliskova, and the unseeded Sabalenka and Victoria Azarenka as possible quarter-final opponents—her chances, for now, look slender.

What about former No1s Pliskova, Sharapova and Kerber?

For a woman with such a big, attacking game, it is surprising that Pliskova has never made it past the second round at Wimbledon, especially as the US Open finalist in 2016 has won a grass title before her last two Wimbledons. Not that such success has traditionally yielded rewards: No woman since Sharapova in 2004 has won Wimbledon after winning a lead-in event.

Kerber has enjoyed some success at Wimbledon: She was runner-up in 2016 and a semi-finalist in 2012, and with a semi run in Eastbourne and a decent draw, she could ruffle feathers again. She does, though, come up against defending champion Garbine Muguruza in the quarters.

So to Sharapova, a winner here as a teenager 14 years ago. She went on to build a 46-12 record at Wimbledon, with the final in 2011 and three more semis. She is currently ranked 24, and put together some good results through the clay swing. How they translate to grass, where she has played just a couple of exhibition matches, remains to be seen, especially in a tough eighth with Ostapenko and Kvitova.

This time last year, Muguruza dropped only one set on the way to her second Major title, and she was runner up in 2015. She, too, briefly rose to No1 last year, and should make the fourth round without too many problems. There, she could meet the tricky No14 seed Daria Kasatkina, though former Wimbledon finalist Eugenie Bouchard has come through qualifying to sit here, too. The quarters bring No6 seed Caroline Garcia or Kerber—but at her big, bold best, Muguruza could turn it on on the big stage again.