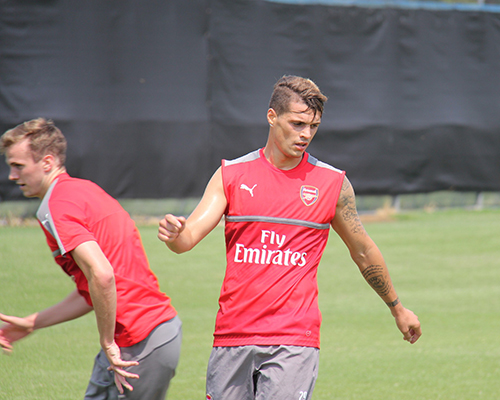 Ray Parlour has warned Granit Xhaka that he is facing a battle to keep his place in the Arsenal team.

The Switzerland international has struggled to impress since his £33m move to Arsenal from Bundesliga giants Borussia Monchengladbach in the 2016 summer transfer window.

Xhaka has been unable to find a level of consistency and his recklessness has attracted criticism as Arsenal missed out on a top-four finish in the last two Premier League seasons.

The 24-year-old signed a new long-term contract with Arsenal in the summer following the appointment of Unai Emery as Arsene Wenger’s replacement back in May.

Xhaka started Arsenal’s 2-0 loss to defending Premier League champions Manchester City at The Emirates in their season opener before a 3-2 defeat by Chelsea FC at Stamford Bridge.

Arsenal signed Lucas Torreira in a £26m deal from Serie A giants Sampdoria in the summer transfer window before French teenager Matteo Guendouzi swapped Lorient for the Gunners.

Former Gunners star Parlour believes Xhaka’s position in the Arsenal team is under threat based on the Switzerland international’s unconvincing start to the season.

“Xhaka looked to have a good World Cup, so it’s hard to say what’s wrong with him now,” Parlour is quoted as saying by Metro.

“He looks like a guy who takes a bit of time to get back into the rhythm of playing week in, week out after a break, especially with the new manager.

“But there are players breathing down his neck. If he doesn’t do his job, he won’t be in the team.

“The form players deserve to play. He has to knuckle down and he has to play well.”

Arsenal finished in sixth place in the Premier League table to miss out on a place in the Champions League for a second successive season.