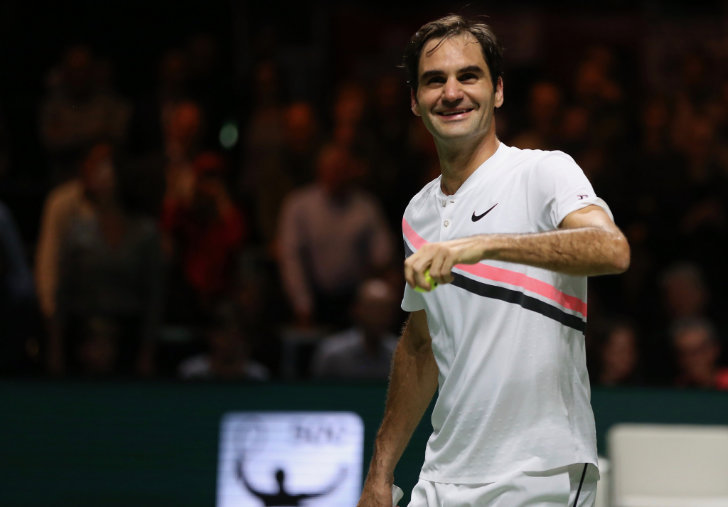 This has been a long, rough week for the fans, organisers and, most of all, players at the Cincinnati Masters.

If the rains had been disruptive in Washington at the start of this hard road to the US Open, and troublesome at the Toronto Masters last week, Cincinnati had tested both patience and stamina to their limits.

The schedule was already behind by the start of play on Thursday—traditionally the day when 16 man vie for a quarter-final place. But so dreadful was the weather that only two of the eight matches were completed. Fortunately, there was at least time to squeeze in the last remaining second-round match. Juan Martin del Potro beat Hyeon Chung in an impressive 80 minutes: He had clearly seen the weather forecast.

For the rain, when it came in Cincinnati, washed away previous records. Over five inches made it the wettest ever August day in the region since records began 150 years before, and the second-ever wettest day, full stop, in Cincinnati.

The players waited, and waited some more. A few began their matches in the gaps between downpours, while the rest were trebling up on practice courts in the short windows of ‘dry’ weather. But eventually the plug was pulled, as the weary hours of waiting and hoping came to nothing. They had to do it all over again on Friday.

In truth, the forecasts did not give much cause for hope on the now-packed Friday schedule. Storms were predicted, and they did indeed circle the Lindner Family Tennis Centre in Mason, but one by one, the last 16 became the last eight—but that was not enough to save the week’s schedule. Those eight had to be reduced to four, so almost every man had to play twice—and the unfortunate ones would have to play two entire matches.

The longest and latest match would bring together two old rivals, friends and compatriots for the first time since they contested the Indian Wells final in 2017. The season before that final, Federer had missed an entire six months following knee surgery. Later the same year, Wawrinka would also miss six months after double knee surgery, but through a stop-start first six months in 2018, he was beginning to regain his old form.

Still ranked too low at 151 to be seeded, the 33-year-old Wawrinka had gone 6-11 in match-wins until the Rogers Cup in Toronto last week, notching up six first-round exits. But his come-back win over Nick Kyrgios, then a final tie-break win over Marton Fucsovics, followed by a gritty 5-7, 6-7 loss to Rafael Nadal in the third round, showed that Stan the Man was beginning to thrive on the North American hard courts.

But his fitness would now be truly tested. He had certainly looked in fine fettle in beating first No12 seed Diego Schwartzman in three sets, then the dangerous Kei Nishikori in two. Now he would have to play Fucsovics again on Friday afternoon for the chance to play in the quarters the same evening.

And he won again, advancing in under an hour and half for the loss of just seven games. Now he would watch as, soon after, Federer attempted to do the same against Leonardo Mayer.

The elder Swiss was delayed a little longer than necessary not by rain but by giving up a 5-1 lead in the tie-break before sealing the win in 72 minutes, 7-6(6). And he was excited at the prospect of facing Wawrinka—with good reason:

“Playing against Stan is obviously a treat. Ten years and two days ago we won the Olympic gold together, and we’re still playing—I’m very excited to play against him, and it’s great for him. I’m happy to see him back again.”

Since their first Friday matches, Novak Djokovic had survived a Milos Raonic who served for the first set—only to be broken twice on double faults—and was a break up in the third. The Serb, who had earlier taken the remaining games of the third set against a carried-over match with Grigor Dimitrov, brooked no argument in closing out their long tussle, 7-5, 4-6, 6-3.

Former champion Marin Cilic, after finishing off his win over Karen Khachanov, was quickly back and beating No13 seed Pablo Carreno Busta, 7-6(7), 6-4.

The nimble No11 seed David Goffin had also shown plenty of his old skill in beating first one tower of a man, No6 seed Kevin Anderson, on one court, and then switching for his evening match to Grandstand court and another tower, Juan Martin del Potro.

The big Argentine had drawn on deep reserves to come back against Kyrgios after two superb sets of tennis, but Goffin got the better of him in two tie-break sets after almost two hours.

So Goffin, back in the locker room, would begin his recovery while Federer and Wawrinka played out their lengthy and compelling quarter-final after the completion of a similarly delayed women’s quarter-final. It would be a late start and late conclusion to their second long, long day at the Centre.

On paper, there was some urgency, too. Storms were breaking out just a mile away, and neither man would want to come back to finish on Saturday. But neither man would give an inch either. Federer had a chance to stave off a first-set tie-break with break points at 6-5, but the famed Federer forehand let him down.

And it did so again in the tie-break. After winning the first point, Wawrinka won the next six while fireworks lit up the sky across at Kings Island. Federer netted an easy volley, thumped a forehand long, and another into the net, his 23rd error. The admired Wawrinka backhand scored the winner and the set, 7-6(2).

In between some wayward errors on both sides, there were plenty of probing rallies that showcased the attacking style and single-handed backhands of both men. Yet Federer was in danger of passing up another winning position in the second set as he let go a break point chance at 5-5. Instead, it would be another tie-break conclusion.

This time, Federer grabbed the momentum, but Wawrinka’s movement and speed were good enough to turn defence into swift attack, and he closed the 5-2 lead to 6-6, as thunder ripped around sky. Now it was Federer’s speed and defensive skill that saved the day: He served out the set, 7-6(6).

However, the stoppage at 11pm for the thunder and lightning that flashed overhead was the last thing the duo with a combined age of 70 needed. By the time they returned 23 minutes later, many fans had given up hope of a conclusion, but fortunately they were wrong. Federer and Wawrinka, stretching and flexing hips and legs, stayed on level terms until the sixth game, which brought a break at the eighth attempt for Federer.

For good measure, he broke again for the match, 6-2, and the two embraced warmly after more than two and a quarter hours—and after midnight—to complete the 10th men’s match of the day.

Seven times Federer has won in Cincinnati: this will be his eighth semi-final. But should he make it to final Sunday, he may remember it as one of the toughest tests he has faced in Ohio.

Even if the weather does not play its part again—and Federer and Goffin are scheduled at night on a day when more storms are forecast—the Swiss will have his work cut out against a man 10 years his junior. Goffin also won their last match, from a set down, in the semis of the ATP Finals last November.

So just another day, and night, in the unpredictable life of a professional tennis player.