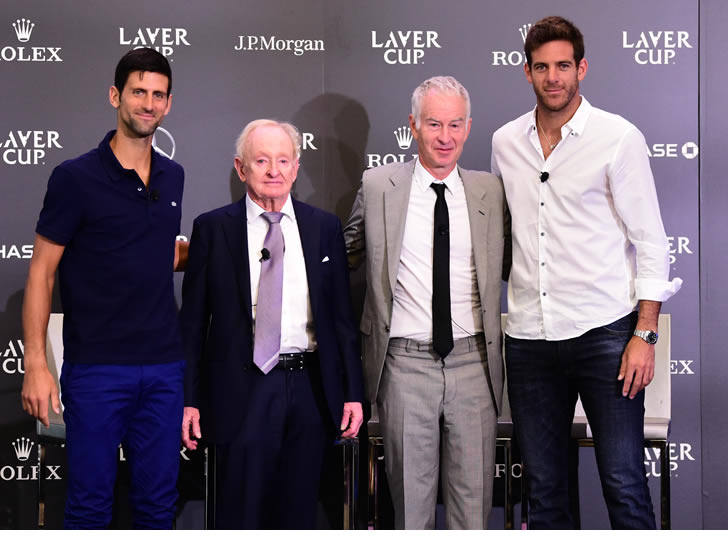 Novak Djokovic and Juan Martin del Potro will be in action at the Laver Cup Photo: Laver Cup

Legends of tennis gathered ahead of the US Open in New York this week to reveal the captains’ picks for this year’s edition of the Laver Cup.

Rod Laver himself was joined by John McEnroe, Novak Djokovic and Juan Martín del Potro to announce Kyle Edmund as the final member of Team Europe and Jack Sock as McEnroe’s pick for Team World.

The 23-year-old Edmund was ranked 50 at the start of 2018 before his breakout Major performance in Australia to reach the semis via wins over Kevin Anderson and Grigor Dimitrov.

With a final run in Marrakech and the quarters at the Madrid Masters, where he beat both Djokovic and David Goffin, he went on to beat Lucas Pouille in Rome and Andy Murray on the grass of Eastbourne.

Now ranked No16, he is nevertheless the lowest ranked man in a star-studded European line-up that includes No2 Roger Federer, No4 Alexander Zverev, No6 Djokovic, No8 Dimitrov and No10 Goffin.

It is, then, a chance to rub shoulders with the world’s best: Federer has won 20 Majors, Djokovic 13, and the two champions contested last week’s Cincinnati Masters title, with Djokovic becoming the first man to win all nine Masters.

“This is an extraordinary opportunity and I can’t wait to join all these great players in Team Europe. It’s a huge honour.

“Tennis is such an individual sport so it’s always very special to have the chance to play as part of a team. I watched the Laver Cup on TV last year and the atmosphere in Prague was amazing.

“I’m really looking forward to going to Chicago for the first time as well. I’ve heard they love their sport there, and although we are technically not the ‘home’ team, I’m sure we’ll get a lot of support.”

Europe captain Bjorn Borg was not present at the announcement, but said of his choice of Edmund:

“Kyle is an outstanding young player who’s achieved some great results and big wins over top players. I’m also impressed with his meticulous and methodical approach to the sport, and believe he will be a great fit with the team.

“Team Europe will be a force to be reckoned with in Chicago and we plan to mount a strong defence of our title… Roger and Novak have shared a rivalry over so many years, so it will be remarkable to see them come together in the same team.

“Roger and Novak are both incredible leaders in our sport and I expect them to inspire all the members of Team Europe in Chicago. It will be very special.”

Sock was part of the inaugural playing of the Laver Cup last year, and went on to complete a career-best season with his first Masters victory in Paris among three titles, and a semi finish at his first playing of the ATP Finals in London.

His high spot so far this year was claiming the Wimbledon doubles title with Mike Bryan, as well as winning in doubles in Delray Beach, Indian Wells, and Lyon with three different partners.

McEnroe said of his choice:

“Jack was an incredible asset to Team World at the Laver Cup last year… He’s the best doubles player in the world. He’s a great team player, as Nick [Kyrgios] is. I believe they’ll make each other better.

“I can’t wait to play Laver Cup again. It was one of the highlights of the year for me and I’m so excited about playing in the great sports city of Chicago.

“There’s no way we want to let Team Europe win here, on our home turf, and they know it’s going to be tough.”

“Laver Cup is a competition that unites us all. It was really unusual to see that but also very nice that all the players were there backing and supporting the player who was performing on the court every single day… New friendships were formed, some friendships were made stronger after that competition. I really look forward to it.”