It’s been a busy summer for new West Ham United manager Manuel Pellegrini, with a host of new signings sparking hope amongst the fans that the club is heading in the right direction.

Wilshere, Fabianski and Fredericks should have no problems settling in at West Ham, with all three players already familiar with the English game.
However, the other quartet of players may require a period of adjustment, meaning the club’s Head of Player Care, Hugo Scheckter, has an important part to play over the next few weeks.

As the infographic from Betway below shows, helping players settle in is a full-time job at top clubs. 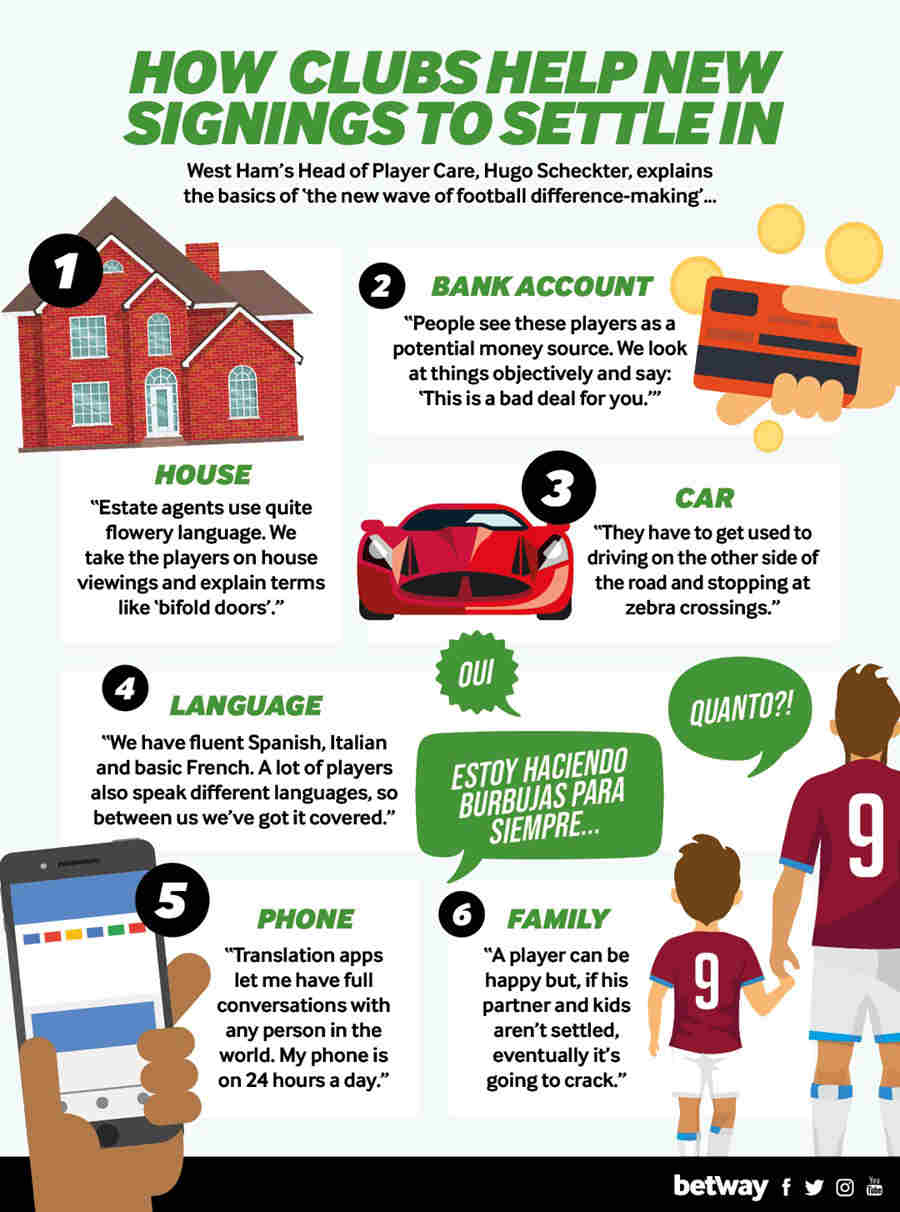 The acquisition of Anderson for £35 million is a major investment for West Ham, and Scheckter’s role in helping the Brazilian settle could be the difference between the winger being a hit or a miss in the Premier League.

“I believe that player care is the new wave of difference-making in football,” Scheckter told Betway during a recent interview.

“In the ‘90s it was medicine, more recently it’s been video analysis, and I think player care is the next area where clubs can really get an advantage over each other.

“By having players who are set up properly and looked after, it means they can focus on nothing but football as soon as possible after they walk through the door.”

While Scheckter will try and work his magic behind the scenes, the pressure is on Pellegrini to get the best out of his squad.

The Chilean has replaced David Moyes in the hot-seat and there are plenty of reasons to believe he can fire the club up the table playing a brand of football the fans will enjoy.

Pellegrini has won the title in Ecuador, Argentina and England, and while it’s unlikely he’ll lead West Ham to top spot next term he should make them entertaining to watch.

Every team he has coached over the past decade has been among the top six passers in their respective division and that is a statistic that will appeal to Hammers’ fans.

The London Stadium was a toxic place to be at times last season, but with Pellegrini in charge the club’s fans finally have something to look forward to.

Anderson in particular is an exciting addition, with his pace and vision previously drawing comparisons with Brazil forward Neymar.

If Scheckter can help Anderson settle and Pellegrini can find a system to best utilise his talents, West Ham could be set for a thrilling season.