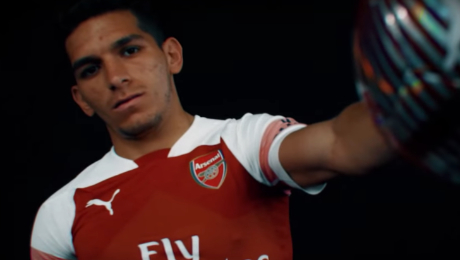 Club legend Gilberto Silva insists that summer signing Lucas Torreira is exactly the kind of player Arsenal have been missing for years.

Arsenal have not won the Premier League title since 2004 when they famously achieved an unbeaten season under the stewardship of Arsene Wenger.

With Gilberto and Patrick Vieira playing in holding midfield, Arsenal often won the physical battle on the pitch against their opponents, which was a key reason for their unprecedented success.

Fast forward over a decade and the club has struggled to add more trophies to the cabinet at the Emirates, winning four FA Cups in that time but falling away in the battle for supremacy at the top of the league table.

New head coach Unai Emery has been brought in to restore the former glory days to the club and he made a few key signings during the transfer window, including Sokratis from Borussia Dortmund and Lucas Torreira from Sampdoria.

The latter has featured in all four of Arsenal’s games at the start of the new season, but only as a substitute, despite seemingly having all the necessary attributes to give the team a new dimension in midfield.

He is in line for a place in the starting XI on Saturday against Newcastle United after recovering from a minor injury, as supporters call for him to play a more prominent role in the team as quickly as possible.

Club legend Silva believes that Torreira is the right man to play in the same position he did for Arsenal all those years ago, stating that he has been impressed by what he has seen from the Uruguayan.

As per The Evening Standard, he said: “I watched him in the World Cup. He did a very good job.

“If you see the way he plays, he plays the game very simply, he makes things easy for him on the field.

“He gives protection to the back four and support to the guys up front, he tries to find the best spot to be.

“The protective instinct is very natural for him. Before [Torreira] arrived none of the other players were the kind who would sit in front of the back four. It’s a hard job, not everyone wants to do it.”

Claude Makelele: What I really think about Maurizio Sarri at Chelsea FC