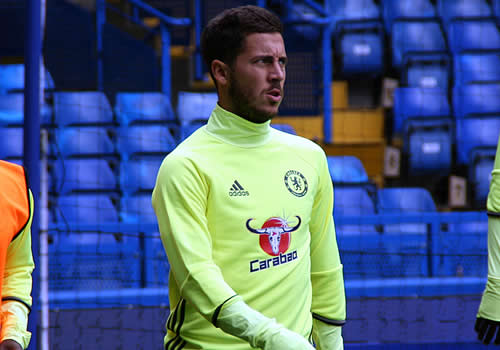 Eden Hazard has underlined the importance of Chelsea FC following up their League Cup triumph with a win against Liverpool FC at Stamford Bridge on Saturday evening.

The Blues came from behind to secure a 2-1 victory over the Reds in the Carabao Cup third round at Anfield on Wednesday night thanks to goals from Emerson Palmieri and Eden Hazard.

Former Chelsea FC striker Daniel Sturridge scored his ninth goal in nine League Cup games to break the deadlock in the second half of the Carabao Cup tie.

However, Palmieri, who moved to Chelsea FC from AS Roma in the January transfer window, levelled from close range to leave both teams facing the prospect of penalties.

While Chelsea FC will be satisfied with their third round victory, Maurizio Sarri’s side will be hoping to overhaul Liverpool FC in the title race at Stamford Bridge on Saturday evening.

“This result will give us more confidence because we drew with West Ham four days ago,” Hazard said.

“The game on Saturday [with Liverpool] is more important. We have got to try and beat Liverpool on Saturday.”