Laver Cup 2018: Roger Federer lays it on the line in back-to-back battles; saves match-points to down Isner 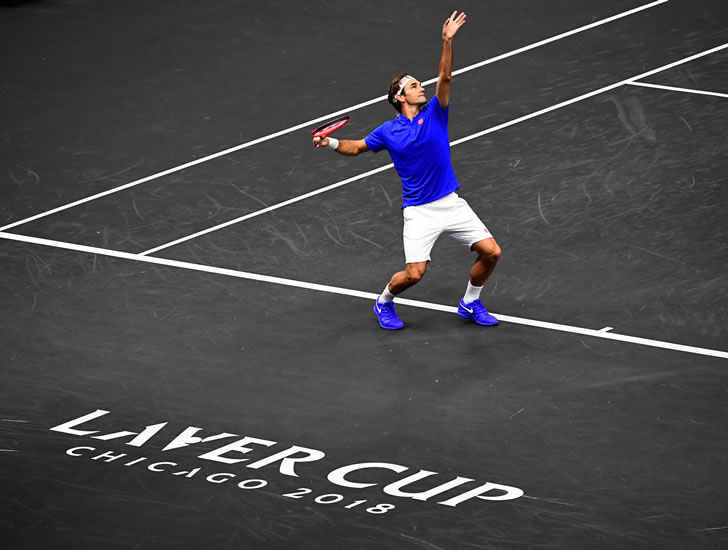 The third and deciding day of this year’s Laver Cup began in much tighter order than the first matches in Chicago had suggested.

The Blues of Europe had led 7-1 after Roger Federer swept past Nick Kyrgios on Saturday, playing like a man on a mission—and that after a gutsy, hard-earned win from Alexander Zverev over John Isner.

But Team World pulled out all the stops on Saturday night to close that lead. In particular, the Illinois-based Kevin Anderson, who made his second Major final in July before losing out to Novak Djokovic at Wimbledon, this time beating the 14-time Major champion in a thrilling singles win, 7-6(5), 5-7, 10-6.

With a victory from Jack Sock and Kyrgios over David Goffin and Grigor Dimitrov in the doubles, a six-point deficit was reduced to two, 7-5. And that meant the boys in blue had to win two of the remaining four matches on the final day.

First, it was another doubles showdown for Federer after losing with Djokovic on the first day. And now he and Zverev played arguably the best doubles player on the tour at the moment, Wimbledon and US Open doubles champion Sock, partnered with the big-serving Isner.

However, Federer and Zverev are no mean doubles players. While the Swiss seldom plays this format any more, he won Olympic Gold with Stan Wawrinka, and had seven titles from six further finals in doubles in his resume. He also, as he proudly pointed out with a smile, won the last doubles match he played with Rafael Nadal—in the Laver Cup.

Zverev also had a very decent doubles pedigree. Still only 21 years of age, he reached his first final with elder brother Mischa more than three years ago, one of four finals, and won his first title with his brother last year. He may have reached No5 in the singles ranks and won three Masters titles from five finals, but he was more than just a big serve-and-baseline game.

That Zverev now joined up with his childhood idol, and the man who had become something of a mentor to the youngster, may have brought pressure and nerves, or could instead inspire. It did the latter, and the blues came out firing on all cylinders. Federer brought up three break points in the third game with a backhand winner, and on a fourth chance, Zverev hoisted a lob onto the baseline to break, 1-2. It was enough for the first set, 6-4, in under half an hour.

But it lit up the American duo, who went on a serving spree. Three straight love holds threw into relief the tougher holds by Europe, but after some dazzling exchanges—especially the net intercepts by Sock and Federer—it went to a tie-break, with the almost inevitable consequences. The big-serving reds stormed to the set, 7-6(2). And worse, they now faced a super tie-break, first to 10 points.

In fact, Europe served for the match, at 9-7, but Sock pulled some magic passes from the top drawer to level at 9-9. Isner took the lead for the first time with an ace, and they scored the necessary point from the Zverev serve, 11-9. And for the first time in the tournament, too, Team World took the overall lead, 8-7.

All the more pressure, then, on two of the same men: Federer and Isner came back to pursue three more points, and it was certainly a bold call by Federer and captain Bjorn Borg to put the 37-year-old Swiss into the lion’s den for his fourth match in three days.

Federer held the advantage in previous meetings over the 6ft10in American, but lost their last—almost three years ago and in three sets. And this year, Isner had put together one of his best ever seasons: a first Masters title, a first Wimbledon semi-final, and a career-high ranking.

He also had fewer matches in his 33-year-old legs, a world-beating serve, and a brand-new baby at home to impress. Federer was up against it: He would, above all, have to serve well, and he did. Love hold after love hold took it to a tie-break, by which time he had dropped just one point on his serve. Not that he had made any inroads on Isner either.

But it was now that the Swiss serve let him down. He took the initial lead, 4-1, only to give up that lead with his second dropped service point, and then his third on the first set-point. Isner cracked a stunning forehand to take it, 7-6(5).

Federer’s serve was the better in the second set, too, but Isner has that wonderful ability to produce aces at the key moments. Witness facing 15-40 in the seventh game: four aces in a row. It hurt, and Federer then faced his first break point of the contest—and a match point. But he rose to the challenge, and it went to another tie-break.

Isner edged the advantage courtesy of a hasty, poor drive volley from Federer, and a rare forehand error brought up two more match points, 4-6 to Isner. But twice the Swiss made winning backhands, one a cross court top-spin, the other a sliced, angle, and all at once, he had a match point of his own—and aced it.

So this intense contest advanced to yet another super tie-break, and Federer took the early lead, 3-0, only to see Isner fight back, and serve to a 6-5 lead. Four straight Federer points then put the match on his racket, 9-6, only to see the first chance slip away.

However, at the last time of asking, he dropped a forehand in, and jumped for joy. His 10-7 set put Europe back in the lead, 10-8, a bitter blow for Isner, but a triumph of mental and physical resolve from Federer, who had committed just 12 errors to 45 winners.

He even managed to share a team display of press-ups in celebration. Tired? Who’s tired? He admitted, though:

“I’m not sure if I wanted it to be that exciting but, oh man, what a match, what a weekend. Thank-you Chicago… Regardless of what happens, it’s been a successful week and weekend. We’ve loved it. I couldn’t be more excited for what’s to come now.”

And then found the energy to sprint back to the locker room for a quick word with Zverev, for it was now he who had to try and close out the Laver Cup against Anderson. And Federer was back on court with the team as the first set headed to a tie-break.

But no matter the outcome, in truth it would be hard to top what had been the match of the tournament.

Laver Cup 2018: Federer and Djokovic bond on and off court amid post-victory Europe euphoria