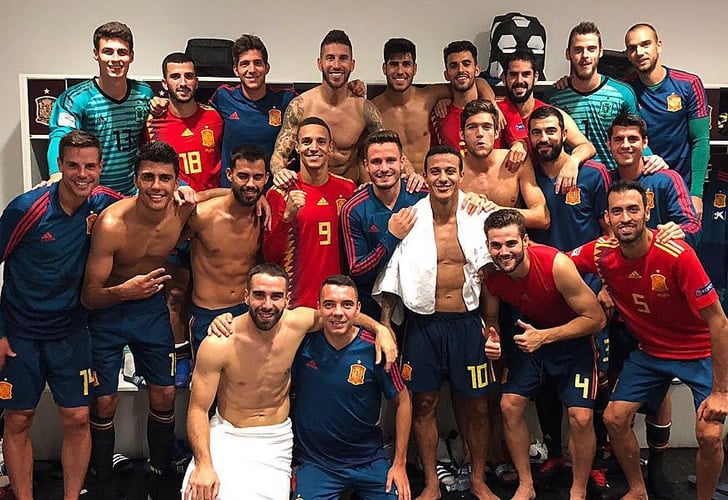 David De Gea was all smiles as he posed for a victorious picture with his Spain team-mates following their 6-0 thrashing of Croatia in the Nations League on Tuesday night.

Luis Enrique’s side were in fine form as they thrashed the World Cup runners up to make it two wins from two in the competition.

De Gea played the full 90 minutes for Spain as he helped them to secure the three points against Croatia.

Chelsea FC trio Alvaro Morata, Cesar Azpilicueta and Marcos Alonso all joined De Gea for a photo in the dressing room after the game.

Both Morata and Alonso were unused substitutes during the game, but Azpilicueta came on to play the final 15 minutes of the dominant victory.

Nevertheless, Morata was quick to take to social media to celebrate the victory, as he posted the picture above on his personal Instagram account and wrote the caption: “Vamos!”

The Chelsea FC striker will be hoping to feature for the Blues when they return to Premier League action with a home clash against Cardiff City on Saturday.

Meanwhile, De Gea will be expecting to start in goal for Manchester United when the Red Devils take on Watford away from home on Saturday evening.

Ruben Loftus-Cheek opens up about Cesar Azpilicueta at Chelsea FC