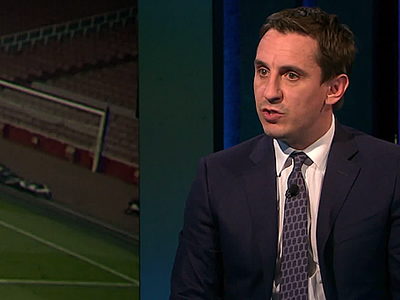 The England international played a direct role in three of Chelsea FC’s four goals in a 4-0 victory over Burnley at Turf Moor on Sunday afternoon.

Barkley teed up Alvaro Morata to make the breakthrough in the 22nd minute before the England star netted in his third successive Premier League game.

The 24-year-old completed his man of the match performance with an assist for Willian’s strike before Ruben Loftus-Cheek polished off a 4-0 victory to remain three points off the top.

Maurizio Sarri’s attacking approach has got the best out of Barkley in the current campaign after the England international struggled in his final few seasons at Goodison Park.

The Chelsea FC number eight has scored three goals and has made three assists in the Premier League and only Eden Hazard has contributed more to the Stamford Bridge outfit.

Former Manchester United defender Neville highlighted the improvements that Barkley has made since his switch to Chelsea FC from Everton in the January transfer window.

“[He has improved his] focus, concentration, physicality, and also [added] some rigidity,” Neville told Monday Night Football on Sky Sports.

“This idea that players can be free players and do what they want; it’s rubbish. Players like him need to know when to be where. He’s needs guidance and a framework and a platform.

Chelsea FC paid £15m for Barkley in January as Everton looked to secure a return for their youth product rather than lose the England international for nothing in the 2018 summer transfer window.

The Blues star made four appearances under Antonio Conte in the second half of the 2017-18 season to suggest Barkley could see his career further stagnate at the west London side.

However, Sarri has placed his trust in Barkley in the opening months of the campaign, indicating that the England star will have a big role to play at Chelsea FC under the Italian head coach.