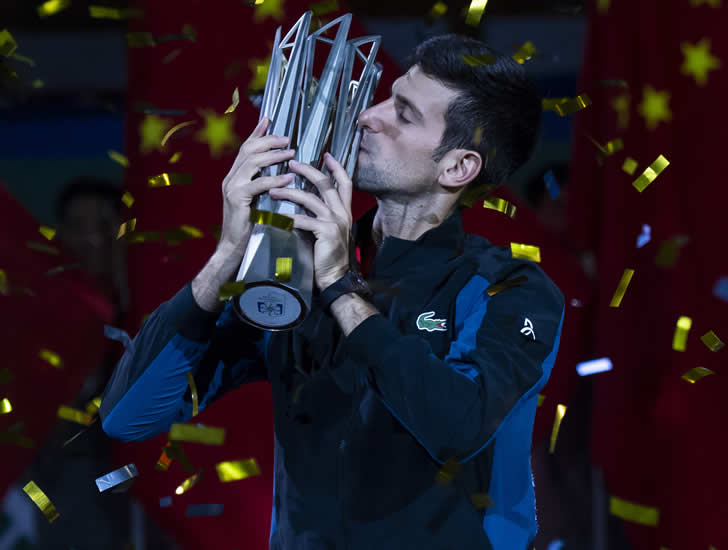 Novak Djokovic had looked like the favourite to win the Rolex Shanghai Masters a week ago, and so it proved to be.

First, there was his remarkable run into this most lucrative of Masters tournaments.

Since a persistent elbow injury forced him down to No22 ahead of the French Open at the end of May, he had lost just three matches and won three titles. And not just any titles: Wimbledon, the Cincinnati Masters—becoming the first man to win all four Masters titles—and the US Open.

Now with his fourth Shanghai Masters title, he has set a 27-1 run since the start of Wimbledon, and risen back to No2 in the world for the first time since June 2017.

Second, there was his unparalleled record in China. Since winning his first season finale—then known as the Masters Cup—at the magnificent Qi Zhong tennis centre in 2008, he had won nine more titles: three Shanghai Masters and six Beijing 500s. That amounted to a 68-9 record, and a perfect 10 in finals—bad news for the young man who faced Djokovic in the Serb’s 11th Chinese final.

That was 21-year-old Borna Coric, a great talent with a work ethic to match, who had already reached No33 in the ranks at the age of 18, made two finals, and arrived in Shanghai with two titles, one of them won over Roger Federer in Halle in June—and all that despite a break to undergo knee surgery at the end of 2016.

This was his first Masters final after making his first Masters semi-final in Indian Wells—where he came within touching distance of beating Federer. In Shanghai, he did just that, having also beaten Stan Wawrinka in Round 1. He was already assured of reaching a new career-high No13 with this Shanghai run, and even remained an outside chance to reach the Nitto ATP Finals in London if he could do the near-impossible in Shanghai.

Djokovic was Coric’s idol as a boy, and that played a big part in moulding the athletic baseline game and tactical astuteness of the young Croat. With his mental and physical fitness improving all the time, the rewards were coming, and he made big strides against Djokovic in Monte Carlo this year, losing 6-7(2), 5-7. But Djokovic’s rise to peak condition since then made this the ultimate test.

And Coric rose to the occasion well, but the danger signs appeared in the sixth game, after a growing tally of long, testing rallies. The Croat’s first serve let him down, and Djokovic took control from the baseline, running his opponent ragged with the depth and penetration of his shot-making. It was ruthless, leg-busting stuff, and drew the required error after a couple of deuces to break, 4-2.

Coric tried to step in and take the Djokovic serve earlier in the next game, and did get some traction, taking the Serb to deuce, and he went on to hold to love for 3-5.

But despite producing some fine backhand power to the corners, Coric was facing one of the best defenders ever to lift a racket, a man with the speed, anticipation and flexibility to reach everything, and return it with interest. Djokovic served out the set, 6-3.

Coric could not stave off the Serb at the start of the second set, either, no matter the admirable effort. A quick break, followed by a hold, and Djokovic was 2-0 up. Coric had to fend off break points in the third game, too, via repeated deuces against what must have felt like a brick wall—essentially, a better version of himself: Djokovic had made only 10 unforced errors to Coric’s 22.

The Croat was digging ever deeper, taking longer between points, and a few weary shots began to let him down. The crowd willed him on, cheering as he saved a fourth break point with a huge forehand, and then pulled off a smash winner. It took him 20 points and almost 13 minutes, but eventually Coric held the third game, 1-2.

However, it was an almighty task to break down the Djokovic one-two—serve and follow-through to the extreme corners. By the time he held to love for 3-1, he had dropped only one point on his first serve, 20/21—and Coric was back serving in the blink of an eye.

Again, he had to save a break point, but held on, 2-3, and found a surge of energy to force deuce in the next game. An explosive 90mph backhand winner then brought him a first break point, but a wayward forehand gave it up, and two fine Djokovic serves later, the door was slammed shut.

The mental fortitude of the 21-year-old shone one last time as he faced 3-5, 0-40—three match points—and he came up with a backhand winner and a smash among a string of five straight points to hold. But he now had to break to stay in the match, and that was a step too far. Djokovic was near-flawless in serving out the match, 6-4, to notch up his 18th straight win, his 47th consecutive hold of serve, and his 32nd Masters crown.

Of his performance, especially his serving—and he won 29-32 first-serve points in this match—he admitted:

“It’s phenomenal. Not many holes in the game in general, especially this week. Everything worked perfectly. This has been one of the best serving weeks I’ve ever had.”

He added, on his history of success in China:

“Maybe I was Chinese in the past life. I wouldn’t be surprised, with the way I feel here and the way I have a relationship with the people. It’s all very, very positive, for more than 10 years that I have been coming to China. There is something special about this place that makes me feel like at home.”

The victory takes Djokovic to within 35 points of Rafael Nadal in the ATP rankings race, and with big Paris Masters points still to play for. It is, indeed, looking increasingly likely that the super-Serb will pull off the year-end No1 for a fifth time, and very possibly a sixth ATP Finals title—a full decade after his first in this very Shanghai arena.

Three places remain, with a maximum of three more tournaments available to each player: three ATP250s next week, followed by two ATP500s the following week, and concluding with the Paris Masters.