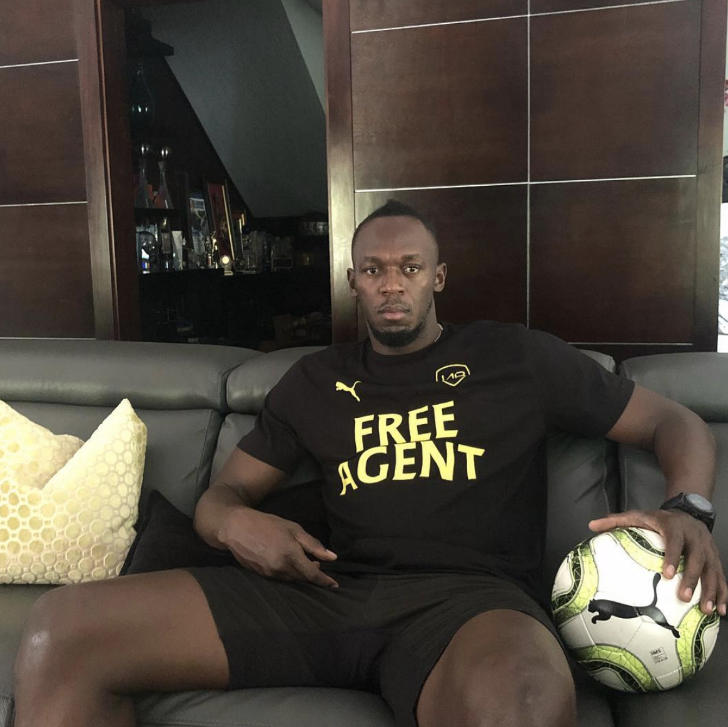 The A-League is set to get under way as champions Melbourne Victory look to defend the title they won a year ago.

Victory beat Newcastle Jets 1-0 in the Grand Final thanks to an early goal from Kosta Barbarouses, with Sydney FC’s 14-point lead at the top of the A-League heading into the close-season ultimately counting for nothing.

Those three clubs all look set to be among the teams to beat again this term, with the A-League’s opening weekend kicking off with Adelaide United v Sydney on Friday.

But the pre-season attention has been completely dominated by a certain sprint star.

Bolt to light up the A-League?

With so much speed in reserve, Usain Bolt could play for years.

Bolt’s record speaks for himself – he is probably the greatest athlete of all time – but can he really make it as a footballer?

With Bolt having previously had trials at Borussia Dortmund, fans of Central Coast Mariners could soon be about to find out!

Bolt has been training with the club and has featured in a couple of training matches, bringing lots of hype and attention to the Mariners ahead of the new A-League season.

And in a friendly against Macarthur South West United just a week before the campaign starts, Bolt scored his first goals for the club having been picked alongside the former Premier League striker Ross McCormack in attack.

Bolt’s first goal was very well-taken indeed, the Jamaican track superstar unsurprisingly outpacing a defender before rifling home a low finish. The strike was a clear sign his burgeoning football career is not just the A-League publicity stunt some critics have unfairly claimed.

While Bolt’s second goal was quite fortunate as he profited from a mix-up between the Macarthur South West United goalkeeper and his defence, two goals might just boost Bolt’s chances of being offered a professional contract with the Mariners.

“I’m happy I could come here and show the world I’m improving. I’m keen to be a Mariner, to play my best and get into the team.”

Can Bolt make it in the A-League?

Bolt’s stated dream is to play for the club he supports, Premier League giants Manchester United, but signing for the Mariners would be a great place to start.

And there is no doubt that Bolt’s presence in the A-League would result in a massive rise in the amount of attention being paid to Australian football by global media and football fans from all over the world.

Whether or not Bolt is going to be offered a deal by Central Coast Marines is still up for debate, but betting fans might be backing the Jamaican to become a footballer after all.

A-League betting is set to increase in popularity if Bolt does get a deal and AustralianCasinoClub has a guide to some of the best sportsbooks for football fans.

But away from the Bolt madness, how is the new A-League season shaping up?

The bookmakers have priced up Sydney FC to top the pile again and no wonder, given they finished a whopping 14 points clear of the chasing pack last term.

Victory and the Jets are also towards the top of the odds while Melbourne City should be in for a good season too, at least if the bookies prove to be correct with their predictions.

The Sydney derby on the second weekend of the season will be an early indication as to how the two sides are going to perform this year, although after only a handful of games managers will see their players head off on international duty in the middle of November.

Wellington Phoenix are the rank outsiders in the odds so they could be in for a season of struggle, with the bookies also not fancying the chances of Central Coast Mariners, regardless of them potentially giving Bolt a deal.

Around the middle of the betting odds lie teams including Brisbane Roar and Western Sydney Wanderers, indicating they could have a successful season if they get off to a good start, but may also find themselves towards the bottom of the A-League table if they lose focus.

Bobo has been the A-League’s star striker in the last couple of seasons but the 33-year-old has moved to Alanyaspor in the Super Lig, giving Sydney FC a bit of a headache in attack. Johnny Warren Medalist Adrian Mierzejewski has also left and will need to be replaced.

Mierzejewski and Bobo were responsible for around two-thirds of the goals scored by Sydney FC so it is going to be a very intriguing spectacle to see how the team adapts without them.

Adam Le Fondre and Siem De Jong are a pair of intriguing signings for the champions, though, and they should help to address the loss of Bobo in terms of goals.

Victory have perhaps made the most eye-catching new signings, with Georg Niedermeier coming in from Freiburg, while Keisuke Honda and Ola Toivonen have also joined the club.

Melbourne City’s link-up with Premier League champions Manchester City has helped them to secure Anthony Caceres, with Ritchie De Laet another player brought over from England.

The Jets have captured Jair Eduardo Britto da Silva and Matthew Ridenton among others, while former Newcastle United defender Steven Taylor will be playing for Wellington Phoenix.

A clutch of four Australia internationals have signed on the dotted line for Perth Glory and they could just become contenders as a result of their squad overhaul during the close-season.

Perhaps it will be in the dugout where the biggest change is seen, though, as Sydney are having to cope without their successful coach Graham Arnold, with Steve Corica stepping in. Arnold has left to take charge of the Socceroos.

The FFA Cup final at the end of the month will see Sydney take on Adelaide United and A-League fans can look forward to what is expected to be another season of exciting action.

Club Concierges: How teams keep their players happy and focused on the game