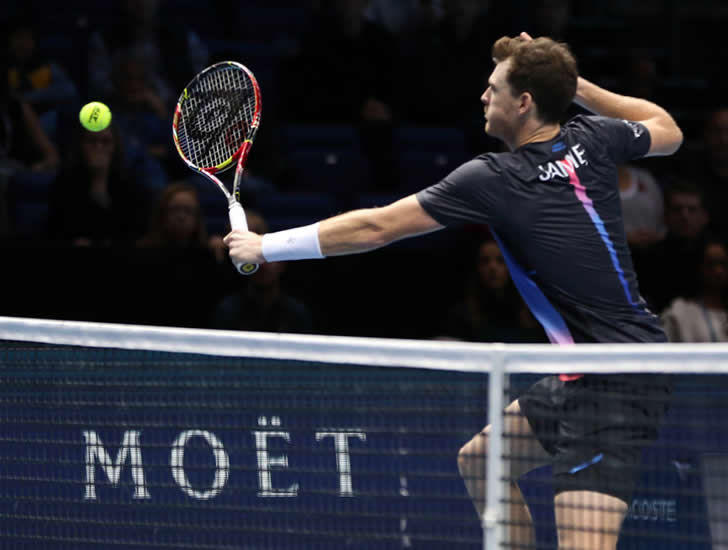 Jamie Murray has ticked just about every box when it comes to achievements in doubles tennis.

Major titles? No problem, two of them in that same year, at the Australian and US Opens.

Since 2006, indeed, the elder Murray brother—he is 32 to Andy’s 31—had won 22 titles and made a further 23 finals. And he ticked of another ‘first’ this summer in Cincinnati, his first Masters title.

He admitted ahead of his opening match in London this weekend, that it had meant a lot after reaching the final of four of the ATP tour’s elite tournaments.

“I mean for me, I want to win every tournament I compete in. I really wanted to win a Masters because I’d never done that before—I think we lost maybe four finals—so I was really happy in Cincinnati when we won. For me, that was a huge win. Bruno had obviously won two or three Masters before, but it was the first one together so it meant a lot to me.”

He referred to his partner of three years’ standing, Bruno Soares, who helped propel this successful partnership almost immediately to that first Major in 2016. The 36-year-old Brazilian has proved to be a near perfect match for the Scot: They complement one another in both their tennis and personality, and clearly get on very well.

And after a relatively slow start, they had built a head of steam through the latter half of the year to qualify fourth the World Tour Finals, confirming the third straight appearance of the partnership at the O2. However, here was the tick they had not yet made. Twice they had made the semi-finals, but the title remained elusive.

If the duo could do it this time, it would make Murray the first British man to win the doubles trophy at the season finale. And Murray was optimistic:

“That’s our goal. We know we’re one the best teams in the world so when we turn up at a tournament, we always turn up with the intention to win. For me, that’s been exciting the last few years: to always feel like you’re competing for these big, big events. That’s what makes it fun. We’re not just here to make up the numbers.”

They opened against the No6 seeds, Raven Klaasen and Michael Venus, both of whom had qualified for the second time—and Klaasen made the final on his debut. But this was their first appearance in London as a team.

What was Murray’s view of their chances of an opening win?

“It will be a difficult match. We’ve beat them a couple of times this year—fairly comfortably, I would say—but then we lost to them at Wimbledon, epic five-set match that finished under the roof. That was a sore one to lose.”

And Klaasen and Venus got the first break, served for the opening set, only for Murray and Soares to break for 5-5. It would go to a tie-break, and the first chink in the armour came at 5-5: Murray and Soares took a point against serve and sealed the set, 7-6(5), after just a few minutes short of the hour.

The second set began in similar fashion, a break to Klaasen and Venus for 2-0, but a quick break back to level, and this had the makings of another tie-break, until Murray’s first serve let him down at 4-5 to concede the break and the set, 6-4.

And so it went to a champions tie-break, first to 10. Now Murray and Soares upped the intensity and pace to take a quick lead, 4-1. Klaasen and Venus reduced the gap, 3-4, but the home support and some fine sharp reactions at the net carried Murray and Soares over the line, 10-5.

It was step one towards ticking that final box, but there are still bigger obstacles ahead, notably No2 seeds Juan Cabal and Robert Farah.

But then, as Murray said:

“I think probably we’ve beaten every team and lost to every team, so we know that all the guys are difficult on their day, and everyone is motivated to play here because it’s such a great platform for the doubles game. Everyone wants to be involved here and play well. There are no easy teams.”