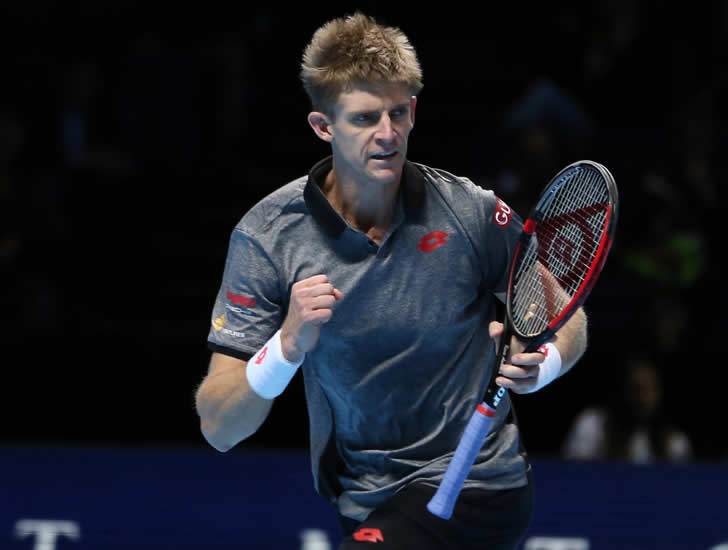 For it was 17 years ago, in 2002, that Roger Federer first qualified for the World Tour Finals, and through that entire period, the six-time champion had failed to play only once—in 2016, following a premature end to his season due to knee surgery.

And in a record 16 appearances at the tournament, he had failed to make it to the knock-out stage just once. That, too, was due to injury, a recurrent back problem that hit particularly hard in Shanghai in 2008.

There, he lost two of his round-robin matches, including the deciding and memorable three-setter against Andy Murray that lasted three hours, 6-4, 6-7(3), 5-7, and saw a grey-faced Federer take a rare medical time out on court, to no avail.

Along the way, Federer has won his record six titles from 10 finals, and won more matches than anyone else. But in London this year, things took on a decidedly different look for the Swiss.

On Sunday evening, in his opening match against Kei Nishikori—who had beaten twice in the last month—the Swiss suffered his first straight-sets loss in the round-robin phase of the tournament, his first in 46 round-robin matches.

Federer began the year on a high, following a stunning return from that knee-surgery in 2017. This January, he defended his Australian Open title, and went on to win in Rotterdam and regain the world No1 ranking. His unbeaten run since winning the Hopman Cup came to an end in the final of Indian Wells, and despite winning on the grass of Stuttgart, his form went off the boil in Halle, Wimbledon and the US Open.

He edged to his 99th title in Basel, but his 100th title had proved more elusive than expected. Perhaps the Swiss was feeling the pressure, perhaps feeling his 37 years, but his hopes of reaching No100 in London were hit in the front of 17,000 fans on Sunday.

In an erratic, error-strewn and frustrated encounter, he made 19 winners for 34 errors, only 50 percent of his first serves, and admitted of his imminent meeting with No6 seed Dominic Thiem: “I just know I need to do better than today. That’s pretty much it.”

His problem was that Thiem had also lost his opener, so had the same incentive to win the second match: The loser was as good as guaranteed to leave the tournament. And the Austrian, 12 years his junior, had won two of their three previous matches. In short, Federer had to find his timing and his form, and quickly.

The two men who played in the first match of the day had the opposite ‘problem’. Where Federer and Thiem had both lost their matches in identical scores, both Kevin Anderson and Nishikori had won their openers in identical scores. Another win in similar style could be enough to make the semi-finals.

And where Nishikori had performed below par against Federer, Anderson had put in another strong performance in a year of ever-improving form for the late-blooming 32-year-old.

Anderson had qualified for the tournament for the first time after reaching his first Wimbledon final, and he won two titles, including his first 500, and made the semis of two Masters. It was all the more impressive for the injury hurdles that the likeable Anderson had overcome through 2016-17: to knee, shoulder, ankle and groin.

But then Nishikori’s year had been a triumph of will over adversity. This year, the Japanese star had gone from No39 and playing the Challenger circuit following a wrist injury to playing at the season finale. He had also won 20 of his past 26 matches. Indeed, only a fortnight ago, he had beaten Anderson in Paris, but the big South African had started the tournament as well as anyone, and he began this match in similar form, breaking in the second game at the third time of asking.

Not content with that, he broke again, and denied Nishikori in a long sixth game, too, 6-0, 31 minutes. The statistics were stark: 88 percent first serves for Anderson, 44 for Nishikori.

The second set was just as one-sided. Nishikori struggled to find his first serve and struggled to handle the flat power of Anderson. Not until the sixth game did he get a game on the board, but it would not be a turning point. Anderson served it out, 6-1, after just 64 minutes.

He could only wait to confirm his semi-final place: If Thiem beat Federer, he was through; if Federer beat Thiem in three sets, he was through. It would probably feel a long six or so hours, but from a rather satisfying position.

ATP launches new logo and marketing campaign; will everyone ‘Love It All’?