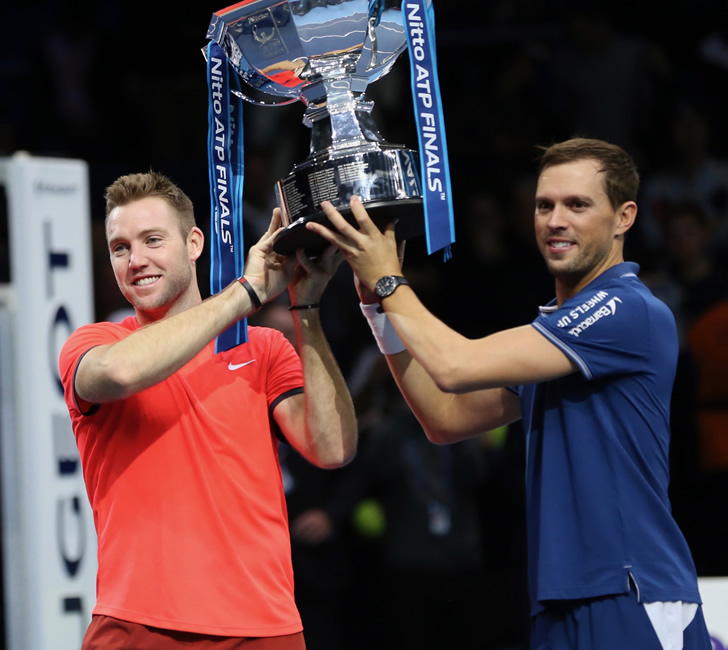 For Pierre-Hugues Herbert and Nicolas Mahut, their run to the final of the Nitto ATP Finals had already exceeded their best previous result at the tournament for the popular duo.

Following three consecutive round-robin exits, the French Open champions were into the final here for the first time—but then so were their opponents. Indeed Mike Bryan and Jack Sock had only played together for the first time five months ago at Queen’s Club after Bryan’s brother Bob required hip surgery.

It had been a success story from the start: The Americans won both Wimbledon and the US Open, and they were now after their 20th match-win in this debut appearance—and almost certainly last appearance—in London. The Bryans were on course to be reunited in 2019.

The story was remarkable for both men. Sock played here in the singles tournament last year, and reached the semi-finals. Bryan was pursuing a fifth title having won with his brother in 2003, 2004, 2009 and 2014.

The French duo had got the better of the Americans in the round robin phase, beating them convincingly, 6-2, 6-2, and it looked as though the final would follow the same pattern.

It was desperately close in the first games, with deciding points needed several times: Both pairs played aggressively and explosively, but it was Mahut and Herbert who got the first break—only to be broken straight back.

Just when it looked like a tie-break conclusion, the French worked two more break points, and Mahut directed a ball straight at Bryan at the net to convert.

Again the Americans looked to break straight back when Sock fired a bullet of a forehand return-of-serve down the line, but the French this time fought off the challenge to hold, and won the deciding point, 7-5.

Bryan and Sock hit back strongly with some great serving: They would not drop a point on first serve through the entire second set, 14/14. Thye broke Herbert’s serve for a 2-0 lead, and broke him again, via a wonderful lob, 5-1.

They held to level the match, 6-1: It would take a champions tie-break to separate them, first to 10—though it would take more than that in a thriller.

The Americans got off to a fast start, and would bring up four match points, 9-5. But rally by rally, the French edged back to level at 9-9.

The Americans got another chance, 10-9, and then all at once, it was the French who had the chance, 11-10, but they could not convert. The Americans did not need another bite of the cherry. They worked one final match point, and this time, a nervous Herbert double faulted—an unfortunate conclusion to what had been a high-quality, intense and sporting final.

So the Americans sealed a remarkable end to a remarkable season, 13-11, ending their partnership in London where they had begun it, across the capital at the Queen’s Club.

It means that Bryan and Sock have lifted three trophies in just eight events as a team, and all of them top-notch titles: Two at Majors, and now the best of the best among their ATP colleagues.

Individually, Bryan also becomes the oldest champion in tournament history, age 40, and takes his personal tally of ATP Finals titles to five. He signed the camera to ‘Mum, Dad, and Bob’—a nod to his brother, of course, and one wonders just how many more titles will come from this family.