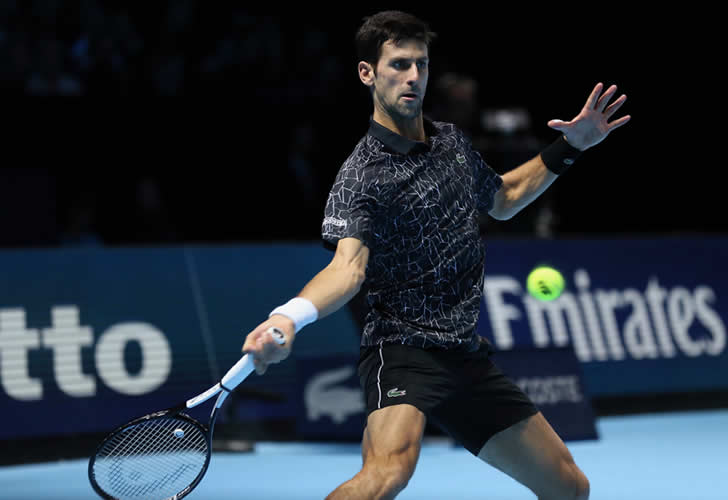 The Lleyton Hewitt group in this year’s singles showdown at the O2 was left up in the air after two complete circuits of the round-robin phase.

Even Kevin Anderson, who had notched up two impressive straight-sets wins over Kei Nishikori and Dominic Thiem was left hanging when Roger Federer saw off Thiem in efficient style. In short, any one of the four—even Thiem with two straight-set losses, had a mathematical chance of making the semi-finals.

Few anticipated such a blurred scenario after the Guga Kuerten group completed their second circuit. World No1 and top seed Novak Djokovic was looking as dominant as he had since June—32 wins from 34 matches—in beating John Isner, and was, understandably, the favourite to win his sixth title at the season’s grand finale.

He could qualify for his eighth semi-final in the tournament if he beat Alexander Zverev and if John Isner then beat Marin Cilic.

But while Djokovic was favoured to do just that, the picture when it came to the latter was less certain. There were two important factors.

For all his success in the last 18 months—two Major finals, three Masters semis, five more Masters quarters, a career-high No3—Cilic’s record at the O2 was a disappointing one. Now into his fourth ATP Finals, he had managed just one round-robin win, 1-9, and although had the initial lead against Zverev on Monday, he was edged out of both sets in a tie-breaker.

There was one more factor that could play a significant part in his meeting with Isner. His friend, Kyle Morgan, a former NFL player who had worked the American player, died unexpectedly on Monday night, and Isner posted a moving tribute on Instagram that ended: “You were a friend, the best friend I could ever ask for. Kyle Steven Morgan, I love you bro. Gone but never forgotten.”

Just what would be the impact of such a life-changing event on a man already coping with one the biggest weeks of his career, his first qualification at the ATP Finals—one of the oldest ever to do so, and after winning his first Masters and reaching his first Major semi-final at Wimbledon. It could inspire him to great feats, it could drain his spirit and make him long to be home.

But first, Djokovic aimed to hold up his end of the deal by beating Zverev, for if the youngest man in the tournament should reverse their recent Shanghai semi-final result, and Cilic beat Isner, it would be the young German who sealed his place in the semis.

In that match in Shanghai, Djokovic needed just one hour to break Zverev’s serve four times without facing a break point himself, 6-2. 6-1, and would go on to win his 32nd Masters title.

And it proved to be not a very different match, although a slightly below par Djokovic, still apparently carrying the cold virus from Paris, had to dig deep in the latter stages of the first set as a calm and confident Zverev pressed him hard in long baseline rallies.

There was not so much as a break point in the first eight games, but then Djokovic looked as though the long exchanges were taking their toll on the Serb, and he sucked in air as he faced two break points. On the second, he slowed things down, took a deep breath, bounced the ball 17 times—and 11 more on the second serve—and held, 5-4.

So drained was Djokovic that he changed shirts, sought more drinks from his team, asked the court staff for tissues, wrapped himself in towels.

Thus refreshed, he bounced some energy into his legs and Zverev gave him the opening he sought. Djokovic pounced and broke for the set, 6-4, after 48 minutes.

It seemed to knock the stuffing out of Zverev, who was broken in the fourth game of the second set, and again to love in the sixth. The young German leads the tour with 55 match-wins this year, and it began to show, as did, perhaps, that long match against Cilic. Here, he won just 11 points in a 28-minute set, leaving Djokovic to advance his cause at the O2, 6-1.

How was it, the world No1 was afterwards asked, that the older players were dominating the younger players here?

“You guys might be a little bit rough on them. I think there is a lot of quality in the new generation. Zverev is obviously the leader. He has proven himself, established himself as a top player. He has won many Masters events already, I think three in his career, which is quite impressive. You have to give him credit for that, qualifying for World Tour Finals two years in a row.

“Then you have players like [Karen] Khachanov, of course, [Stefanos] Tsitsipas, [Borna] Coric. I think tennis is in good hands. At the same time, I think us older guys, we’re still obviously working hard and working smart and trying to get the most out of what we have left in ourselves. How long that’s going to go for, we don’t know.”

The evening session, of course, features two more over-30s in Cilic and Isner, but now the criteria had shifted a little with Djokovic’s one-sided scoreline. Not just an Isner win will carry the Serb to the semi-finals but a Cilic win in three sets would do the same.

He would, Djokovic said on court, look forward to some downtime with his family until his next match on Friday, but he will surely also fit in a couple of hours’ tennis viewing to see just how that evening match pans out.