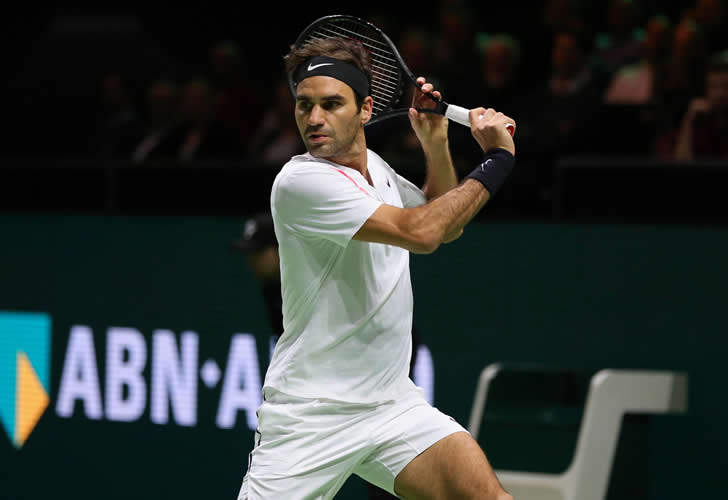 It went down almost to the wire, and in the end, the final qualifications for the Nitto ATP Finals in London were determined by a loss from one of the hopefuls.

Three of those hopefuls were in quarter-final action at the Rolex Paris Masters but there was space for only two of them.

No7, Marin Cilic, played some of his best tennis of the tournament in his attempt to replicate his Queen’s victory over the new No1, Novak Djokovic, but the Serb, a four-time champion at the Paris Masters, fought back, 4-6, 6-2, 6-3, to extend his unbeaten run to 21 matches.

All eyes then turned to No9 Kei Nishikori, who took on Roger Federer for the second time in a month. Their last was also a Masters quarter-final, in Shanghai, which Federer won in a tough two sets.

After winning his 99th title in Basel last week, it was not even certain that the Swiss would join the Paris draw, but come he did, and while his tennis was far from his best in beating No13 seed Fabio Fognini, it moved up a gear against Nishikori.

Federer won 28/29 first serves, saved the only break point he faced, and took full advantage of the fast courts to attack the front of the court with plenty of success. The victory required just one break in each set, 6-4, 6-4, and 79 minutes—which was just as well, given that the clock was approaching 11pm and his semi-final against Djokovic begins at 4.30pm Saturday.

That semi-final showdown will bring the two former champions and old rivals together for a 47th time, in a replay of their title bout at the Cincinnati Masters in August. Djokovic, who has now won 30 of his past 31 matches dating back to the start of Wimbledon, beat Federer in straight sets to complete his set of nine Masters titles. Federer will need to win this time if he is to keep alive his albeit slim chance of regaining the year-end No1, and with it his 100th title.

But the names of the night were Cilic and Thiem. For Nishikori’s loss meant that their places in London could at last be confirmed, Cilic for the fourth time, Thiem for the third.

This season, the 30-year-old Cilic won a second Fever-Tree Championships crown at Queen’s and reached his third Major final at the Australian Open. He also made the semi-finals at two Masters tournaments, Rome and Cincinnati. He rose to a career-high No3 in the rankings in January, and has won at least one title for the last 11 years.

Thiem, age 25, has recorded 50+ match wins for the second time in his career: 53-17, courtesy of three titles in Buenos Aires, Lyon, and St Petersburg. He reached his first Major final at the French Open, losing out to Rafael Nadal, and also made the final of the Madrid Masters.

These two, then, will join Nadal, though the Spaniard was forced to pull out of Paris with an abdominal injury, Djokovic, Federer, Alexander Zverev, Juan Martin del Potro—also uncertain as he recovers from a fractured patella—and the only debutant participant, Kevin Anderson.

The draw
The draw will be conducted live on The One Show (7.30pm) on BBC television on Monday, 5 November.

The group names
This year, the group names will honour players from the 2000s. In singles, Group Guga Kuerten will contain No1 seed, Djokovic, and Group Lleyton Hewitt will be topped by No2 seed Nadal (or Federer, if Nadal does not play)

The players [with age]