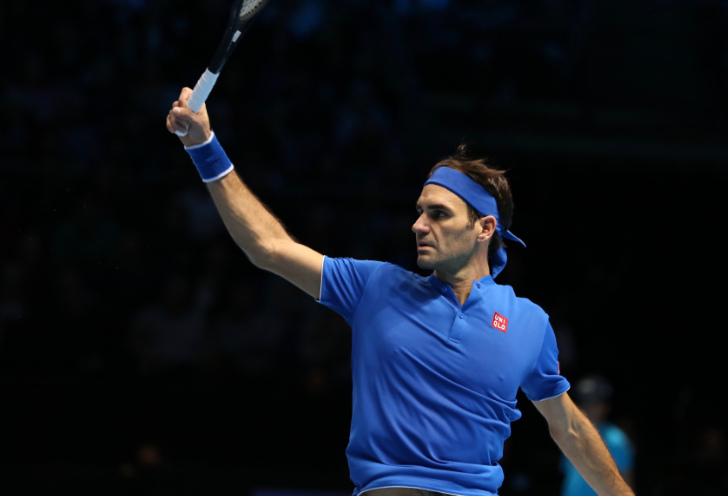 The tennis media, during this all-too-short off-season, have not been idle.

Because before you can say Merry Christmas, the men and women who compete in the most demanding of all sporting calendars are back from sun-and-sea recuperations, and back into the gym with flights booked for 2019—before 2018 has rung out the old.

Reviews of 2018, then, have to be swift—little time to ponder, little time to drift back through notes, reports, and trips to recall what seemed, at the time, special moments.

This is a slower persusal, in no particular order, of memorable matches rather than best matches, though it begins with one about which there has been little dissent.

Juan Martin del Potro’s long story of triumph and disaster—the US Open title a decade ago followed by repeated wrist surgeries and seesawing rankings—is well-rehearsed even beyond the confines of tennis. And his particular rivalry with Roger Federer came to the fore in a match that had everything in the Californian oasis of Indian Wells.

This was their 25th meeting, and the Argentine had inflicted particular pain on the Swiss in the past: It was Federer he beat in five sets to win that US title, and he beat Federer twice in finals in the Swiss star’s home arena in Basel. He exhausted Federer in the semis of the 2012 Olympics, a four-and-a-half-hour thriller, 19-17 to the Swiss in the deciding set, and he would this year deny Federer the defence of his Indian Wells title.

Both came into the contest on long, strong runs: Federer was on a 17-win start to the season, and the new No1, while del Potro sealed his 400th career match-win over Milos Raonic in the semis, extending his own unbeaten run to 10 after winning in Acapulco.

This contest had everything: superb shot-making, enough errors to keep fans on the edge of their seats—and vocal enough to prick the calm exteriors of both men. Federer saved championship point in the second set, but lost three championships points when serving for the match in the decider. His serve wavered again in the decisive tie-break, and del Potro won his first Masters—one of the biggest in tennis—6-4, 6-7(8), 7-6(2). 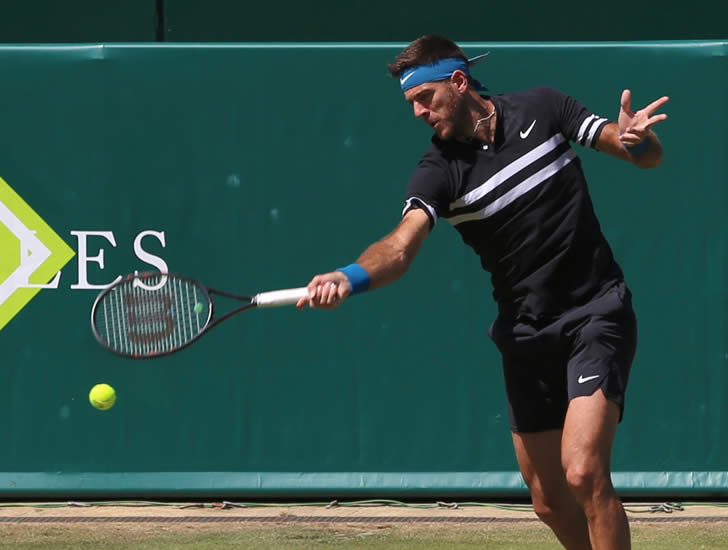 The Argentine would go on to reach the final of the US Open, a career-high No3 in August, and qualify for the World Tour Finals, only to suffer a knee injury in a fall. Federer would play just one more match until the grass season, and struggle to maintain his dominance of the first 10 weeks of 2018.

Roland Garros holds a special place in the heart of Simona Halep since winning the junior French Open title a decade ago. Paris would bring her first Major senior final in 2014, and she suffered heartbreak last year in her second, where she came within touching distance both of her first Major title and of the No1 ranking.

She would watch as rivals beat her to the top—Angelique Kerber was followed by Karolina Pliskova and Garbine Muguruza, but finally her turn came last October in Asia, and in reaching another French Open final this year, she had already assured her hold on the No1.

She had earned her latest shot at a Major title the hard way, beating No16 seed Elise Mertens, then two Major champions in Kerber and Muguruza. Now she faced a third Major champion, the reigning US Open titlist Sloane Stephens.

Stephens, ranked 10, had already won the Miami title, but had made a breakout run on clay with a pivotal win over Camila Giorgi, coming back from a set down to win 8-6 in the third. She went on to beat three seeds to reach her second Major final, and it was Stephens, with her elegant, easy power, who opened the stronger.

Stephens struck bullet-loud winners while Halep tried in vain to outwit and outrun the American. It was compelling and exhausting, and Stephens served out the set, 6-3.

Stephens continued her assault in the second, breaking immediately. Now, though, Halep’s mental toughness—and surely the experience of last year, when it was she who led by a set and a break—worked out a solution.

She looked for chances to come forward and finish at the net: It worked three times. That seemed to upset the Stephens rhythm, and Halep broke back, 2-2. Another exchange of breaks kept this one in the balance, until Halep broke again for the set, 6-4.

Halep continued to play on top of the baseline, defended superbly, and slotted winners: She was in the zone, 4-0. On the dot of two hours, she stepped up to serve for the title, hit her first ace of the match, and closed out set and match, 6-1. She had finally got her prize, and put it simply:

“I was dreaming for this moment since I started to play tennis. I’m really happy that it happened in Roland Garros in Paris, my special city.”

Then Stephens added her own memorable touch:

“No matter how hard the adversity that you go through, there is always light at the end of the tunnel, and I’m glad she finally got her light.”

These two would add another superb contest to their rivalry in the Montreal final, also won by Halep, 7-6(6), 3-6, 6-4, after two and three-quarter hours. Each afterwards admitted that the other made them play better tennis with every contest. Fans will hope for more of the same.

Federer regains No1 after more than five years

The anticipation had been climbing since Roger Federer defended his Australian Open title, and then, at short notice, took a wild card into the first ATP500 of the year in Rotterdam.

He had refused to discuss the No1 ranking until it became a realistic possibility:

“I always said I would only look at the rankings once the Australian Open was over… But I always had the flexibility in February, and I just thought I’d love to go play Rotterdam and give it a go there.”

He had come close to reaching No1 during his 2017 comeback from knee surgery, but Nadal edged him out after an equally impressive injury comeback. However, Federer’s form continued into 2018—back-to-back wins at the Hopman Cup and Australian Open.

What made Rotterdam fascinating, though, was watching a player who had ‘seen it all’ wrestle with nerves through an age-old challenge. He had only to reach the semis, and the draw turned in his favour when his scheduled quarter-final opponent, Stan Wawrinka, lost early.

Yet his second match against old friend Philipp Kohlschreiber proved tougher than expected, 7-6(8), 7-5. And the same applied against home player and old friend, Robin Haase, who had never before won a set against Federer. But now he did.

The opening set was riddled with tension on Federer’s side and nothing-to-lose tennis from Haase. In the ninth game, Haase broke and served it out, 6-4. Then the fire was suddenly ignited. Federer reeled off eight straight points, and held for 3-0. Another break for 5-1, another hold to love, and he had swept the set, 6-1. At last he began to play with freedom and confidence, and broke twice to win set and match, 6-1.

In the end, it was a masterclass, but was lifted out of the ordinary by the nerves and intensity that this perennial champion still felt. He admitted:

And, of course, it was lifted out of the ordinary by the achievement:

• more than five years since he last held the top spot—the longest gap on record;

• the longest gap between his first and most recent day as No1;

• the oldest No1, three years older than Andre Agassi, one older than Serena Williams. And all that on top of extending his own record for weeks as the top—now 310.

Naomi Osaka’s storming run up the ranks in 2018 to her first Major title will forever be linked to the then 20-year-old’s US Open final against Serena Williams.

Certainly what that final match did display was the cool-headed assuredness and power tennis of one of the most promising young players on the women’s tour. Osaka had already claimed the biggest North American title thus far, winning seven matches to claim Indian Wells, beating Simona Halep and Karolina Pliskova, and dropping just one set along the way.

Come the US Open, she would again drop only one set—but not to Williams. No, Osaka dropped her one set to another young woman with as big and bold a game as Osaka herself: Aryna Sabalenka.

At the time of their fourth-round match, both were 20 years old, both had started the year ranked around the No70 mark, and both had picked up their maiden main-tour titles in the USA. Sabalenka’s came in New Haven, and that after a semi run in Cincinnati.

This would be their first, and thus far only, meeting, and Osaka looked the more experienced player in the early stages, absorbing Sabalenka’s power, and striking back with variety and greater tactical control. The over-eager Belarusian made too many errors, and Osaka broke to take the set, 6-3.

Sabalenka hit back strongly, going for shots with more success, and broke in the third game with some bold net attacking. She broke again for the set, 6-2, offering up not a break point to Osaka, and whacking 12 winners to just seven from the Japanese player.

An early exchange of breaks preluded a tight third set in which Sabalenka’s serve increasingly let her down and errors pile up. A brutal final game ended on her 42nd error, a double fault—a weary end to a two-hour contest, 6-4.

Osaka went on to end the year at No5, but her final weeks were marred by injury, including her campaign at the WTA Finals. Sabalenka would win her second title in Wuhan, and she qualified for the WTA Elite Trophy.

By the end of 2018, though, both women had captured tennis fans’ imagination. More, please.

NOW READ: Simona Halep brings stability at the top – but challenges mount from young and old