The Scotland international has put pen paper on a new deal to secure his long-term future at the Merseyside outfit after a promising start to his Anfield career.

Liverpool FC signed Robertson in a £8m deal from Hull City in the 2017 summer transfer window after the Tigers were relegated to the Championship.

After a slow start, Robertson managed to force his way into the Liverpool FC team in December 2017 and the Scot has been a first-team regular since usurping Alberto Moreno.

The 24-year-old has developed into one of the top left-backs in the Premier League over the past 12 months or so under Jurgen Klopp’s management.

Proving that he isn’t just a one-season hit, Robertson has already contributed four assists in 20 games in the Premier League this term to lead to some claims that he is now the division’s best left-back.

Robertson posted the below photo on his Instagram page after penning his new deal.

The Liverpool FC star wrote: “One of the easiest decisions I’ve ever had to make but none the less I’m absolutely delighted to know this place will be my ‘home’ for that wee bit longer ❤ All focus on Saturday now 👀 #LFC #YNWA”

Former Liverpool FC captain Redknapp was quick to take to Instagram to congratulate Robertson on his new contract.

Redknapp posted the following comment under Robertson’s Instagram post: “Deserve everything you get. Brilliant example to every young player to never give up and what you can achieve.” 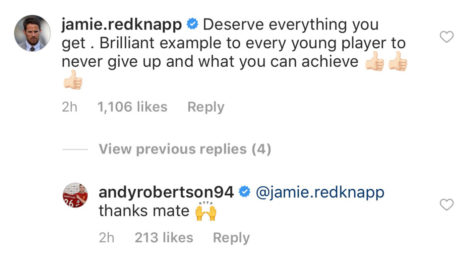 Liverpool FC are sitting at the top of the Premier League table with 15 games left to play.