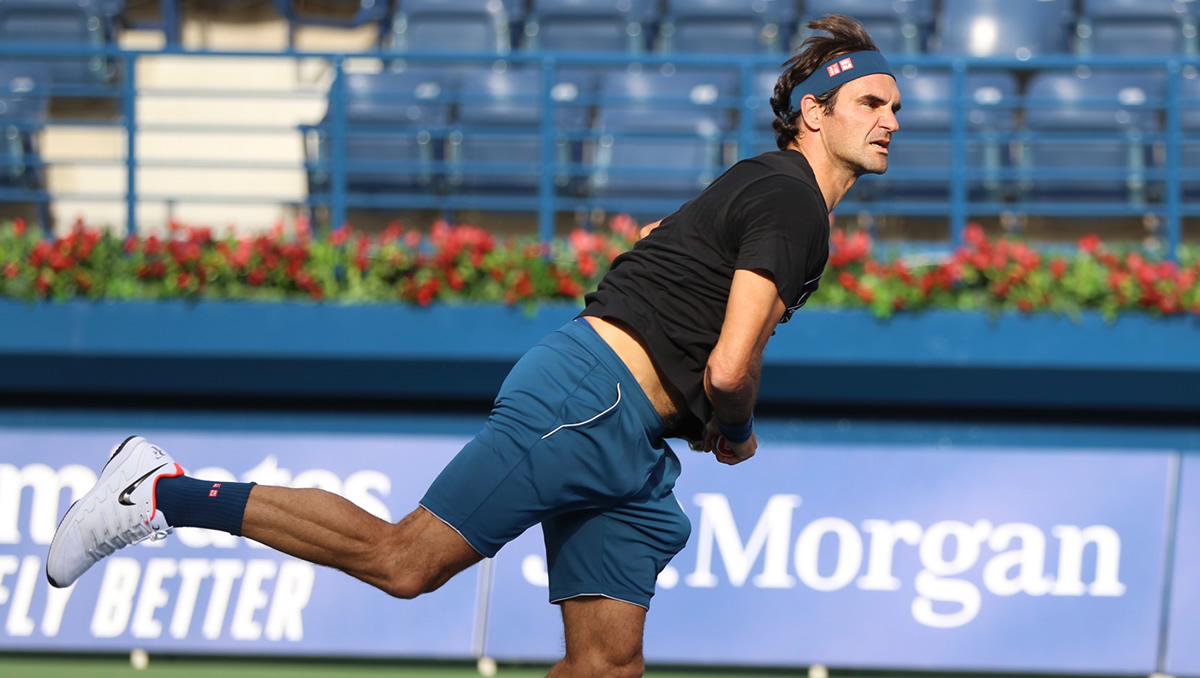 He has said it before, but Roger Federer repeated it: No8 is his lucky number—though he has said just as often that he is not at all a superstitious man. He may be born on the eighth day of the eighth month, and in ’81, but that is probably as far as this particular ‘superstition’ goes.

But make no mistake: he would dearly love to get No8 in the city that has been his second home, for that would also be his 100th career title.

When he met the Dubai Duty Free Tennis Championships Tournament Director, Salah Talak, in the tallest lounge in the world—on the 154th floor of the Burj Kahlifa—the two men reminisced about some of Federer’s iconic moments at the tournament. The first one, in 2003, he called a milestone win, where he also, incidentally, beat his now-coach Ivan Ljubicic, and then there was the famous match atop the Burj al Arab helipad against Andre Agassi.

Federer notched up his 99th title at his first home—he was born in Basel Switzerland—and fell just short with semi-final finishes at the Paris Masters and World Tour Finals.

But he takes the view: When it happens, it happens.

“I think that’s got to be the mindset, that you try your best every match, every week anyway. Things fall into place or they don’t. It’s not because of lack of effort.

“Of course, coming to Dubai where I’ve enjoyed a lot of success sort of makes you believe maybe it could happen here. Then again, the draw is tough. Haven’t played in a few weeks so you reset everything, get ready for your first round, hope everything is going to click again here in Dubai.

“It gives me confidence that I know I can play well here, on this court, in these conditions, even though I must say the conditions play much, much slower than the previous years here. This is a big shift, I believe, in the tournament. If they’re going to keep this surface this slow, or the balls that slow.”

Federer did not play here last year after he instead pursued the No1 ranking, successfully, at the indoor 500 tournament in Rotterdam. This year, he will be playing his first match since his defeat by the fast-rising star, Stefanos Tsitsipas, at the Australian Open in the fourth round.

While media activities were going on at the Dubai tournament, the 20-year-old Greek was winning his second career title in Marseille, earning a new career-high No11.

After that, he hot-foots it to Dubai, where he has been drawn into the top quarter with Kei Nishikori, so he cannot meet Federer until the final, in a draw loaded by some of the best and strongest young players around.

Before talk of a final, however, Federer plays fellow 30-something and friend, Philipp Kohlschreiber, in the first round on Monday, and by chance, they practised together a couple of days ago.

“We played two sets basically—we really both know what we’re getting into. He looks good, so it’s going to be tough.”

He failed to add not insignificant fact that he had beaten the German in all 13 of their previous meetings.

But although Federer is expected to win his opening match, he will take nothing for granted. When he last played in Dubai two years ago, he was beaten by an opponent ranked 116 in the world, Evgeny Donskoy, in the second round.

“Everybody can play tennis. We can feel in practice every single day, the moment you’re not 100 percent, the margins are so slim, you could easily lose. I think that’s why it always keeps us very humble and on the ground. That’s why this first round is a true test. I think when you come through it, it also fuels you with a lot of confidence. Yeah, I’m looking forward to it.”

And while this will be his first match in almost a month, he is not concerned about the break:

“It’s actually been a nice break away from it all. I went on vacation after the Australian Open with the family. After that, I went to practise. Important was not to get hurt because I was training in Switzerland. It was cold—we had snow and everything. I’m happy I got through that one well. Actually, I’m feeling good now. Fitness has been going well, tennis has been going well. I’ve been here a few days. I feel really well prepared.”

However, he admitted to the possibility of nerves—and just how unpredictable they can be:

“Here, playing in front of a full stadium, is something that gets you going. I love it. That’s why I’m very excited to get those nerves.”