The Swiss broke the top-10 as a teenager, had wrist surgery, now has stolen Dubai with four top-10 victories 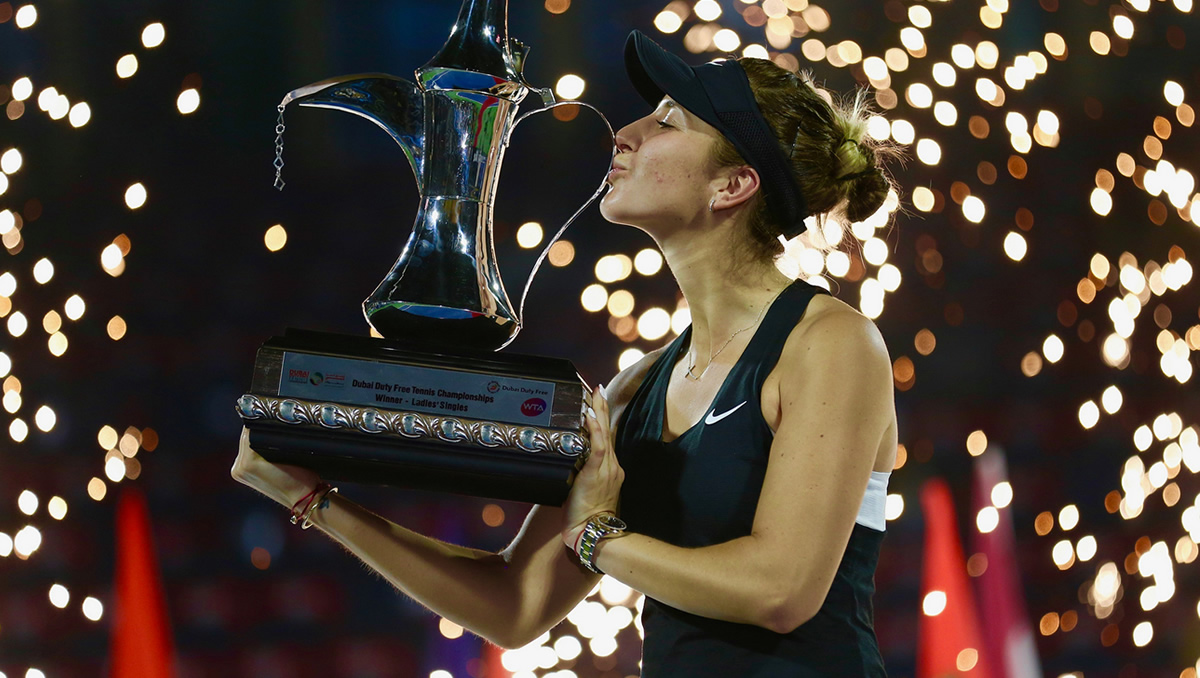 At the end of an extraordinary week of competition in the Dubai Duty Free WTA Championships, it seemed only right that the two women who had fought back from the brink more than any other in the draw should contest the final match.

And in No2 seed Petra Kvitova and the unseeded Belinda Bencic, it would have been hard to find two more popular players in the tournament.

Both had injury stories to tell, though in age, experience and achievements there were huge differences.

Kvitova, almost 29 years old, within touching distance of the No1 ranking more than once, had two Wimbledon titles to her name among 26 career titles.

But her injury back-story, what looked like a career-ending attack in her own home at the end of 2016, is a familiar one to tennis fans. Then the story of her sunny return six months later, after extensive surgery to her playing left hand, was more heart-warming and memorable than anything that had gone before.

Last year, she led the tour with five titles, and this year, she had put together the best start to the season on the WTA tour, 17-3: The title in Sydney, final at the Australian Open, quarters in St Petersburg, and now the final at the Dubai Premier 5.

But the in-form Bencic, who reached No7, made her first Major quarter-final, and won the elite-level Toronto Premier while still a teenager, had to work her way back up the ranks after back injury and then wrist surgery in 2017. From outside the top 300, she was back to 45 in the ranks, and looking fit and strong.

She was a memorable partner to Roger Federer in winning the Hopman Cup, made the semis in Hobart, and won both her Fed Cup matches before an outstanding run in Dubai. Her win over two-time and defending champion Elina Svitolina in a final-set tie-break, and from a break down in that final set, along with three-set wins over No8 seed Aryna Sabalenka—saving six match points—and No3 seed Simona Halep, was impressive indeed.

Now she could go as high as No23 with the title—but that would entail her fourth top-10 victory in a row, and her first win over Kvitova.

Indeed, the two played one another last month in Melbourne, and it was as convincing a straight-sets win as the other two victories had been for the tall, leftie power of Kvitova.

Here, though, Bencic began as cool as a cucumber, channelling her ‘Federer’ calm as she had promised:

Kvitova had admitted to being tired after her exploits this season, not just from all those matches and three-setters, but also from court hearings about her attack in 2016, and she certainly took time to warm up. Meanwhile, Bencic grabbed a quick break, held for 2-0, and almost broke again. But Kvitova staved off three break points to get on the board.

Bencic broke again, but this time, Kvitova hit straight back, yet still the young Swiss had the advantage, 5-3, and with a spectacular backhand smash, she broke once more for the set, 6-3.

But this would not be Bencic and Kvitova if it were not to go to three sets. The tall Czech upped her aggressive tennis, cut down on the errors, and ran to a 4-0 lead with two breaks of serve.

At last Bencic got on the board, 1-4, but Kvitova was in a groove, thumping angled forehands at will. Two in a row, and she broke again for the set, 6-1.

Remarkably, the stats were a near reversal of the first set, 11 winners to Kvitova for only one by Bencic, but the Czech certainly had the momentum. Could Bencic lift her game, dig in, pull the final match in her favour as she had been doing all week?

It took Kvitova to go off the boil just briefly, first a smash into the net, then a double fault, and she faced three break points. But after swiping a cross-court backhand winner, she double faulted again: Bencic took the lead.

The Swiss backhand, one of the best in the women’s game for its angle and disguise, had come to the party to force a hold, 3-1, while the Kvitova strikes began to look a little tired. All at once, she faced two more break points as her legs struggled to control a low volley. The ever faithful forehand then let her down, and Bencic broke again, 5-2.

The Swiss would face two break-back points, but with the same spirit and confidence she has shown all week, she faced them down and raised her arms in celebration of her third title, and a big one at that.

She will also get close to breaking the top 20, where she undoubtedly belongs. She is, after all, a former No1 junior. But what shone from this victory was her sense of fun, her youthful zest, a real joie de vivre.

She had, she told the crowds at the award ceremony, threatened her father that they would do a sky-dive when she next won a title—and Dubai, tomorrow morning is where it would take place.

Having admitted “This is definitely the fittest I’ve ever felt,” she went on:

It is, it transpired, something to tick off her bucket-list—and why not? She has plenty more years of the serious stuff ahead of her.