Kei Nishikori is out of the Dubai Duty Free Tennis Championships, but Gael Monfils is through to the quarter-finals 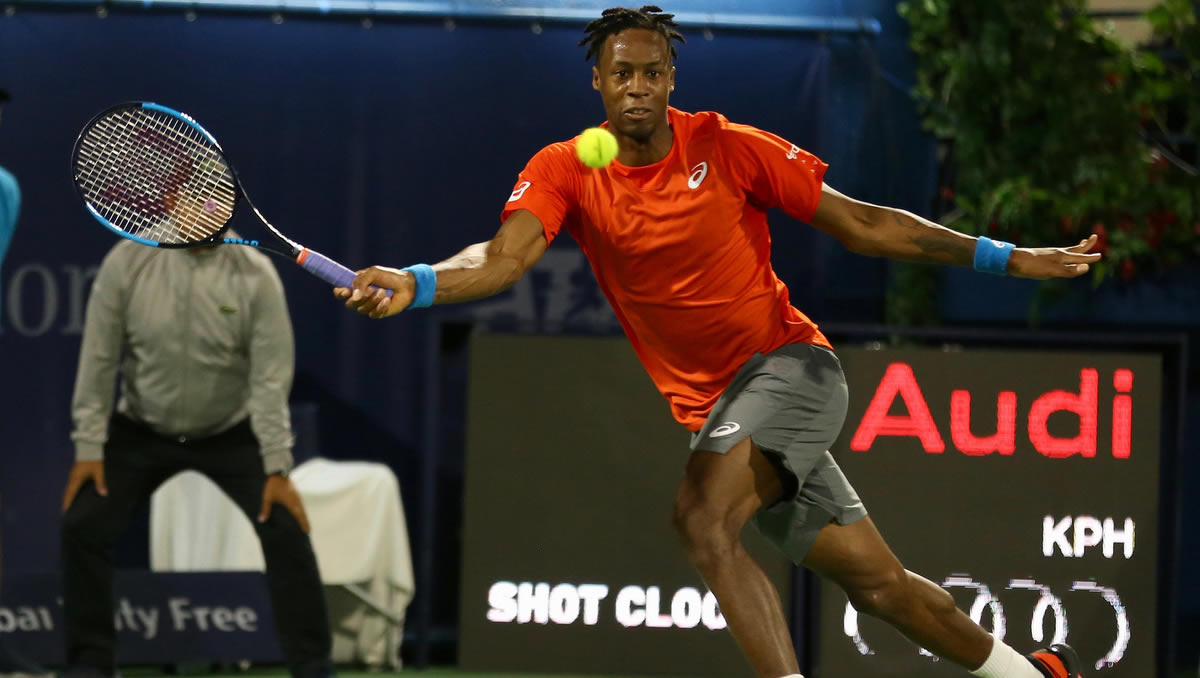 The first round was complete, but only four of the original eight seeds had survived.

But the bottom two quarters had each lost a leading man, No7 seed Milos Raonic and No4 seed Karen Khachanov, while No6 Borna Coric survived by the skin of his teeth at 10 minutes after midnight, in a 2hrs 49mins marathon three-setter.

And in the top half, the only two surviving seeds were top man Kei Nishikori, who had impressed in his opener against the dangerous Benoit Paire, and No5 Stefanos Tsitsipas, who fought through three sets within a day of flying in from his Marseille victory.

Out were Daniil Medvedev, and his victor, Ricardas Berankis, went on to clinch a quarter-final place by beating Denis Kudla for the loss of just five games. And that ensured the Lithuanian would break the top 100: Another win would take him inside the top 80.

Out, too, was No3 seed Marin Cilic—though that loss was far less of a surprise. The charismatic Gael Monfils, back to playing some his best tennis in a while, and in Dubai on the back of the title in Rotterdam, produced some spectacular tennis to beat the Croat for the fourth time—a clean sweep.

Could these two keep the seeding flag flying on another cool and breezy day in Dubai?

Nishikori, on a great run this season including the Brisbane title and a quarter-final run at the Australian Open, took on the tall Hubert Hurkacz, who, at 22 years old, was ranked 77 with two wins to his name this season. He was thus aiming to reach his first tour quarter-final and score his first top-10 win.

It would become an off-kilter match, where leads were taken and then cut back time and again. Nishikori took the first lead with a break in the ninth game, 5-4, having not dropped a point on serve thus far. But serving for the set, he was broken back, and broken again to love to concede the set, 7-5.

There were similar swings in fortune in the second set, as Nishikori bounced back to take control of the younger man’s powerful, penetrating game. He reeled off four straight games, with two breaks, and served for the set at 5-2, only for Hurkacz to mount another comeback surge. The Pole broke, and broke again to love, and they were all square 5-5.

This time, however, Nishikori stemmed the assault to break straight back and held for the set, 7-5.

Almost immediately, the Japanese man with such huge travelling support, was on the back foot again and suffered the first break, 3-1. And serving to stay in the match, Nishikori offered up one last break, 6-2, after almost two hours of unpredictable tennis, and the top seed was out of the tournament.

He cut a downcast figure when he came off court, but could not account for the seesawing fortunes.

“Well, he played good, I think. I didn’t play perfect today, but I think he was playing good serves—better than I thought. With this wind and this surface, not easy. I didn’t serve well when I wanted to. With these conditions, it’s never easy.”

He assured the media that there were no health or injury concerns, and that he would use the time before the first of the big North American Masters in Indian Wells to “find some reason why I lost today. It’s too early. I try to fix little bit. I mean, I didn’t play really bad. I just need to fix something and be ready for Indian Wells.”

For Hurkacz, of course, it was a huge step. He said:

“I was lucky to get last into the main draw. I thought I was going to play qualies, then I end up playing in main draw… Today, I mean, it’s a huge win for me because it’s the first top-10 win… I mean, it gives me huge confidence. I’m going to try to keep going forward.”

He next faces either Tsitsipas or qualifier Egor Gerasimov in the quarter-finals.

Then it was the turn of Monfils, who brought a 3-1 record against wild card and 2016 Dubai finalist Marcos Baghdatis.

The super-athletic showman Monfils, here unseeded due to a ranking hit by repeated injury problems, is a former No6, and has claimed many big scalps along the way. He also brought a winning record to the table, 3-1 against Baghdatis, whose only win came way back in 2006.

Yet the popular Cypriot took the first lead with a break in the fifth game. The glorious speed and firing power of Monfils, though, hit straight back to take four games on the bounce, and the set, 6-3.

Baghdatis almost stole an early lead in the second set, too, working a 15-40 chance against the Monfils serve in the fourth game. The Frenchman saved them, and promptly broke for a 3-2 lead, and he faced down another challenge to hold.

And that would be enough: He raced to the set, 6-2 with a final ace, and to huge cheers from the crowd. He is loved everywhere he plays, and all the more so when playing this kind of tennis—and will be favoured to beat Berankis in the quarters.

So beware the rest. Monfils is fit, content, and enjoying his tennis—just look at the way he cut through David Goffin, Medvedev and Stan Wawrinka in Rotterdam.

Footnote: Defending champion Roberto Bautista Agut fell to the No19 ranked Nikoloz Basilashvili after two and a quarter hours, 6-7(2), 6-4, 6-3, and will next play Berdych or Coric.