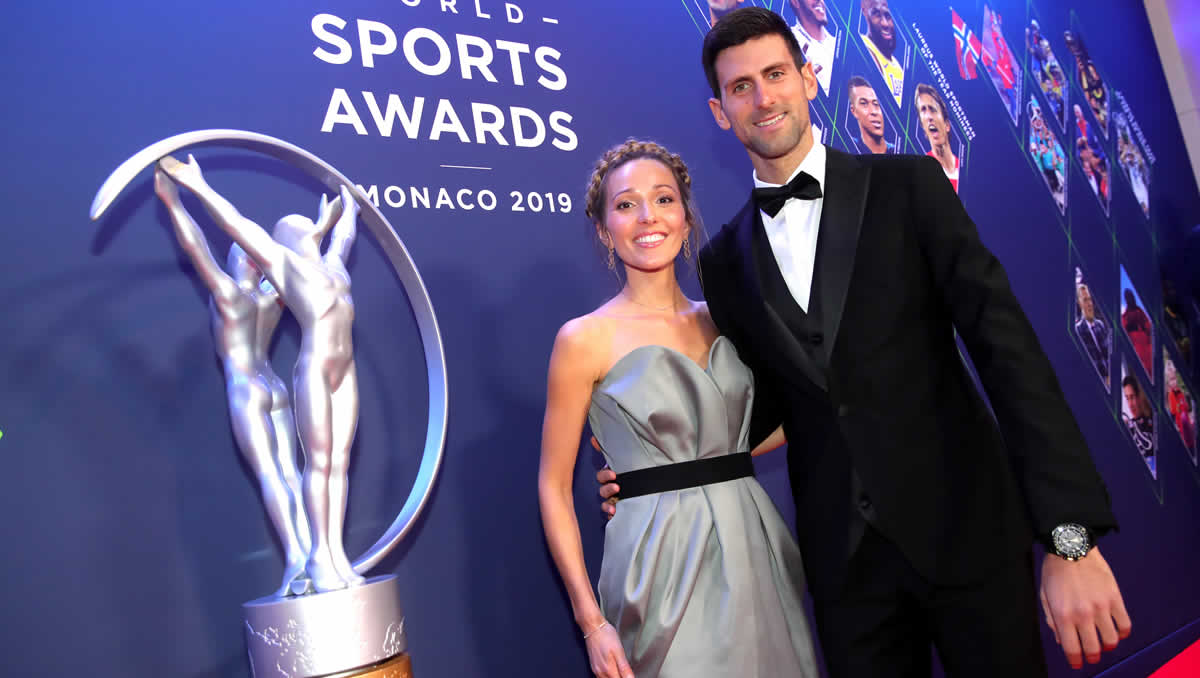 In the company of Prince Albert II in Monaco, Djokovic fought off tough competition from the likes of Eliud Kipchoge and LeBron James to win the Laureus Sportsman Award for the fourth time after winning Wimbledon, the US Open, and completing the Masters circle with the Cincinnati crown in 2018.

“A Laureus Award is what every athlete wants to win, and this one is a huge honour for me. Being among so many sporting greats tonight, and hearing about the inspirational work Laureus is doing around the world, gives this Award a special meaning for me.

“Last year was an incredible season for me, returning from injury to win Wimbledon and the US Open is something I’ll remember forever. I am delighted, and I would like to thank the Laureus Academy for their support.”

Japan’s first Major tennis champion Naomi Osaka received the Laureus Breakthrough of the Year Award for her victory at the US Open, where she defeated five-time Laureus winner Serena Williams. Osaka, 21, is now No1 in the world after also winning the Australian Open last month, and makes history as Japan’s first Laureus Award winner.

After her record-breaking performance at the gymnastics world championships, in which she won four gold, one silver and one bronze medal, Simone Biles was crowned Laureus Sportswoman of the Year. Biles, who also won the Sportswoman Award in 2017, made history last year by becoming the first woman to win four all-around world championships. At just 21, she now has a record 14 career world titles.

Golfing star Tiger Woods won his third Laureus Award, after winning the Sportsman of the Year accolade in 2000 and 2001. This time, the American received the Laureus Comeback of the Year Award for winning the Tour Championship, his first win in after more than five years, having returned to the game after spinal fusion surgery.

Chloe Kim, who at 17 became the youngest woman to win a Winter Olympics snowboarding gold medal at the Pyeongchang Winter Olympics, won the Action Sportsperson of the Year Award.

Slovak alpine skier Henrieta Farkašová and her guide Natalia Subrtova won the Sportsperson of the Year with a Disability Award after becoming the most decorated Winter Paralympian in Pyeongchang with four gold medals in vision-impaired Downhill, Giant Slalom, Super Combined and Super-G, plus silver in Slalom.

Marathon world record breaker Eliud Kipchoge won an Exceptional Achievement Award after running the fastest time ever in a marathon in Berlin with a time of 2 hours 1 min 39 seconds.

Football manager Arsene Wenger received the Laureus Lifetime Achievement Award for his contribution to football during his 22 years as manager of Arsenal. He received a guard of honour at the Ceremony from Arsenal captain Cesc Fabregas and football legends Alessandro Del Piero, Luis Figo, Fabio Capello, Didier Deschamps, Cafu and Alex Scott.

Skiing champion Lindsey Vonn’s incredible career was recognised with the Laureus Spirit of Sport Award, given to an athlete who has achieved remarkable success and displayed a relentless dedication to their sport. Vonn, who is one of only two female skiers to win four Overall World Cups and won a record eight World Cup Downhill titles, recently announced her retirement.

Chinese climber Xia Boyu received the most votes in the Laureus Sporting Moment of the Year public vote for his efforts in becoming only the second double-amputee to scale Everest, and the first to reach the summit from the Nepalese side.

Yuwa received the Laureus Sport for Good Award for their life-changing work in using football to improve the lives of young girls from disadvantaged communities. Through football, the girls overcome violence, build self-confidence, and start to change perceptions of what a girl from a rural village in India is capable of achieving.