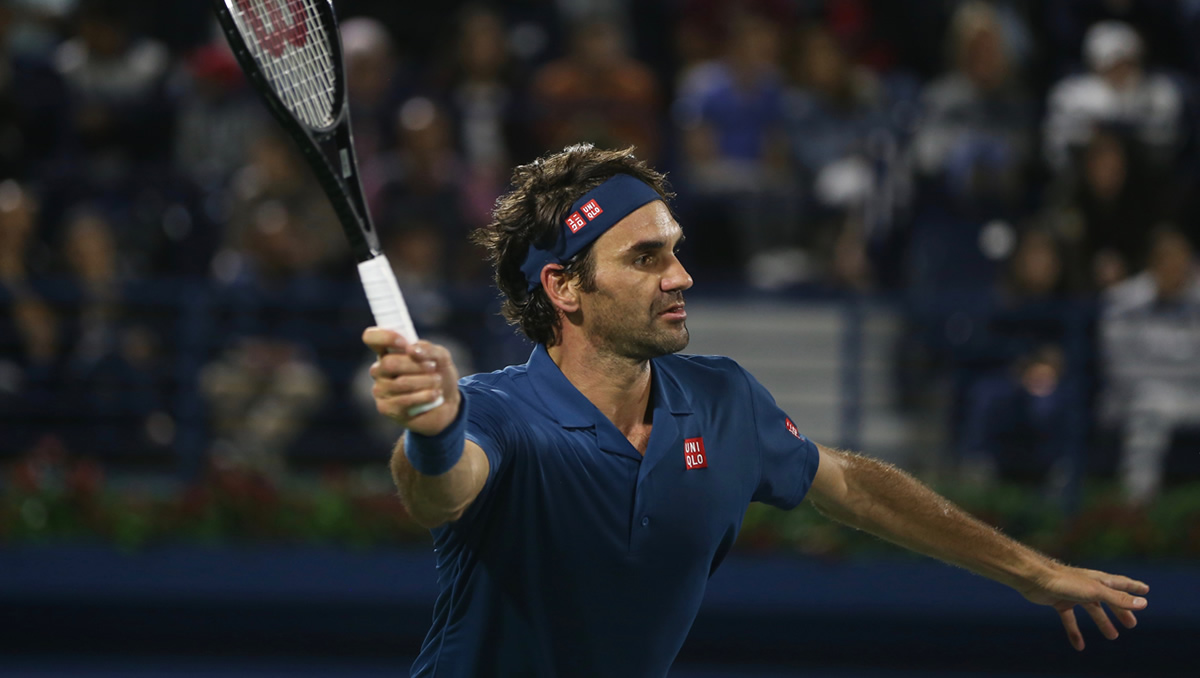 Roger Federer had a long wait to play his quarter-final match on a humid, overcast and windy day in Dubai.

The schedule began at after 3pm, and then both day matches, won eventually by Stefanos Tsitsipas and Gael Monfils, went to three long sets. Enough time for the nerves to begin to jangle, but perhaps more so for his 35-ranked opponent, Marton Fucsovics.

However, the Hungarian was not as inexperienced as his previous Dubai results might have suggested. He stood at a career-high ranking, and had come into the tournament on the back of only his second ever final, in Sofia, reached the quarters in Rotterdam, and took Novak Djokovic to three sets in Doha.

Federer, seven-time champion in Dubai, and now holder of 50 match-wins here, was under no illusions about the task ahead. After his second three-set test in a row, he said:

“I know Marton quite well actually. He came to Zurich to train with me. He was nice enough to come there… We had a great time. Then I played him at the Australian Open last year. Good match.” Federer won in three, though the second set was a tie-breaker.

“He’s improved. He likes the fast surfaces. He likes to play up in the court. He has the power when required. I think it’s going to definitely be a match to test me tomorrow.”

Dubai this year, in truth, had not seen the best of Federer yet. And he had played two very different styles of opponent: Fucsovics would be very different again. The home favourite had not really found a rhythm, and this match would not help, especially in such blustery conditions.

Sure enough, it was a slow start, errors here and there, neither serving at their best, and Federer faced a break point straight away. Tense moments, then, for a stadium packed to gunnels with Federer fans.

He came through, but made very little impact on the Fucsovics serve, even though the Hungarian was serving at below 50 percent. Level at 5-5, a few drops of rain broke proceedings, and as it lasted only around 10 minutes, Federer had to come straight onto court and serve without a warm-up. A double fault took him to 0-30, but then he swept four points, 6-5. It would head into a tie-break.

The Swiss took a small lead, 2-0, but they changed ends at 3-3, and then the big-serving Hungarian edged it to 6-4, two set points. However Federer was not done, levelled for 6-6, and hammered down a winning serve for his own set point. A rare error from Fucsovics, and the Swiss had the set, 7-6(6) after an hour of intense competition—with Federer even picking up a warning for and audible obscenity.

Federer got off to a much better start in the second set to break, and held for 2-0, but come the fourth game, four successive second serves spelled danger, and Fucsovics broke back and asserted himself with a love hold. He then had a chance to break in the eighth game, too, but three straight first serves from Federer saved the day.

The turning point came in the very next game, another interrupted by rain for almost 10 minutes, this time at deuce on the Fucsovics serve. Four times Federer worked a break point, four times Fucsovics saved them, but on the fifth, Federer had the breakthrough in the longest game of the match.

He kept the raucous Centre Court on the edge of its seat, going 0-30, before he reached match point, only to head back to deuce. But this time there was no mistake: Federer served out his 51st win at the tournament, 6-4, after almost two hours, his 11th semi-final here.

He analysed the ups and downs of a match riddled with blustery wind, light showers, and nervous fans who upped the ante on previous nights with at least three Mexican waves.

“You just go out there and try your best. Sometimes you get in the lead, sometimes you don’t. Important was not to get down in the score early on. Yeah, it was tricky. A couple of rain delays, especially one at 5-5, coming back with no preparation, just have to serve can be tricky.

“Then the same thing in the second for him also. The energy of the body, the adrenaline, tactics, all that stuff kind of fades away just a little bit in those rain delays. It’s tricky to come back and just hit winners after that. Sometimes it’s a disadvantage. Sometimes it was an advantage…”

He paused and smiled: “That was an exciting match, to say the least.”

He will next face No6 seed Borna Coric or the No19 ranked Nikoloz Basilashvili, who sits at a career high after winning his first two titles last year. A sign of his form was writ large on his wins in Dubai, No4 Karen Khachanov and then defending champion Roberto Bautista Agut.

Coric had survived two tough three-setters, both on outside courts, both late at night, and this would be another post-midnight match, albeit on Centre Court. He admitted after beating Tomas Berdych in a final-set tie-break:

“It was very, very mentally demanding obviously, both matches. I started very slow which is normal because I fell asleep at maybe 4am. That was a tough bit. But that’s tennis.

He would lose the first set, and then bounced back—his impressive fitness keeping his legs working well—to open a 5-0 gap, only for the Georgian 27-year-old to get a break back in a gruelling nine-minute seventh game.

He closed out the set, 6-2, and it went, once again, to a decider. And for the third night in a row, the resilient young Croat took it to a final tie-break—and won it, 7-6(1), in the longest of three, more than two and a half hours, and after 1am in the morning.

He is a tough cookie, Coric—and he beat Federer twice last year.

Dubai 2019: Stefanos Tsitsipas battles past Monfils in marathon effort to reach No10