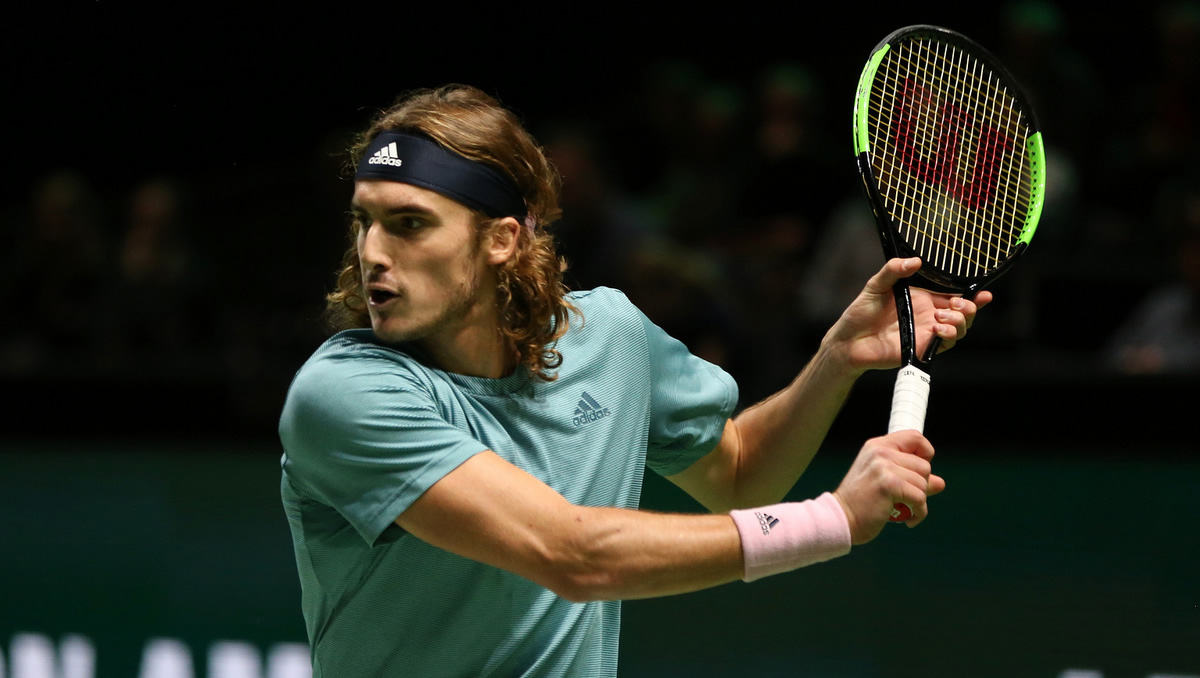 Stefanos Tsitsipas may not have been the top seed in Rotterdam this week, but there was no denying that he was one of the biggest draws, and all the more so after the likes of Alexander Zverev, Marin Cilic, Grigor Dimitrov and many more big names pulled out of the tournament.

The charismatic 20-year-old Greek caught the eye of fans long ago. It was no accident that this tournament gave him a wild card two years back Tsitsipas—here was a star in the making.

Sure enough, he was 91 by the start of last year, then beat three top-20 players on the way to the Barcelona final, reached the fourth round of Wimbledon, the semis of Washington, and made a Masters final in Toronto after beating four top-10 players, finally losing the title match again to Rafael Nadal.

By the end of the year, he had won his first title in Stockholm and won the NextGen Finals in Milan, to arrive at this year’s Australian Open ranked No15—an astonishing rise. And his profile shot up with his ranking, helped not a little by his striking looks, his explosive all-court tennis, his one-handed backhand, and his way with words on vlogs and tweets as he garnered fans the world over.

When he got to the semis in Melbourne, taking out Roger Federer in the process, his fame was assured. He may have lost in the first round of qualifying at Rotterdam last year, too, but his presence was eagerly awaited in the Dutch city.

Such has been the interest in a player tipped for still greater success in the coming years that his pre-tournament press conference was one of the best attended of the week.

He was asked to describe himself in a handful of words—not the kind of question dealt to many players. He thought, for he is always inclined to think long and hard before choosing his words, and said:

“Humble, kind I would say, optimistic, minimalist, who likes tennis and to travel and to share his life.”

Elaborating on ‘minimalist’, he added that he is satisfied with the few small things that make him happy… and not necessarily with “buying things, or having a lot of friends that you don’t actually you need.”

His philosophical bent is part of his charm, but it his racket that has done the talking, and when he took to court for his first match this week, against the 26-year-old Damir Dzumhur, a man ranked 56, standing a head shorter than Tsitsipas, and without a match-win since the Paris Masters last season, few expected anything other than a win for the Greek star.

What some may not have known was that, by chance, the Bosnian’s last match-win was over Tsitsipas, one of two wins in their three meetings. And Dzumhur showed precisely why he had enjoyed that success in the past.

He has good hands that throw in plenty of drop shots, he can slice and dice, mix things up, even if he does not have the power of many taller players. And he got the first break in the third game, before Tstisipas showed his increasing maturity and match-fitness to break straight back and hold to love.

They exchanged breaks again, with Dzumhur giving up the advantage from two loose volley errors, but he was not done.

Tsitsipas battled hard through a long ninth game, fending off break points, constantly coming to the net for some flamboyant volley work, but he offered up one more chance with a double fault, and Dzumhur would not be denied. The Bosnian broke, and served out the set, 6-4.

That seemed to galvanise the No3 seed, and Tsitsipas went on a run of five straight games, and that despite twisting his ankle during a competitive second game. Or perhaps because of the twist, for he called the trainer at deuce on the Dzumhur serve, and went on to break. The Bosnian had clearly lost his concentration.

Dzumhur did get a game on the board, but it was a lost cause as Tsitsipas served it out, 6-1, having made just two unforced errors in the set. Dzumhur had made 15.

The final set would become entirely unpredictable. First Dzumhur broke and held to lead 4-1. Again, the Greek broke back to level, and they edged onwards, but with the Bosnian keeping the pace high, stepping inside the baseline, taking chances, and earning a break point in the 10th game.

Tsitsipas resisted, and the match seemed destined for a tie-break, until the Greek made a fatal mistake, left a lob, and the ball dropped in. He faced 15-40 for more match-points, and this time he could not hold off Dzumhur, a deserved winner after almost two hours, his first victory since… well, Paris and Tsitsipas.

And he has a shot at another win in Round 2, where he takes on a man ranked only three places above himself, Mikhail Kukushkin. Indeed both seeds in this quarter have now disappeared: David Goffin lost in the first round to Gael Monfils, who went on to beat Andreas Seppi, 4-6, 6-1, 6-3.

But eyes remained on Tsitsipas for a little longer in Rotterdam, as he cut a despondent figure in the press room to try and find reasons for his unexpected loss.

Asked, what went wrong, he paused:

Was he surprised by how his opponent played?

“Not at all, that’s how he plays always, waits for you, waits for mistakes, stands eight metres behind baseline, tries to pass you, tries to play with your strength. I lost myself today, I didn’t lose to him.”

If that sounded a little ungenerous to Dzumhur, the Greek tried to explain what he meant:

“He played very simple tennis, nothing special or crazy. I mean it’s very weird playing these kind of players, because you find no rhythm… The momentum was on my side, but he was returning the ball inside the court and he was very fast and they were his strengths—hitting the ball inside and running.”

He was, in the end, correct in his appraisal, but he looked like a man in need of rest. Sure enough, he then admitted that, yes, he felt tired, and did not feel 100 percent, so he may be unable to manage his next scheduled tournament in Marseille next week.

That would, of course, be a disappointment for the French tournament, but it may be enough to restore the fire in the heart of Tsitsipas ahead of the arduous, hot hard courts that fill the next few weeks, first in Dubai, then the Indian Wells and Miami Masters.