Sakkari and Konta could meet again in Round 3 in Madrid, in section topped by former champion Simona Halep 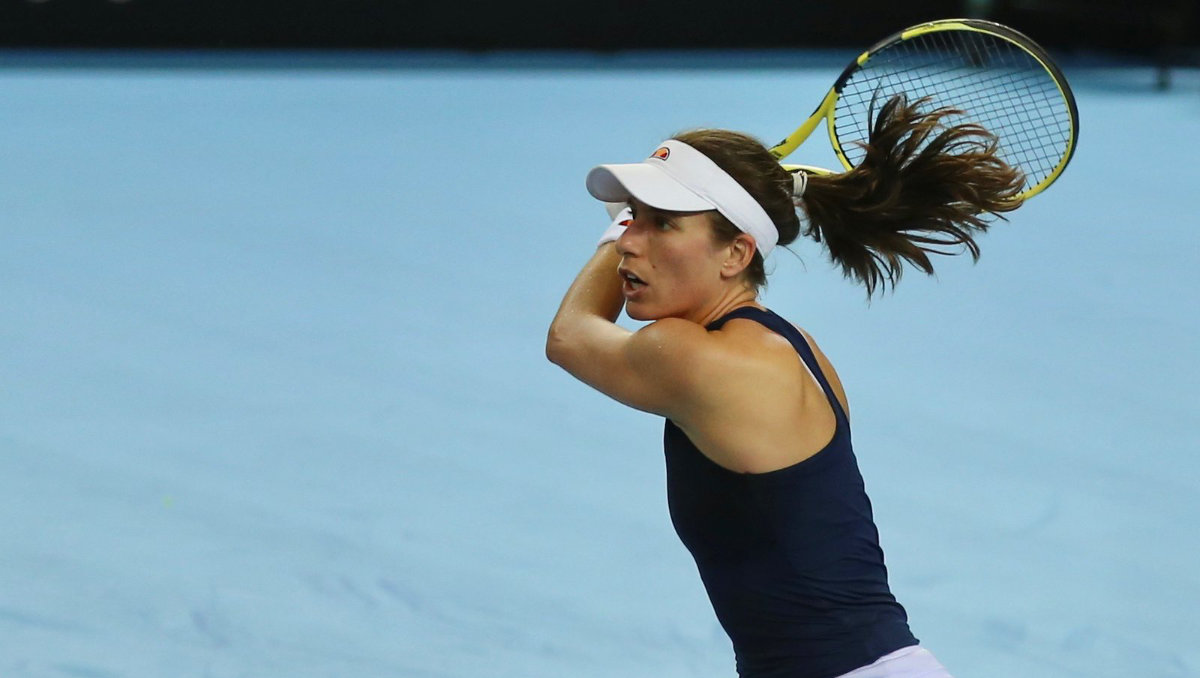 Less than a fortnight after helping GB reach World Group 2 in the Fed Cup for the first time in 26 years, Johanna Konta reached her first ever clay-court final in Morocco this weekend.

However, the International tournament in Rabat was not just Konta’s first significant clay run, it was the first time the Briton had won more than two matches in a row on the red stuff.

Take her history at the upcoming Madrid Premier Mandatory: she has won just one match in three appearances. And take her performance at the prestigious Rome Premier: twice she has reached the third round, and has scored a tally of five match-wins in her three appearances.

Perhaps more important, though, this final marked her first anywhere since she was runner-up on the grass of Nottingham last summer. For it has been a fallow period for the 27-year-old Briton after she knocked off a sequence of ‘first British woman since’ milestones in 2017, among them becoming the first British woman to reach the semis at Wimbledon in 39 years, which in turn took her to No4 in the rankings.

After that Nottingham run, Konta’s form and confidence could be measured in just eight match-wins until an upturn in fortunes at her last tournament of 2018, a semi finish in Moscow.

And this year, aside from an unbeaten record in Fed Cup, she had picked up only seven main-tour wins before hitting the clay—ranked at 47.

However, this final carried weight not only for Konta but for her opponent. The Briton played the No6 seed, Greek Maria Sakkari, who was in pursuit of her first career title after reaching her first final last summer. Sakkari went on to reach the semis in Seoul, and started 2019 with some impressive matches at the Hopman Cup, where she partnered Stefanos Tstisipas to beat both Switzerland and the USA.

The Greek 23-year-old went on to make the quarters on Charleston’s clay after playing her part in Greece’s Fed Cup Playoffs campaign, where, it so happens, she lost a vital three-setter to Konta—one of only two meetings to date. Their other was at Wimbledon 18 months ago, during that peak run by the Briton.

Since then, however, Sakkari had broken the top 100 to find herself, for this title tilt, at almost the same ranking as Konta, 51 and 47 respectively. What is more, Sakkari arrived at the final with relative ease, despite facing defending champion Elise Mertens. She did not drop a set in four matches and faced only one tie-break. In contrast, Konta had battled at every stage: three sets in her first three matches, and a second-set tie-break against No4 seed Ajla Tomljanovic in the semis.

So perhaps against expectations, Sakkari offered up an easy break after leading 40-15 in the third game, shanking a backhand to go 1-2 down. A determined hold, and Konta broke again with some really aggressive tennis and consolidated for a 4-1 lead. Her serve was finding its mark, and she had piled up a dozen winners by the time she served for the set, 6-2, in barely half an hour.

Sakkari, however, began to mix things up better in the second set, and took advantage of a slight dip in Konta’s first serve level. Even so, she could not work a break point and instead, Konta took advantage of her first to break in the fifth game, and the Briton took a 4-2 lead.

At last, Sakkari got a break chance, which was saved by a big kicker of a second serve. However, two netted backhands from the Briton finally conceded the break, 4-4.

Then Konta lost concentration to give up a 40-0 lead and faced another break point, this time a set point, and at the second time asking, Konta thumped two forehands long, and Sakkari stole the set, 6-4.

Konta had made 22 errors for seven winners in that set as her form dropped away, and Sakkari pressed her advantage home with a love hold to open the decider.

The Greek built on her momentum to break with a big forehand strike for 3-1, making a run of seven of the last eight games. She looked fresh and sharp, and was powering her forehand through the court. Konta tried a drop shot, but failed, and went 4-1 down.

The Briton was looking weary, and a couple of drop winners from Sakkari proved too much. The Greek broke again, and she would serve for the title. And with her 10th game from the last 11, she sealed the deal and fell to the court in delight, 6-1.

It had been a step and a set too far for Konta as the errors piled up to 42 by the end of the match, but much credit goes to the sprightly and spirited tennis of the Greek player. And she was generous to her opponent in receiving her trophy:

“Johanna, you are an unbelievable champion, a great player, but most importantly you are great person outside the court.”

And while the Briton will be disappointed to have fallen short of the title, her Moroccan performance will surely boost to her confidence as the three biggest tournaments of the clay season loom: Madrid, Rome, and the French Open, where, incidentally, she has never won a match. And in the short term, she will edge back towards the top 40 with plenty more points on offer before Roland Garros.

What next? The draw at the Mutua Madrid Open Premier Mandatory

Konta and Sakkari are drawn into the same eighth, so on paper, they could meet again in the third round at the Caja Magica in a few days’ time.

However first, Konta has to play the 49-ranked Alison Riske, who she beat in their only previous match, but that was on grass six years ago—and went to 7-5 in the third set. And if that was not daunting enough, the Briton could face No3 seed and two-time former champion, Simona Halep, in the second round.

Sakkari has a formidable opener against home favourite and clay expert Carla Suarez Navarro, though Sakkari did beat the 30-year-old Spaniard in their most recent meeting, at Roland Garros last year. The winner will face No16 seed Julia Goerges.

Whoever comes through this eighth could meet either No9 seed Ashleigh Barty or No6 seed Elina Svitolina in the quarters, and they sit in the half topped by Naomi Osaka.