World No3 Karolina Pliskova has won her second title at the Nature Valley International, Eastbourne 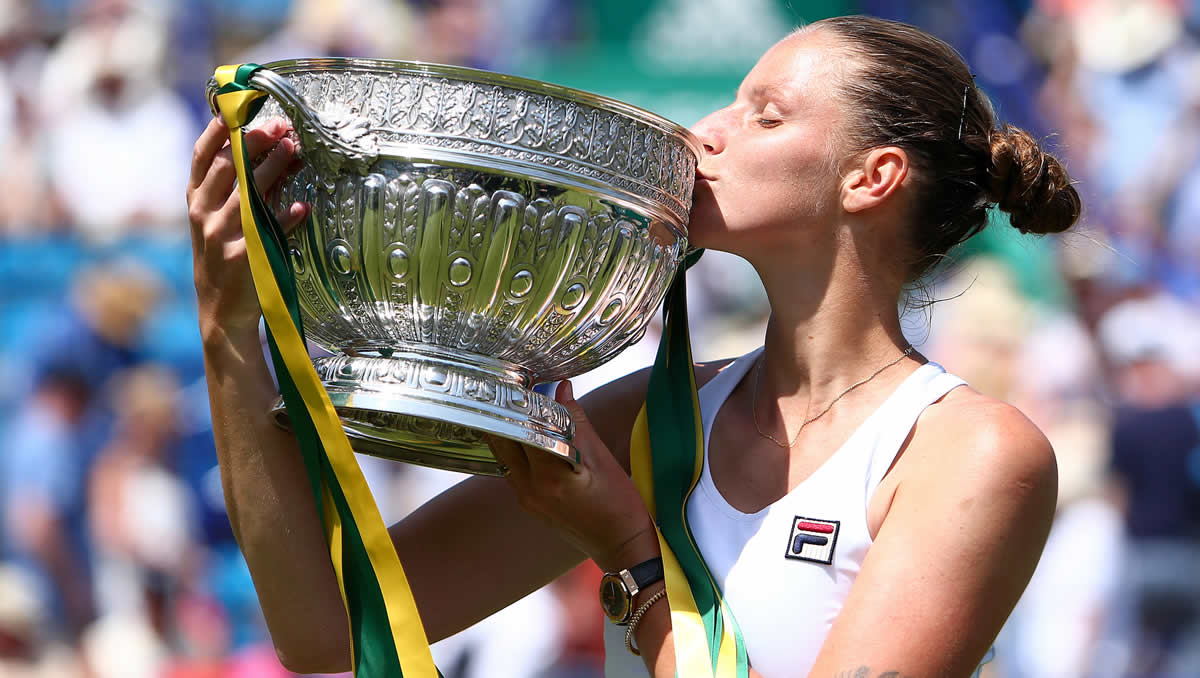 World No3 Karolina Pliskova won her second title at the Nature Valley International, Eastbourne, having also won in 2017, and asserted her claim to be one of the favourites for Wimbledon, which begins on Monday.

Displaying the confident form that carried her to straight-sets wins all week at the prestigious Premier tournament, Pliskova never looked threatened by reigning Wimbledon champion Angelique Kerber. The tall Czech broke the German’s serve three times in the opening set and once in the second set to clinch the title, 6-1, 6-4, in just 71 minutes.

She dropped serve just once, the only game she lost in the first set, and she lost only seven points on serve overall in the second set to finish with a tally of 33 winners to just 16 unforced errors.

This was Pliskova’s third title of the year, tying her with world No1 Ashleigh Barty for the most amongst singles players.

“I never had a week like this that I didn’t lose that many games. I felt like everything went quite smooth.

“All week I was playing quite perfect, but not all the matches were as easy as the score says, especially today.”

Kerber was full of praise for her opponent:

“I think she played a perfect match. I was trying to find my game but she really played well. She served good. She didn’t give me the chance to find my rhythm.”

So what of Pliskova’s Wimbledon chances? The Czech laughed:

“Of course, it’s going to be new start, new beginning. Nobody’s gonna really think about this. Maybe me!

“Maybe the second set today was the toughest, but I felt everything just went the way it should, which for sure it is not going to be like at Wimbledon… I think I did good. I was serving quite well, a lot of first serves. Especially in the second set, the percentage was high.”

As for the defending Wimbledon champion, this made three defeats for Kerber in Eastbourne finals. However, the German reached the semis or better at both grass-court events ahead of her title defence at the All-England Club. She said:

“I will try to take the positive things from the whole week, from the last two weeks, before going to Wimbledon… Of course today it was not the result that I wished, but I played against a good opponent.

“Right now, of course I will try to think about this match a little bit, what could I do better next time. But starting from tomorrow when I arrive in London, I will think about Wimbledon and not anymore about Eastbourne.”

Pliskova now has the chance to reclaim the No1 ranking that she held for two months almost exactly two years ago. She is one of three women in the Wimbledon draw, with Naomi Osaka and Petra Kvitova, who could displace Barty at the top of the ranks after the Championships. She will, though, need to target the semi-finals if she is to succeed, and thus far, Wimbledon is the only Major where she has not made at least the quarters.

That could all change this year.