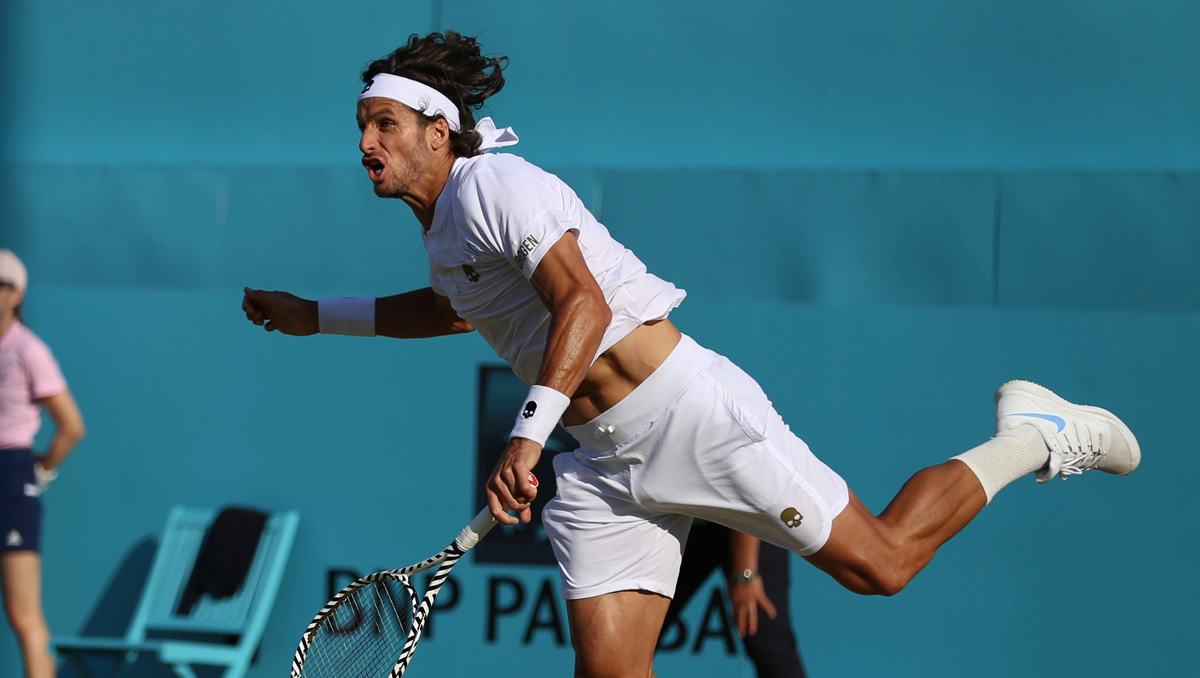 There was no getting away from it. Many had predicted a battle of the generations at the Queen’s Club in Kensington, a place that has seen many a generation come and go in its 130 or so years’ history.

This exclusive corner of London hosted the rackets sports in the 1908 London Olympics; Harold Abrams won a 100-yard dash here; and assorted rather more unlikely sports had passed through the Club’s history books—football, Australian Rules, baseball and athletics. However, its pristine lawns, regarded by many as the best in the world, continue to make it one of the most prestigious tennis venues in the world.

But the names of the four players who had made it to this sunny Saturday were perhaps not the NextGen names anticipated, nor the 30-somethings who have been here before.

No2 seed Kevin Anderson, age 33, lost in the second round, and No7 seed, 34-year-old Stan Wawrinka followed him. Instead it was 37-year-old Nicolas Mahut and 34-year-old Gilles Simon, both unseeded, who advanced, and put on a storming, three-hour 20-minute battle, the longest at the tournament since records began. Simon went into the semis here for just the second time in his career.

He would meet the 23-year-old Daniil Medvedev, seed No4, who survived a tough quarter that featured the defending champion Marin Cilic, but the 30-year-old Croat lost in Round 2, as well, and Medvedev won back-to-back matches for the first time since reaching the Barcelona final in April.

Youth certainly looked like having its day in the top half of the draw, but it would not be in the shape of top seed Stefanos Tsitsipas, who had notched up two titles this year and wins over Roger Federer and Rafael Nadal. Instead it was the teenager Felix Augur-Aliassime, seeded No8—coming from a long three-set tussle against Nick Kyrgios having beaten Grigor Dimitrov earlier in the day—who asserted his all-court credentials to beat the Greek, and make the semis in his first-ever appearance at Queen’s.

It was, indeed, proving to be a hugely impressive first main-tour season on grass: He had already reached the final in Stuttgart last week having never played or won on the surface except at junior Wimbledon.

But perhaps the biggest story of the tournament was down to who the teenager would play. For it was the 2017 champion, Feliciano Lopez, a man cut from a very different cloth in today’s game, a dedicated serve-and-volley left-hander who has played more consecutive Majors than any other man.

The Spaniard has embraced grass tennis his entire career, and at last got his reward with his biggest grass title, here two years ago after finishing runner-up in 2014.

A Major doubles champion, he had been winding down his singles competition as he took on the role of Tournament Director at his home Masters in Madrid. He had three match-wins from 11 matches this year—until Queen’s.

Once here, he scored a tough opening three-set win, then enjoyed a pass over the injured No3 seed Juan Martin del Potro, and won a final-set tie-breaker over Milos Raonic to make the semis. And all the while he was accompanying Andy Murray through the media room and on Centre Court in the Briton’s return to competition—in doubles.

First it was Medvedev and Simon, mirrors of each other in game style if not age. They played long, crisp rallies from the baseline with flat trajectories to all corners of the court—and defended with equal resilience. It made for long, probing rallies that drew ooohs of approval from the crowd, and left both men heaving for air. It took 70 minutes to complete a difficult first set, with Simon winning 48 points to Medvedev’s 47, but losing the set, 7-6(4).

The second set showed the wear and tear, with more errors and a break apiece, but Simon was beginning to look weary, and stretched out his legs, but his opponent was applying ice to his shoulder—he was feeling the pain too. And right on cue, Simon drew a couple of errors, and broke to level the match, 6-4.

Medvedev left the court for treatment, Simon followed him off, but the Russian continued to struggle, clutching his back many times, and the Frenchman took advantage. They remained locked until the eighth game, and it was the veteran who broke, and served out the win with ease, 6-3 after two hours 38 minutes—to reach an astonishing 10 and a half hours on court.

Through weary smiles, Simon admitted it had been very tough:

“It was hard to recover for this one. Tough, tough until the end, long rallies. We often practise with Daniil, we know it’s going to be long. He controls the ball so well, controls the game also, keeps the ball low, so it’s hard to go for the shots—and it’s my game also. So you have to see long rallies when you play together.

“It’s hard for me to hit through him. He has the same problem… but I was hitting the ball great today, and when you are really tired in a long match, you also relax a bit, and the feeling is great, even if it is not great in the legs. I saved quite a few important points playing amazing rallies and I am really happy about the performance today.”

If he wins one more match, it will mark his first ever grass title, and make him the only Frenchman ever to win at Queen’s. But what of the match that boasted with the largest age differential in a semi or a final since 1977?

Well there was nothing between them for the first hour of the match, with just a couple of break chances on either side saved by great serving. They headed to a tie-break, and there, youth had its day, as Auger-Aliassime got the first advantage, 43, and took the set, 7-6(3), with Lopez falling heavily in the process.

The Canadian had made 21 winners to 10 from Lopez, and just 13 errors, and looked set to storm to the win. But Lopez had other ideas, saved break points in the first game of the second set, broke the teenager for the first time in the tournament, and held for 3-0. He served it out, 6-3, this time with the teenager falling to the court.

And come the decider, it was again Auger-Aliassime who was broken first. He saved four match points at 3-5, but Lopez’s serving hit the heights in the last game to serve out the match, 6-4, after more than two and a quarter hours.

He is now into his first final since winning here in 2017, the oldest finalist at Queen’s in the Open era. And he laughed at Simon’s comment that it would an over-35s final:

“Yeah, it’s crazy how the old guys can perform well. It’s pretty amazing, I feel very lucky to still be competitive at this stage of my career. I would never imagine I could reach the final of Queen’s at the age of 37. It’s a reason to be happy.”

Of course, he was not done for the day: He and Murray had to complete a quarter-final doubles match. He told the crowd: “Keep your seats, I’m coming back in 10 minutes!”

And he was, and he and Murray raced to the semis in just 16 minutes, 6-4, 7-6(3). Yet still he did not leave court: They simply waited for Henri Kontinen and John Peers to join them.

You can’t keep an old dog down, it seems.

Halle 2019: Roger Federer makes it a record 10 with victory over Goffin