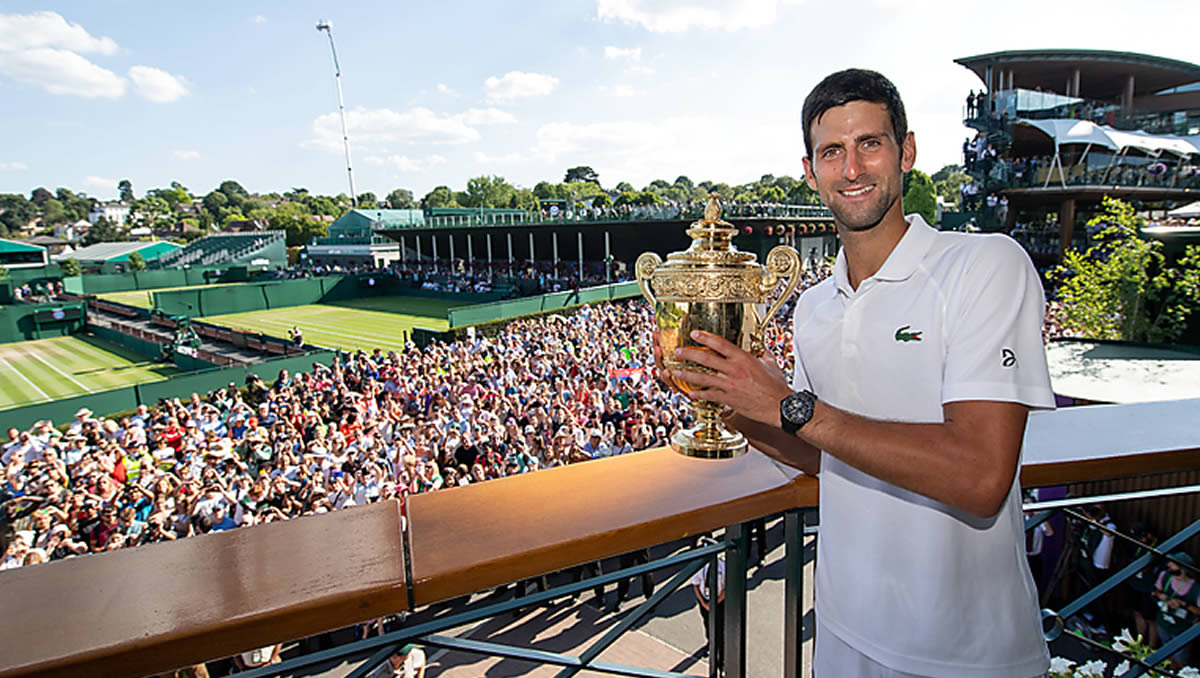 The last final at Wimbledon between two of The Big Three men in modern tennis, Roger Federer, Novak Djokovic, and Rafael Nadal, was back in 2015.

And considering this triumvirate has won every men’s title in SW19 since 2002—aside, of course, from the temporarily absent Andy Murray—this year’s final had just a little extra ‘edge’.

For it reunited the top two seeds, Djokovic and Federer, and that after the Swiss had already met and beaten the third, Nadal, in the semis.

Read Novak Djokovic, Roger Federer—a rivalry in words and figures for more on this iconic rivalry

It marked only their third meeting at The Championships, and their second successive final, both of which Djokovic had won.

Since then, they have met seven times, and the Serb has continued to have the upper hand, winning their last four matches and taking their extraordinary rivalry to 25-22 in his favour.

Between them, they had now won a dozen times at Wimbledon—Federer went on to win his eighth in 2017 and Djokovic his fourth last year. And the Serb was, again, the favourite to win—he stood head and shoulders above the rest in the rankings and had won three of the last four Majors.

He had also been able to conserve his energy rather more than the Swiss, not facing a top-20 player, while Federer had faced all of his scheduled seeds, including No17 Matteo Berrettini, No8 Kei Nishikori, and No3 Nadal.

Of course for the Swiss, who turns 38 in just three weeks’ time, the chances to avenge those two final defeats at the tournament and on the surface that he loves more than any other, grow fewer with each passing year. And he expended a lot of emotional as well as physical resources in beating the man with whom his name is indelibly tied, Nadal. His first words coming from court?

Not surprising: Federer plays aggressively and explosively, and especially so to beat Nadal. In that semi-final alone, he attacked the net 33 times, made 51 winners for only 27 errors, missed match points on the Nadal serve in the fourth set, and faced break point and several deuces when serving for the match in a cauldron of tension.

Afterwards, and more composed, he was able to contemplate the final challenge:

“[Djokovic] played great against Bautista Agut. Novak was supreme. He is the defending champion and has showed why. He has been rock-solid… I hope I can push him to the brink and hopefully beat him, but it’s going to be very difficult.

“At the end of the day it comes very much down to who’s better on the day, who’s in a better mental place, who’s got more energy left, who’s tougher when it really comes to the crunch. In tennis, there’s always somebody who’s going to be a little bit better because there’s no draws in our sport. It’s always quite brutal.”

Brutal is the right word. Take the 2014 final, four hours, five sets, 366 points, but only one name on the gold trophy.

Take their most recent match, last October in the Paris Masters: More than three hours for three sets, 252 points, another win edged by Djokovic. Such was the quality and closeness of that contest, it was named the ATP’s Match of 2018.

And make no mistake, between these two, the score-lines have often been achingly close, the prizes at stake high, the disappointments palpable. Certainly the noise of anticipation on Centre Court made it abundantly clear that almost everyone at Wimbledon knew the intensity and the moment of this match within this rivalry.

The first set was a microcosm of all those tight contests. There was little between the two men, as first Federer and then Djokovic edged the points tally. The Swiss had a chance in a fourth long game, with a break point among a slew of deuces, and Djokovic had a look at Federer’s game in the fifth, 30-0, until the Swiss reeled off five points.

At 4-4, they had 25 points each, and while a forehand drop winner from Federer gave him a slim opening at 5-4, three winning serves from Djokovic snuffed it out. Each showed a hint of nerves as they edged to the tie-break, a deuce game courtesy of a double fault, but it would come down that ‘brutal’ 13th game, with just one point separating them.

Federer then kept finding himself in long baseline exchanges that were certainly not his ideal tactics against the master of such tennis. The Swiss was run ragged, hit a backhand long, 1-3, only to take back the lead with a forehand winner.

But there was the hint of the momentum shift towards the Serb as he edged to 42 points to 37, and sure enough, he grabbed four points in a row to take the set in just under an hour, 7-6(5).

Against another player, Federer’s 21 winners to 14 errors might have been enough, but not against Djokovic. However, the momentum swung violently the other way: Djokovic slipped awkwardly, Federer broke, and then broke again. The Swiss held with an ace for 5-1, and with the Djokovic focus evaporated, Federer broke again after pulling off a gasp-inducing angled volley, 6-1.

Djokovic left court, gathering his thoughts, while Federer ambled around the baseline waiting to serve, and on resumption, the Swiss kept control as Djokovic continued to leak errors. But as the set wore on and the rallies lengthened, the Serb looked more comfortable.

However the variety of Federer worked a break chance for the set, only for Djokovic to serve with superb precision again, then produce a body serve to hold: it went to another tiebreak. And it would be a near duplicate of the first, with Federer suddenly tighter and Djokovic focused. The Swiss was not getting to the net enough, and from the baseline, the Serb was flawless: He took the set, 7-6(4).

Surely that would knock the stuffing out of the older man, especially with Djokovic now serving first. But no, Federer went on the offensive again, broke in the fifth game and held to love. And rather as before, Djokovic seemed briefly blown out of his comfort zone and suffered another break. This time, however, he piled on the pressure and got one break back: Would Federer waver again? At the second time of asking, the Swiss served out to love, 6-4.

With three hours exactly on the clock, this would go all the way, with the crowd growing more vocal with every rally. It grew into roars and chants as they tried to lift Federer through break points in the fourth game, and he survived. But perhaps with less spring in his legs at last, he began missing first serves, made two backhand errors, and conceded the break in the sixth courtesy of a forehand pass by Djokovic.

But just when it looked over, Federer dug in again, began to drop shot, broke back, and aced twice to hold, 4-4. And so it went, with waves of outstanding rallies, punctuated by explosive net attacks by Federer, and extraordinary defence-turned-attack from the baseline by Djokovic.

Then all at once, the court exploded as Federer pulled off a forehand pass on break point to serve for the match, 8-7. He aced twice, and brought up two match points.

He had been here before against Djokovic, at the US Open, and had been reeled in and beaten. Perhaps that made Federer to tentative on serve, and sure enough, Djokovic pounced, nothing to lose, levelled, and held to regain the lead, 9-8.

With the new tie-break rule in place at Wimbledon this year, at 12-12 in the final set, this looked like becoming the first singles match to use it, though Federer had other ideas. He attacked the net on the Djokovic serve repeatedly at 11-11, worked two break chances, but once again the Djokovic serve, one of the most improved shots in his artillery, saved the day.

Going into this tie-break, Federer made a statement hold, three serve-and-volley winners and an ace, but it made no difference come the most brutal part of any match, and all-or-nothing tie-break to determine the winner of gold, the loser of silver.

And it unfurled just as the previous two tie-breaks had, Federer losing a couple of points too early, one to a rash volley, and his sliced backhand was now proving a gift to Djokovic, who sailed to victory, 13-12(3), after five tumultuous hours.

Is there a worse way to miss out on the most coveted title in tennis? Probably not, and all the more so when the loser ends up with 14 more points—just not the final points.

Federer was asked for his thoughts on a match that will be remembered by many for a very long time. He turned it around: “I will try to forget.”

But he found a smile, conceded it was a great match full of great tennis, but that his children would not be pleased he was taking home ‘the plate, not the golden thing’.

He also hoped, he said, that he may inspire others to try to achieve at the age of 37. But the day and the plaudits belonged to the 32-year-old Serb, the world No1, now the five-time Wimbledon champion, a 16-time Major champion.

He said of the match:

“I think this was, if not the most exciting and thrilling final I’ve been a part of, then definitely in the top two or three of my career—and against one of the greatest of all time in Roger who I respect a lot.

“Unfortunately, in these matches one player has to lose. Both of us had our chances. It was quite unreal to have match points against me and come back and then to have a tie-break at 12-12. I was actually hoping I could get to a tie-break!

“Roger said he hopes he give people the chance to believe at 37 years old, and I hope that I am one of them. He inspires me, that’s for sure.”

Yes, in tennis there are no draws; one lifts the beautiful golden cup while the other leaves with ‘the plate’.

Brutal and inspiring in equal measure.

Dog days of summer: Tennis heads back to hot, hard times – with kink in the road to clay