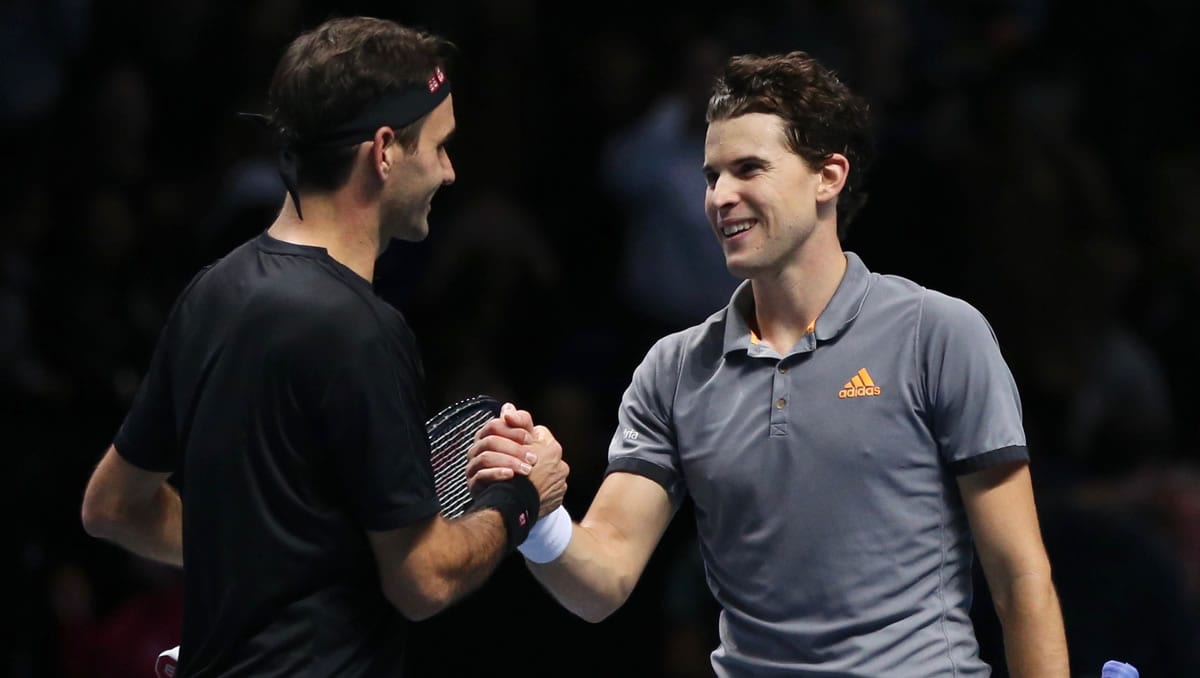 It was certainly a tough opener for both men, No3 seed Roger Federer and No5 Dominic Thiem.

Federer, 12 years the senior of the two, held all the tournament records: six titles, 10 finals, 17 qualifications, 57 match-wins. He also held all the indoor records: 26 titles, 296 match-wins, and an 81 percent success rate.

But 26-year-old Thiem was one of a rare band of players to have played Federer at least half a dozen times and he held a winning head-to-head, 4-2.

The young Austrian had beaten the Swiss on all three surfaces, though not indoors, and had also beaten him in their last two meetings, in the Indian Wells final and the Madrid quarter-final, on both occasions coming back from a set down.

And like Djokovic, Thiem had five titles to his name this year, plus a second runner-up finish at the French Open. Not that Federer had got to London again by sitting back and admiring his past records. He had won four titles, also including a Masters, and also made a Major final run, at Wimbledon.

Last year, too, Federer did win their only previous match at the O2, and in straightforward style. Indeed, Thiem had yet to get beyond the round-robin stage in three previous visits. But had the balance of power since shifted? What did Thiem think of his chances this time, under the successful tutelage of the coach who came on board ahead of that Indian Wells victory, Nicolas Massu?

“Of course, that’s my big goal [to get to the semis]. The first two years it was just so nice to be here, and last year I wanted to be in the semi-finals badly, but I didn’t play that well.

“I think I’m playing way better this year, but the level is so high, it’s the eight best guys of the season, so it can also happen that I play three very good matches and I lose three of them. There is no guarantee, but I’ll try my best and hopefully I can make it to the semis for the first time.”

And the confidence and attack that Thiem has increasingly shown this year was on full show from the outset, an immediate break, and a hold for 2-0.

Not so fast, said Federer, who turned around a sluggish serving start with a hold to love and then a break back to level 2-2. And so they stayed, locked in a fast-paced cat and mouse contest, now one racing to the net and getting passed, now the other suffering the same fate.

There was barely another point lost on serve until 5-5, and Thiem broke again, playing Federer almost at his own game—with aggression, variety and intensity—and held for the set, 7-5.

Federer, on statistics alone, had played the better set: more winners, fewer errors, better serving percentage. But it is a fact oft quoted in tennis. It is not how many points you win, but which ones, and Thiem was aggressive and clutch at the key moments.

The second set began more strongly for Federer, opening serve, earning break points to go 3-1, but unable to convert. The Swiss then had to work hard to hold off a break in seventh game, not helped by a wayward smash into the net. But he survived, only to face deuce again in the ninth game.

Once again, Federer survived the test, but he could not break through an ever more consistent Thiem serve. It was 5-5, and just as in the first set, Thiem pounced, broke to love, and served again at 6-5.

This time, Federer had the crowd roaring him on to greater effort as he worked one break back point, and then another, but he berated himself for missing his chance, unable to make any headway on his return. Thiem was not for turning: he held for 7-5 and his third victory of the year over the man he grew up idolising.

Federer’s usually strong net game was not as sharp as it might have been, just 12 made from 22. But he credited Thiem for playing such a strong match:

“I thought he played well. mean, the start definitely didn’t help. That put me on the back foot a little bit. But I recovered well, and I thought after that, the match was actually pretty even for a long period of time. Had my chances, I felt. Didn’t feel like I was outplayed or anything. Just maybe that first-round hiccups a little bit, not hitting your spots on the serve when you need to, getting into trouble early in the service games, which maybe doesn’t happen later on in the tournament.

“I thought also Dominic saved himself real well when he had to, so I thought he played a tough first-round performance today, and my game was probably just not good enough.”

Federer will next play the lowest ranked man in this group, Matteo Berrettini, who managed to win just three games against Novak Djokovic earlier in the day. The Italian only scored five games in his only meeting with Federer, at this year’s Wimbledon, so the Swiss may be able to recoup some lost ground.

If he does not, he could find himself out of the tournament at the round robin stage for only the second time, and the first was when suffering from chronic back pain in Shanghai in 2008.

For Federer must regroup quickly, sharpen up, and prepare for the big-hitting Berrettini—and then another man to have scored heavily against him of late, Novak Djokovic.

At least, he may say, he is still in the contest.

‘They are truly a mess’: Pundit hits out at Man United under Solskjaer