Tsitsipas: “Playing him, it’s the biggest honour I could have. Today’s win one of my best matches of this season.” 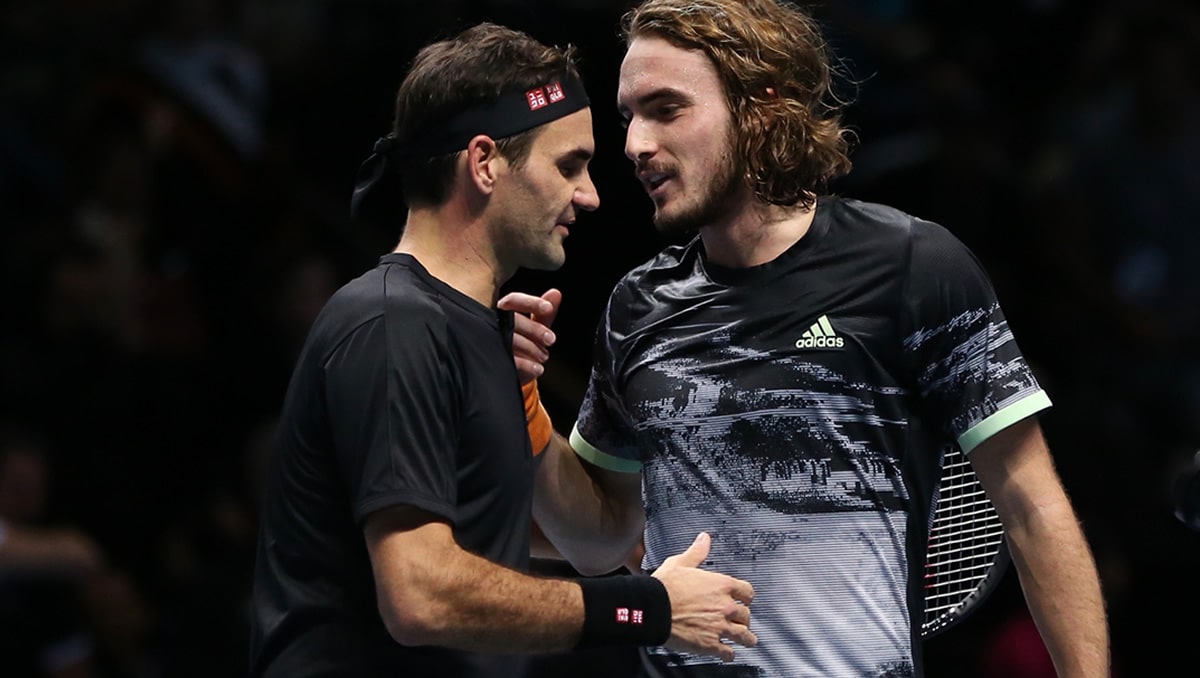 They just keep getting younger, the men who Roger Federer finds himself facing at the highest level on the tennis tour.

And the stakes do not get any higher on ATP tour than at the season finale at London’s O2, where only the elite eight players qualify for this prestigious title, big points and substantial dollars.

The mighty Swiss first qualified in 2002, at the age of 21. Seventeen years later, and he is still here, where he has been every year aside from 2016 when he had knee surgery.

Last year, he played a 21-year-old in the semis, Alexander Zverev: the young German beat him and went on to claim the title with victory over Novak Djokovic. That set the biggest age differential in the tournament’s history, little short of 16 years.

This year, Federer again plays a 21-year-old, Stefanos Tsitsipas, and sets another record; He is 17 years older than the Greek—almost old enough, indeed, to be his father.

But of course, Federer is not just challenging age-related records. His 17 appearances in the tournament is a record. His 16th semi-final is a record. He has reached more finals than anyone else, 10 of them, and has won more titles, six, via more match-wins 59, than all-comers.

He was asked how he manages to still play like a man younger than his years. He smiled:

If anything, the closely-cropped hair he now favours adds years to his face, which is more angular and lean than the youthful face with the pony tail who made the semis back in 2002.

He still sports a signature bandana—though less often in practice—but the vast, shapeless shirts are long gone. Lucrative deals with clothing companies have tailored the look, slimmed down the outline, and created an image more in line with his mature years.

Yet his continued athleticism is not in doubt: He has moved the goalposts for those with whom he plays and those who follow. Djokovic admitted with a smile after his loss here on Thursday: “Well, it motivates me. I mean, it shows me it’s possible.”

However, there is no getting away from the fact that a younger, taller, eager generation of young players is on the march. Four of the eight in the tournament this year are 23 and under, and two of whom have won multiple Masters titles.

As for Federer’s imminent opponent, the charismatic Greek exudes confidence in an explosive game that carries echoes of Federer—the one-handed backhand, and an eagerness to play forward-moving tennis. He also happens to keep his long hair in place with a bandana—just like Zverev. It is no accident that both young men grew up idolising Federer.

For Tsitsipas, it has proved to be a successful model. As well as beating Federer at the Australian Open this year, he has beaten Rafael Nadal on his way to the Madrid Masters final and Djokovic as he headed to the Shanghai Masters semis.

Federer had gained a measure of revenge against Tsitsipas in Dubai and Basel, and if the Swiss could replicate the kind of tennis he produced against Djokovic here, he was favoured to win again. But things are changing fast in tennis, and the Greek is a model pupil who listens and learns and applies at a fast pace.

And young gun Tsitsipas went off like a bullet after saving break point in a testing first game. That done, he broke Federer, and although the Swiss looked relatively comfortable on serve for the rest of the set—though not at the level he had produced against Djokovic—he could not level despite being offered up 0-40 in the seventh game.

Tsitsipas was clutch, and held for 5-2, serving and defending well, taking the ball early at every opportunity, but what also brought him through to seal the set was sheer doggedness.

Federer pressed, and pressed again, in a 13-minute game, as six set points came and went. Twice more Federer had break points, twice more he failed to take advantage, though he worked hard through eight deuces. But Tsitsipas survived, 6-3.

The second set’s score would similarly not reflect how tightly fought it was, and how quickly it could have pivoted.

Federer opened with a love hold, but was then broken to love in the third, missing every first serve. The Swiss roared himself to greater effort, and while it took four attempts, he finally got a break against his young opponent. The arena erupted, and the chants of ‘Roger Roger’ echoed to the roof.

But it was short-lived, as his first serve deserted him again. He would land little more than 50 percent of first deliveries in the set, and he was suitably punished. Another break, and he was 2-3 down again.

Even to the last, the Swiss managed to work some chances to level, two more break points in the very last game. But his level was simply not there, while Tsitsipas looked every inch the finalist he would soon become, 6-4, after an hour and 36 minutes.

One big statistic stood out in the final analysis: Not winners, Federer had three more than Tsitsipas; not errors, there were just five between them. But on break points, in a chilling replay of Federer’s Australian Open defeat, he converted just one from 12.

“Had some good spells, but the spells where things were not working well, they were pretty bad. At this level, you just can’t have it happen, so that was pretty disappointing… But again, I look across the net, and I thought that he played really well. I have to credit him for pushing me to not playing at the level I was hoping to today.”

Tsitsipas, for all that he beat the fans’ favourite, has won many hearts this year in his first visit to the O2, and may well be the favourite come the final against either Dominic Thiem or Zverev. He has charm in buckets, and an exuberant way of expressing himself:

“Wow! Jesus. I’m so proud of myself today. Great performance and once again, people were great. I really enjoyed my time on the court and sometimes matches like this, you wonder yourself how you overcome all those difficulties, all those break points down. It’s really, like, a mental struggle.

“Playing him, it’s the biggest honour I could have. Today’s victory is probably one of my best matches of this season.”

It will perhaps be one of Federer’s great legacies, when he hangs up that racket, that he has inspired a swathe of young, impressive athletes to follow his example. Tsitsipas put it thus:

“I grew up watching Roger as a kid. Watching him here at the Finals, watching him at Wimbledon, plenty of finals. Wished I could step out on the court one day and face him. Today I’m here and living the dream. I remember myself being one of these kids here watching the event. I could never picture myself standing here but it did happen. Dreams do come true.”

Not that Federer seems ready to leave the court just yet. After all, if he makes it back here for the last playing of the ATP Finals at the O2, he could notch up that 60th match-win. He concluded:

“I’ve got to keep on playing at the level I have this year, and then I will create some chances. I thought I played some consistent, solid tennis. Got to take care of my body, listen to the signs, work well with the team, get the balance right with everything that’s happening in my life… But, you know, I’m happy how I played this season, and I’m extremely excited for next season.”