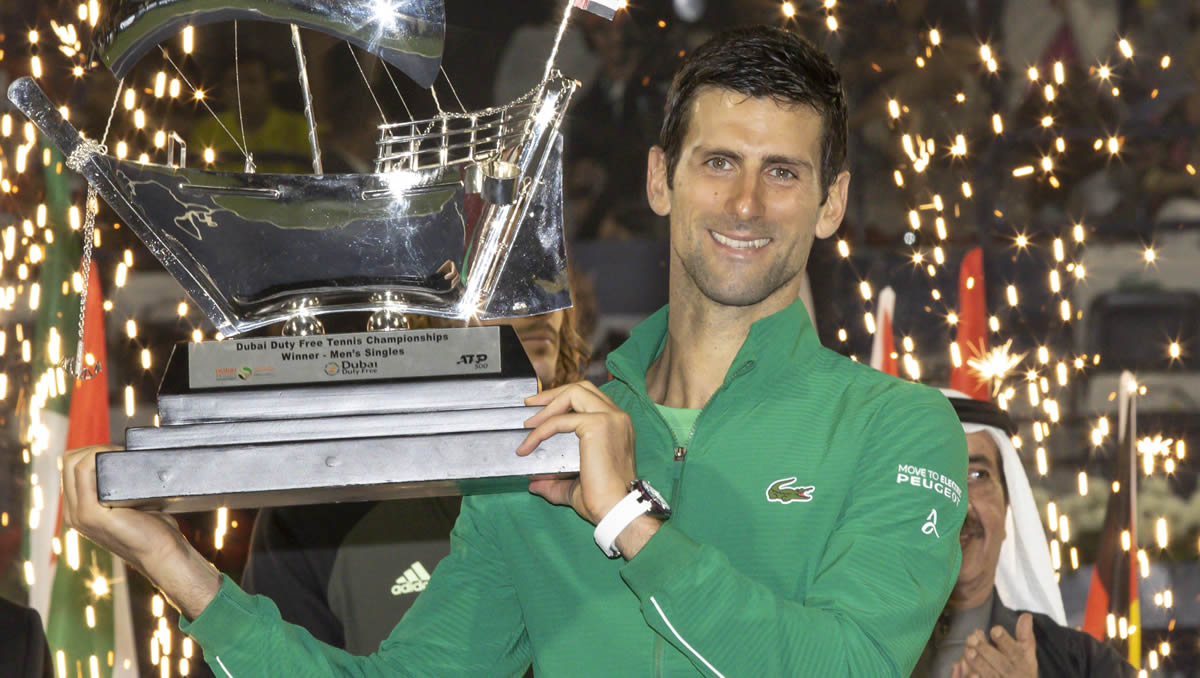 What more was there left to say about the achievements of world No1 Novak Djokovic? Well for a start, he was now sure to keep that top spot into a 280th week, staving off the challenge of the man who had shared the No1 ranking with him since June 2018, Rafael Nadal.

Djokovic needed to reach the semis in Dubai this week to continue his chase of the record-holders, Roger Federer—310 weeks—and Pete Sampras—286. Job done, and with precious few points to defend in the big Masters double-header of March, Indian Wells and Miami, he looked set to close that gap still further.

And with his run to the final, Djokovic extended his win-streak to 20, dating back to last November’s Davis Cup, then in January leading Serbia to victory at the ATP Cup, and going on to win a record eighth Australian Open title.

Along the way, he beat 10 top-20 players, including the other four top-five men in the world, and he had won 41 of 47 sets played this season so far.

That form stood out in Dubai, where he was playing his sixth final in pursuit of his fifth title. He had barely broken a sweat until his come-back win over Gael Monfils, saving three match points with the complete assurance of the best player in the world.

He was, then, the favourite to win his 79th career title, but if there was one player with more than a decent chance of causing the No1 some difficulty, it was the No2 seed Stefanos Tsitsipas.

The 21-year-old Greek, who was runner-up to Roger Federer in Dubai last year, had enjoyed a meteoric rise during his short time on the main tour. He picked up his first title late in 2018, along with a first final run at a Masters, and rose from 91 to 15 by the end of the year. Three titles from six finals last year, plus his first Major semi-final, took him No6 in the world with his victory at the ATP Finals.

And Tsitsipas was also on a decent winning streak, having won the Marseille title just six days ago. His semi-final win over Dan Evans took his run to eight matches, with just one set dropped—against Jan-Lennard Struff—in 17 played.

But another notable factor in this final was the balance in their previous four matches. The Greek beat the Serb in that first Masters final in Toronto, and again at the Shanghai Masters last autumn. Djokovic got the upper hand at the Madrid and Paris Masters.

Djokovic certainly recognised the talent and the threat as he looked ahead to the final:

“He’s one of the leaders of the new generation. He is a hard worker, dedicated, very charismatic guy, nice guy. He has a lot of talent, lot of passion… It’s anybody’s game really… I hope I can be at my best because I need to start better than I have tonight.”

In truth, he did not start at his best, and not as well as Tsitsipas. Djokovic was taken to deuce in the first game, and serving at 2-2, he faced deuce again, and then break point. Meanwhile, Tsitsipas was serving well—and he had notched up the best serving stats throughout the tournament—opening to love, holding with ease.

But this was moving along at pace, and Djokovic was soon into his rhythm, plying the corners, pinning Tsitsipas behind the baseline more than the attacking Greek would have liked. And then there were the drop-shots, perhaps the most destructive addition to the Djokovic tactical mix in recent months.

Tsitsipas had admitted to fatigue from his efforts last week in France, and from the swift turn-around in time-zone and contrasting outdoor conditions. Djokovic was making him run, and with the Greek on a piece of string, he seized the break with a searing backhand pass—his first backhand winner of the match—to break for 5-3. He made his second winner, down the line, to close out the set, 6-3.

The young Greek had made more winners, 11 of them, to just four from Djokovic, but the timing, the defence, and the tactics of the Serb kept Tsitsipas as bay, undermined his net attacks, wore down those energy levels.

A certain weariness surfaced in the fifth game with a double fault by Tsitsipas, and Djokovic swept in to break. The Greek slumped in his seat for the first time, but to his credit, he was not about to give up. He broke straight back, 3-3, after throwing in his own winning drop-shot play, and then forced a forehand error from the former champion.

But the writing was on the wall. Serving at 4-4, Tsitsipas’s forehand let him down in the face of penetrating attacks, and Djokovic made the timely break. It was the work of a minute or two to serve out victory to love—and perhaps appropriately, it was with another backhand winner—6-4, in little more than an hour and a quarter.

This, then, was Djokovic’s 21st consecutive match-win, to remain unbeaten so far this year despite playing seven top-10 men. Asked what his target was for the rest of the year, he made a throw-away joke—though with a glint of intent in his expression.

“To go unbeaten the whole season—no, I’m kidding.” He paused: “I’m not kidding actually. Let’s take things step by step. Obviously the more I’m winning, the more confident I am, the more excited I am competing every match. We’ll take things slowly.

And he later added:

“Of course, I’m trying to embrace the moment and appreciate where I am. I think this has been one of the best starts of all seasons I had in my career. I feel great on the court… I’m just grateful that I’m playing well, feeling well. I’ve won many matches now in a row. I’ll try to keep that run going. It’s just way too early to speak about how long that run might go.”

And the response of “one of the leaders of the new generation” to his second runner-up trophy? Tsitsipas said:

“It’s kind of disappointing trying so hard and not really getting the final result that you want. For sure I would love to see myself holding that trophy. Of course, he gave more than me and he deserves it.

“Keep failing until you make it, I guess. It’s a loop of constant repetition, trying to get better and learn from your mistakes. So to all the young kids out there, believe in yourself. It’s going to come.”

Though not if Djokovic has anything to do with it.