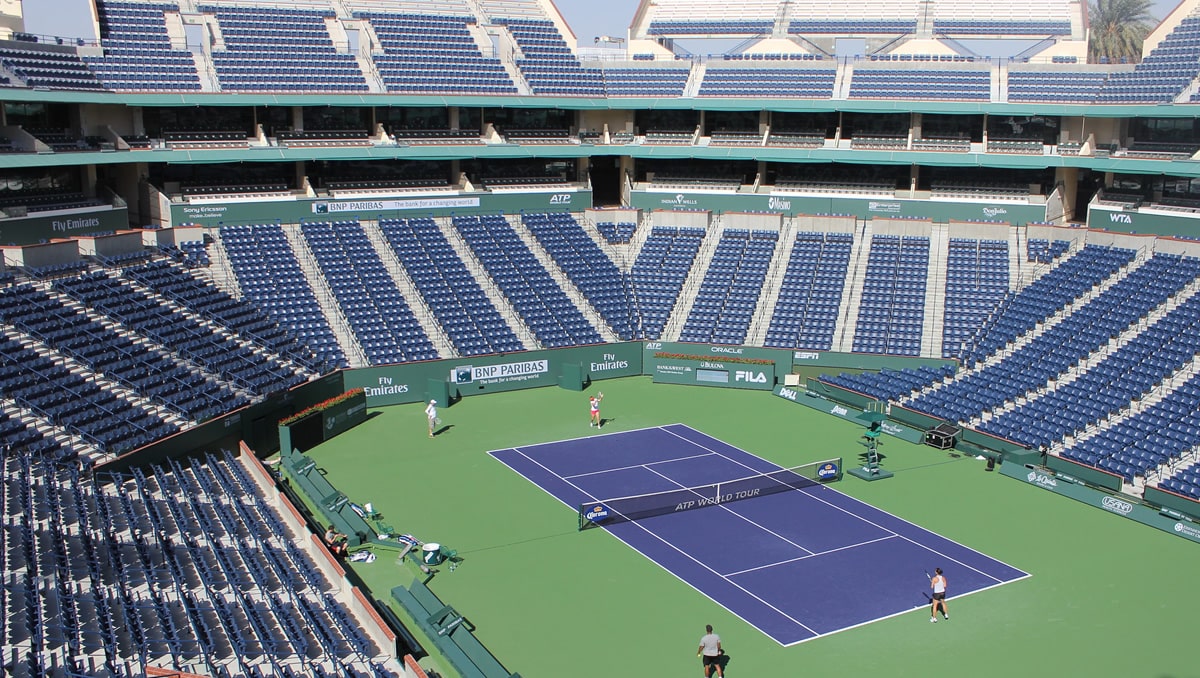 The writing was on the wall already in the beautiful Californian region of the Coachella Valley, where one of tennis’s most popular events is held every March.

On the eve of the two-week BNP Paribas Open at the Indian Wells Tennis Garden, the organisers have cancelled the event on the advice of the region’s public health officials.

The decision was made after one case of coronavirus was confirmed in the local area, leading to medical experts declaring it a public health emergency.

Dr David Agus, Professor of Medicine and Biomedical Engineering at the University of Southern California, said:

“There is too great a risk, at this time, to the public health of the Riverside County area in holding a large gathering of this size. It is not in the public interest of fans, players and neighbouring areas for this tournament to proceed. We all have to join together to protect the community from the coronavirus outbreak.”

The tournament is not just big but hugely popular: Indian Wells has been voted the ATP and WTA Masters/Premier ‘Event of the Year’ since 2014. However, the management team, headed by tournament director and former world No2 Tommy Haas, had already offered refunds to any tickets holders who had doubts about travelling there amid the current coronavirus emergency, and had alsoissued a swathe of regulations for players and officials in an attempt to alleviate the spread.

These included the welcome decision that ball kids no longer handle players’ towels, the universal wearing of gloves by volunteers and officials, and banning the exchange of materials between players and fans.

“We are very disappointed that the tournament will not take place, but the health and safety of the local community, fans, players, volunteers, sponsors, employees, vendors, and everyone involved with the event is of paramount importance. We are prepared to hold the tournament on another date and will explore options.”

According to the New York Times, the option of playing behind closed doors was rejected, and instead, patrons will be able to claim a refund—though clearly many thousands will have already paid out for travel to Palm Springs and beyond and for accommodation.

Indian Wells is one the biggest events in the tennis calendar, second only to the four Grand Slam tournaments. Both the ATP Masters and the WTA Premier Mandatory draws boast 96 singles players, plus 48 more in qualifying rounds—which were due to begin today—and another 64 players in each doubles draw. So big is the tournament, indeed, that it is held over two weeks, and attracts almost half a million visitors.

But the decision was taken late and fast, catching even the players by surprise. Many of them are already on site and practising, such as former champion Rafael Nadal, who tweeted:

“You probably all heard the news. Indian Wells cancelled. We are here and still deciding what’s next. So sad for all that is happening around the world with this situation. Hopefully soon solutions from the authorities. Stay all well and safe.”

He raises a question on the lips of almost every person involved in the tennis tour. Two Davis Cup ties this weekend were played behind closed doors, while the WTA had already cancelled 125K events scheduled to be held in China, the epicentre of the virus outbreak.

So Indian Wells’ sibling, the Miami Open, has to be of immediate concern, as there have already been deaths in Florida.

After Miami, the tennis road-show heads to the clay of Europe, one of the longest unbroken swings in the calendar, with Masters/Premier tournaments scheduled for Monte Carlo (which is located within a few kilometres of the Italian border), Stuttgart, Madrid and Rome. Italy has suffered the worst outbreak and mortality rate outside China, while cases in Spain are accelerating—there were five deaths this weekend in Madrid.

With the current rate of spread and health impact of Covid-19, it looks increasingly likely that this is just the beginning.

Tennis closes down in face of Covid-19: Miami, Monte-Carlo, Barcelona among events cancelled