Ole Gunnar Solskjaer’s side were looking to return to winning ways following a 2-2 draw with top-four rivals Leicester City at the King Power Stadium on Boxing Day.

Manchester United struggled to find a way past the Wolves defence despite the away side making changes to their backline for the trip to Old Trafford.

Edinson Cavani had the ball in the net in the second half but the Uruguay international was adjudged to have been offside.

Manchester United looked set to secure just a point and miss out on the chance to hoist themselves into second place in the Premier League table.

However, Rashford finally made the breakthrough in the third minute of added time when the England international’s strike was deflected into the Wolves net.

Match Of The Day host Lineker took to Twitter to heap praise on Rashford after the Manchester United striker finished 2020 on a high note.

Lineker wrote on Twitter: “So the man of the year @MarcusRashford finishes his year with another headline winning goal.” 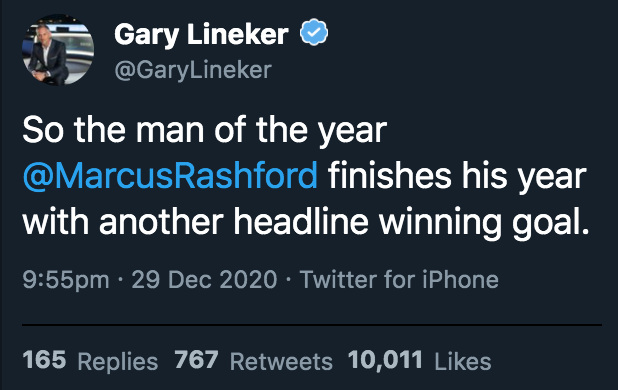 Rashford has scored eight times in the Premier League this season – only Bruno Fernandes has scored more top-flight goals for Manchester United this term.

The England striker has scored 23 per cent of Manchester United’s Premier League goals in the current campaign.

The Red Devils will host Aston Villa on New Year’s Day on Friday.