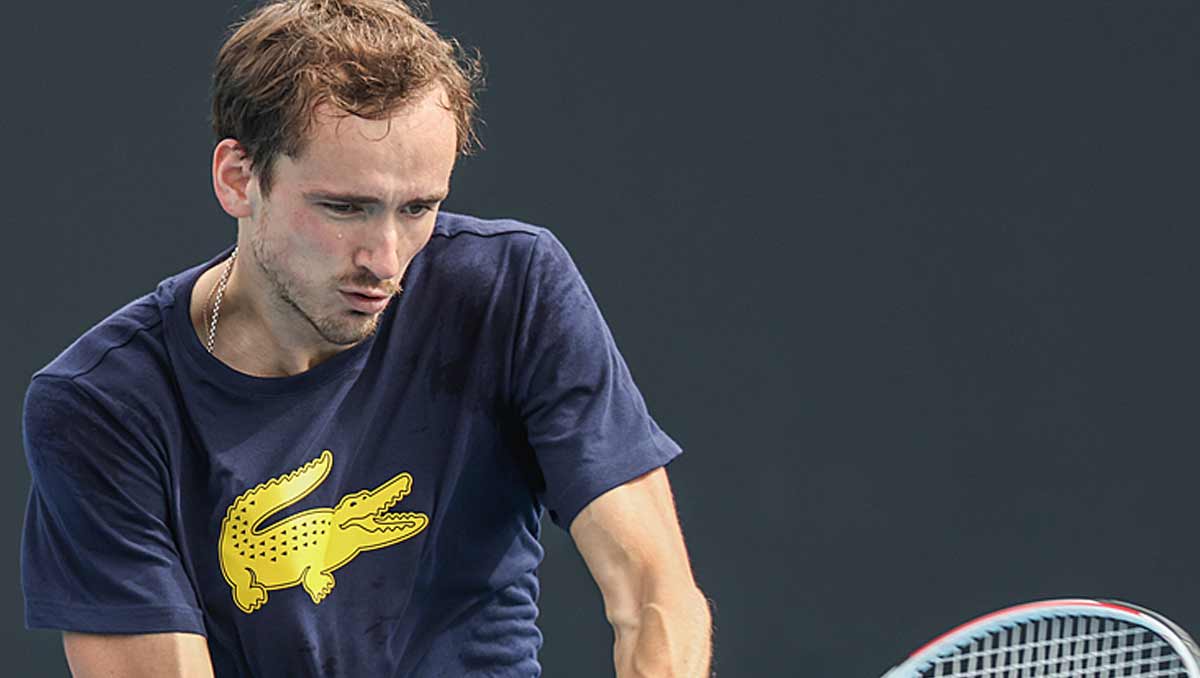 For the four teams who were playing their second ties of this 12-nation competition, the writing was on the wall.

The Russian team, boasting two top-10 players in Daniil Medvedev and Andrey Rublev, could seal a semi-final place with victory over Japan. And the Italian squad with two top-20 men could do the same with a win over France.

For Canada and Australia it was the opposite scenario: a win was essential to stay in the competition after losses in their first ties.

Russia, in particular, has looked a threat even before the draw was made. World No4 Medvedev reached an 11-win streak with his Tuesday win over Diego Schwartzman, having won the Paris Masters and ATP Finals back-to-back at the end of 2020. As for Russia’s No2, Rublev had gone 22-4 since late September, including three titles. Both had won their openers in Melbourne with ease.

And so it proved again against Japan. Rublev first dismissed Yoshihito Nishioka for the loss of only four games in 64 minutes. And it was a very clean and confident match for Medvedev, too, against a man heading his country from the platform of a protected ranking. But the reality of the situation was that Kei Nishikori had played little since his elbow surgery late in 2019—just two wins in six matches. Sure enough, it took the tall Russian an hour and a quarter to better the former No4, 6-2, 6-4.

Medvedev was, though, full of sympathy for Nishikori, who had not only played little tennis last year but was one of the unfortunate players to endure complete lockdown in Melbourne after coronavirus contact. The Russian said:

“He didn’t play a lot of matches lately, that’s for sure. And to come here and be 14 days in the room, no matter even if you do 10 hours a day… run, work out or something, it’s tough. In the first set he could feel it. He was missing everything.

It proved to be a similar story for Italy, but whereas their No2, Fabio Fognini, had conceded an unexpected loss against Dennis Novak in their tie against Austria—thus needing a doubles win to seal victory—he did not let the side down against Benoit Paire, 6-1, 7-6(2). Matteo Berrettini went on to guarantee the semi-finals with a win over Gael Monfils, 6-4, 6-2.

In both cases, the losing side took the doubles rubber, but with their singles men safely courtside and able to rest for their semis on Friday.

The Canadian duo of No12 Denis Shapovalov and No15 Milos Raonic had a hard time of it in their opening tie against defending champions Serbia under the leadership of world No1 Novak Djokovic. Shapovalov put up a sterling effort against Djokovic, resisting for almost two hours in a 7-5, 7-5 loss, and then the doubles strength of Serbia sealed the deal for the tie.

Against Germany, there was also precious little between them. Jan-Lennard Struff edged a big-hitting match against Raonic—two tie-breaks in two hours—leaving it to Shapovalov to try and better Alexander Zverev after winning their last two meetings. But Zverev edged the win after almost three hours, 6-7(5), 6-3, 7-6(4).

“I mean, definitely another tough loss, but good to get these kind of matches before a Grand Slam. Definitely want to be winning these, and I feel like I’m right there, and I should be. But I’ll try to make a couple adjustments, work harder, and hopefully I can have a good Aussie Open.”

Germany will face Serbia for an all-or-nothing tie to determine which nation goes on to face Russia in the semis.

Not for Greece, however, the luxury of two top-10 players, nor even two top-20 players—nor even two top-100 players. Just like world No3 Dominic Thiem, partnered in singles by No100 Novak, world No6 Stefanos Tsitsipas carries a huge weight in his team. His No2 is Michail Pervolarakis, ranked 462, and there is no doubles strength to compensate.

So no surprise that No38 John Millman took Australia into the lead with a 6-2, 6-3 win, but one of the most highly anticipated matches of the day was between two of the young stars on the tour: 22-year-old Tsitsipas took on 21-year-old Alex de Minaur.

The charismatic 6ft 6ins Greek got off to a flyer against the home favourite, breaking in the second game and holding for 3-0. But the Aussie with the lightning feet soon turned on the speed and shot-making to pressure his opponent. He could not convert a break chance in the third game but did so in the fifth to get back on serve.

However, the advantage did not last. Tsitsipas broke again, and held for 5-2, displaying some glorious backhands in the process. He served out the set, 6-3, and with his confidence growing, he opened with a love hold in the second.

Both players were now playing with greater intensity. The crowd was one of the biggest and rowdiest of the week so far—not only in support of the home team but from the big Greek contingent that lives in Melbourne.

The electronic line calling, while reducing challenges and arguments, introduces a time-lag that can be distracting in the heat of play. And the boundaries on the Rod Laver arena are vast, so the walk to collect towels takes time—and Tsitsipas fell foul of a time warning early in the match. Stir in the shouts of encouragement or instruction from the respective team corners, and there is a lot to take on board for the players.

Tsitsipas did threaten at 4-4, but could not convert a break point. The quality of play steadily cranked up at this vital stage of the match, and as the set reached the business end, both produced some sizzling rallies. One of 24 shots brought up a break point/set point for de Minaur, but Tsitsipas benefitted from some leniency by the umpire as he again went over the 25-second time-limit. The Aussie then overhit on his second break chance, and could not control a drop volley, leaving Tsitsipas to hold on for 5-5.

And the Greek translated his adrenalin rush into a break in the next game, and served out the win with an ace after an hour and half of quality tennis.

It was a good start to his 2021 season, but his problem now was that, to keep Greece in the hunt, he had to return to play doubles too. Meanwhile, the Aussies could draw on separate doubles expertise in the shape of John Peers, a former Australian Open doubles champion, and Luke Saville, runner-up in the Australian Open doubles last year.

Sure enough, the home team stole a lead early in the first set, breaking again for 6-3. But the Greeks broke in the first game of the second set, and Pervolarakis battled to a hold on his serve with Tsitsipas making some spectacular interceptions at the net: 3-1.

They had a chance to break again for 4-1, but finally levelled at 6-4. Now, though, that doubles expertise paid off, and the aggressive tactics of the Aussies swamped the Greeks to win the tie-breaker, 10-5.

Greece now has to beat Spain tomorrow to level up the group at a win apiece. The sound money, though, will be on the multifaceted talent of Spain to take that place in the semis against Italy.