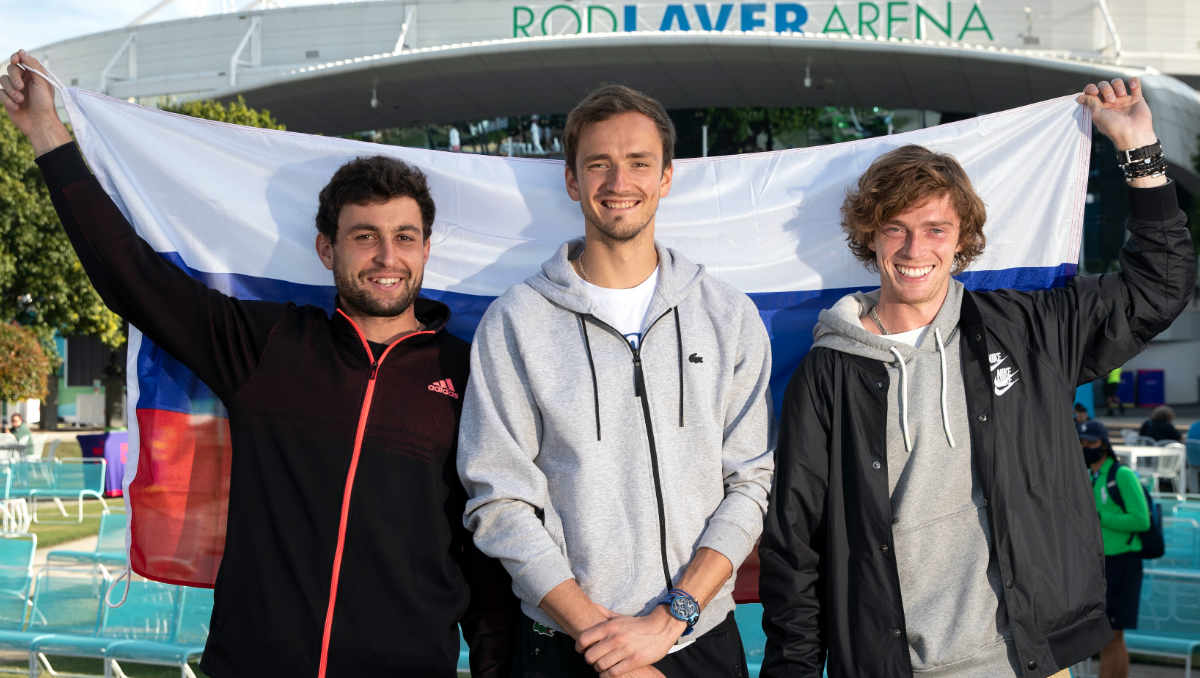 One extraordinary week down, one week to go in an Australian Open that will be long remembered as the one that managed to defy a coronavirus pandemic—well, almost.

That all the players had to quarantine for two weeks on arrival in one of the most COVID secure countries in the world was a huge test—and all the more so for the 70+ who were not even allowed out of their rooms after sharing their flights with a positive case.

That the only preparatory week of competition then featured six tournaments, all played at Melbourne Park, took organisation of the highest calibre.

And it all eventually took off with that rare thing in tennis for a year—live fans. Well down on the usual capacity for sure, and split into three distinct parts of the Melbourne Park, but fans nevertheless.

And then, just as the players got used to the noise and the atmosphere, fans were once again excluded—unceremoniously told to leave the site on Friday at 11.30pm as a five-day curfew announced the discovery of the virus at one of the hotels.

Through all this, the tournament has managed to keep going, and to produce some outstanding matches—the likes of Naomi Osaka beating Garbine Muguruza via two match points to reach the quarters, or Novak Djokovic battling through injury to beat challenger Taylor Fritz in five sets.

There was the ever-boisterous presence of Nick Kyrgios, the Aussies favourite, unseeded but thrilling the crowds with a five-set win over No29 seed Ugo Humbert and then taking a two-sets lead over No3 seed Dominic Thiem—only to fall at the last in five sets.

But where Kyrgios failed to tread, women’s No1 Ash Barty has picked up the home-team’s baton, not dropping a set on the way to the quarters, and making a good case to be one of the favourites for the Australian title: She would be the first home champion, man or woman, since Chris O’Neil in 1978.

And what about another Aussie fighting his heart out after years of injury setbacks, Thanasi Kokkinakis, who faced another of the title favourites, No5 seed Stefanos Tsitsipas? It would become the longest match of the tournament, a five-set thriller of more than four and a half hours, with 40 aces, 43 points won at net, and 136 winners between them.

But they have all been whittled down to the quarter-finals as Week 2 gets under way. Some milestones have already been achieved by the 16 men and women left standing, but a good many others are there for the taking.

Some standout notes for the quarter-finalists

• No18 seed Grigor Dimitrov has spent less time on court than any of his fellow quarter-finalists, just over six and a half hours—but only two minutes less than Andrey Rublev… both benefited from a mid-match retirement during their run to the last eight.

• After nearly a year away from competition, Barty has established herself as a real contender in Melbourne after reaching the semis last year. She won the Yarra Valley Classic, and has yet to be really pushed in the Open main draw. Next, she faces No25 seed Karolina Muchova, who has a 6-4 record over top-20 players in Majors.

• No22 seed Jennifer Brady has dropped the fewest games among the final eight women (17) and has been broken just twice. She also has a 20-5 hardcourt record since the tour’s resumption last August, when she reached the US Open semis.

• Brady faces fellow American, the unseeded Jessica Pegula, who is into her first Major quarter-final after beating No12 seed Victoria Azarenka and No5 seed Elina Svitolina, plus former Major champion Sam Stosur.

• For both Brady and Peluga, career-high rankings beckon. Brady will rise to 20 from 24 and Pegula from 55 to 43—and whichever comes out the winner in their match will earn a still bigger boost.

• No2 seed and former champion Rafael Nadal has faced little trouble to reach the quarters, not dropping a set. He has now won 33 consecutive sets dating back to his remarkable run at Roland Garros, and has played only two tie-breaks to boot. He is now just three short of Roger Federer’s Open record of 36 straight sets.

• It is Nadal’s 13th Australian Open quarter-final, his 43rd Major overall, and if he wins the title, he will overtake Federer’s record of 20 Major titles to reach 21—and become the first man in the Open era to win each of the four Majors on two or more occasions.

• World No4 Daniil Medvedev, No8 Andrey Rublev and No114 Aslan Karatsev have become the first three Russian men to reach the quarters at the same Major in the Open era. And each has claimed significant results along the way.

• Medvedev has notched up a winning streak of 18 consecutive matches, while Rublev won the most titles and matches on the ATP Tour in 2020. They face each other for a fourth time in the quarters, though have played one another many times coming up through the Russian ranks. As for qualifier Karatsev, he has become the lowest ranked player in 30 years to reach the Australian quarters

• The 27-year-old Karatsev had won just three main-tour matches, never broken the top 100, and never qualified for either a Major or a Masters before this Australian Open, and has become the first player in 25 years to reach a Major quarter-final on his debut. He has already jumped around 50 places in the rankings to reach 63 next week—more if he beats Dimitrov.

• In reaching the quarters, Djokovic became only the second man after Federer (369) to record 300 match-wins at the Majors. He is bidding to extend a 10-match winning streak against top-10 opposition at the Australian Open—that last being the then No8 Stan Wawrinka in 2014.

• Alexander Zverev recorded his 50th match-win at a Major to set the quarter-final showdown with Djokovic. There, he will hope to beat a top-10 player at a Major for the first time. The 23-year-old is also Zverev is also looking to become the youngest Major men’s singles champion since Djokovic in 2011.

• Serena Williams is appearing in her 20th Australian Open, just one behind her sister Venus’s Open record of 21 appearances. Her last Major title was won in Australia when two months pregnant, and she continues to target the record of 24 Majors held by Margaret Court.

• Williams will play No2 seed Simona Halep for the first time since the Romanian beat her in the 2019 Wimbledon final. This week, Halep scored her 100th Major match-win by beating Iga Swiatek, who beat her in the Roland Garros final last October.

• At 35-years-old, Su-wei Hsieh will be the oldest player in the Open era to make her Major quarter-final debut. The doubles No1 is the lowest ranked woman in the quarters, but beat No8 seed Bianca Andreescu in the second round, and No19 seed Marketa Vondrousova in the fourth round. But the lowest ranked woman in the quarters will now play former champion and No3 seed Naomi Osaka.

• Djokovic is bidding to reach the semis of a Major for the 39th time, second only to Federer. The No1’s victory against Fritz was his 30th victory in a 5-set match at the Majors, equalling another Federer record. The Serb will imminently equal one of Federer’s biggest records, however: He is guaranteed to remain No1 come 1 March, a tally of 310 weeks.