Sinner, Shapovalov and Khachanov also into Round 3 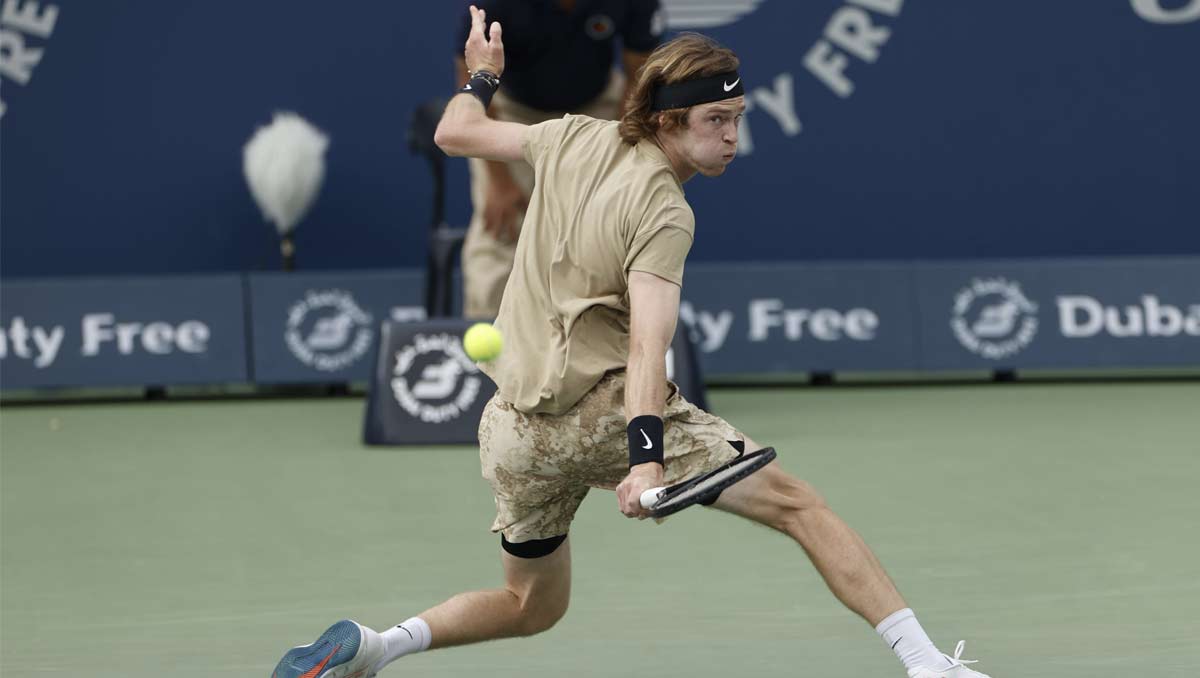 With 16 seeds rather than the usual eight at this year’s expanded Dubai Duty Free Championships—a reflection of the larger draw being played in the week left vacant by the Indian Wells Masters—Dan Evans was one of the men to benefit. At No12, he enjoyed a bye in the first round.

What is more, he should by now have been familiar with the conditions: He had spent an extended period as Roger Federer’s hitting partner before both men headed up the coast for the Qatar Open in Doha. He would ultimately lose a two and a half hour three-setter against Federer himself, just losing out in 7-5 deciding set.

Evans, though, might have hoped for a slightly more straightforward opener back in Dubai, but he got world No42 Aslan Karatsev. And although the Russian had yet to reach a tour final, he made an explosive run at the start of the year to the semis of the Australian Open—via three rounds of qualifying. Along the way he beat No9 seed Diego Schwartzman, then Nos 19 and 21 Felix Auger-Aliassime and Grigor Dimitrov. It propelled the Russian from 114 to his current career high.

In Doha, Karatsev put in another good showing against top seed and world No4 Dominic Thiem. It took two hours and three sets for the Austrian to finally beat him.

So Evans needed to hit the ground running if he was to make the third round. In the event, it was Karatsev who broke first to lead 3-2, but Evans replied in kind—only to be broken again. This time the Russian held, 5-3, and after a love hold from Evans, he served out the set, 6-4, in a tidy 42 minutes.

The second set began in similar style, with an immediate break by Karatsev, followed by a break back. Evans had to battle through a long third game and eventually held, but was soon up against it once more on his next service game, facing two more break points courtesy of a winning backhand down the line from the Russian. A wayward forehand, and Evans was down a break.

Karatsev’s big serve and powerful baseline strikes continued to punch holes: a love hold made it 4-2. But from 0-40 down in the eighth game, Evans fought back to deuce, and then break point, and he forced an error to level the match, 4-4.

In the blink of an eye, then, Evans was heading to the set, Karatsev serving to save it. A blistering cross-court forehand from the Briton and he had break points, and a netted forehand from the Russian levelled the match, 6-4.

Evans’ troubles began right at the start of the third, a 12-point game and a break. And while there was little in it through the rest of the set, the Briton could not work a break chance. The wild card held again to love, but serving for the match, he offered Evans a reprieve, 15-40. However, Karatsev reeled in the Briton, and took the match with a forehand winner, 6-4.

Karatsev will next play No17 seed Lorenzo Sonego, with the winner going on to meet the teenage No16 seed Jannik Sinner or the 32-year-old Roberto Bautista Agut, who advanced to the third round via a retirement from Matt Ebden at 4-1 up.

Sinner faced a tough test against the 23-year-old Alexander Bublik, who has already been a runner-up twice this year, with two top-10 feathers in his cap. The exciting Italian had to work his way back from a lost first set, 6-2, then edge a tie-breaker, 7-6(2), before winning through to that Bautista Agut meeting, 6-4, after more than two hours.

At the bottom of the same half, No2 seed Andrey Rublev kept up his unbroken run in ATP500s that has now stretched to 21 after winning every match at that level since losing at this very tournament a year ago.

Since then, he has won Hamburg, St Petersburg, Vienna and Rotterdam, while also reaching the quarters at all three Majors played in that span—and for good measure, shared the ATP Cup title with compatriot Daniil Medvedev.

His win over the impressive and fast-rising Emil Ruusuvuori, 6-4, 6-4, served only to reinforce the Russian’s ability: he made just half a dozen errors for 26 winners in a high-quality, fast paced match.

It is an extraordinary run that the modest Russian finds embarrassing to discuss: witness his comments after this match:

It is the second longest streak at the 500 level, with only Federer owning more: 28.

Rublev will next meet either No15 seed Taylor Fritz or the Doha champion Nikoloz Basilashvili, who beat Fritz in the semis there.

In the top half of the draw, No3 seed Denis Shapovalov had to face one of the highest-ranked non-seeds, Jan-Lennard Struff, who had beaten him in their last four matches.

Shapovalov, playing in Dubai for the first time, clearly took to the fast conditions very quickly, and raced out to a 5-0 lead before Stuff got on the board.

Then with the first set in the bag, 6-1, the Canadian powered through the second to take the win, 6-3, in barely an hour. And, in an extraordinary twist, Shapovalov’s stats matched those of the No2 seed: 26 winners, six errors.

He said: “It definitely wasn’t an easy win, as I’ve struggled against Struff in the past… I was a little bit nervous at the beginning, but I got through those emotions and I’m very happy with the win… The courts are quick, so it suits my game.”