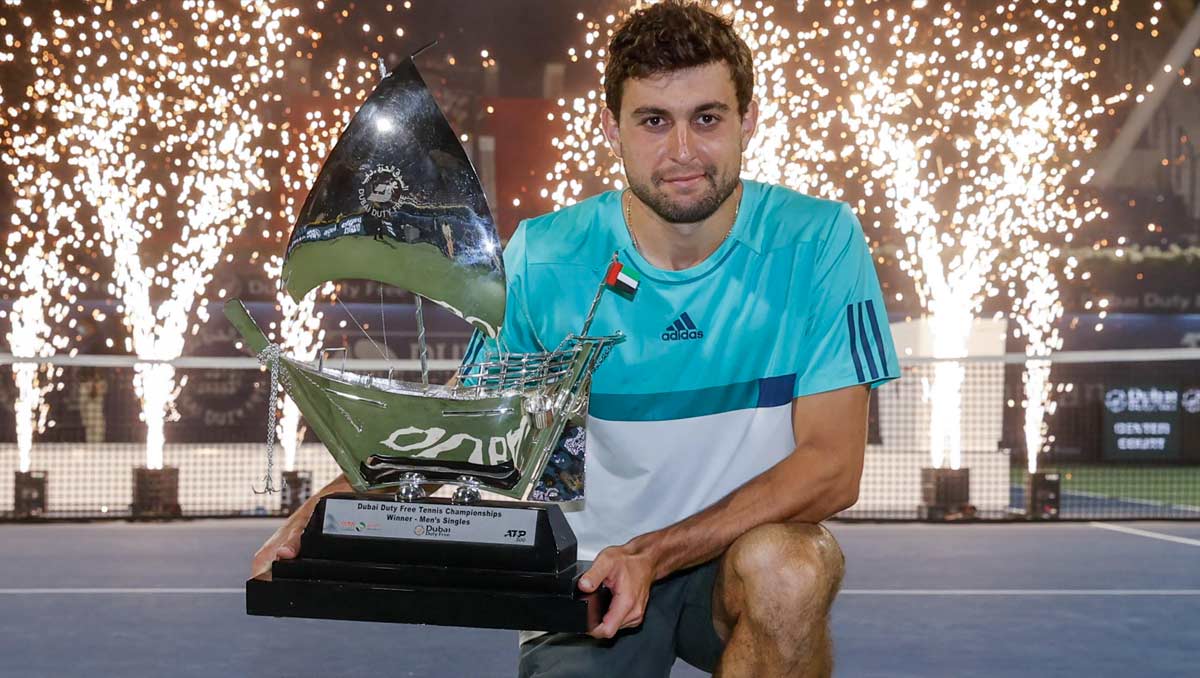 On many fronts, this year’s Dubai Duty Free Tennis Championships has experienced change.

In a disrupted tennis calendar that has tried to get back to some version of its old self following the long pandemic lockdown in 2020, dates became flexible. The strict quarantine arrangements for the Australian Open and its lead-up events shunted Doha, Rotterdam, and a slew of others into new weeks, including Dubai. With the big Indian Wells jamboree postponed indefinitely, the 500 in the desert, and its sibling in Acapulco, moved to mid March.

Dubai expanded its draw from 32 to 48, its eight seeds to 16, and it promised to be a glittering affair. Until, that is, some of the biggest names leached away.

World No2 Rafael Nadal, who had been struggling with a back injury, turned down the offer of a wild card. No6 Roger Federer decided to return to training after two matches in Doha—his first in a year following knee surgery. A third former champion, Andy Murray, also withdrew following the announcement of the birth of his fourth child, followed by yet another former champion, Stan Wawrinka, citing fatigue.

With world No10 Matteo Berrettini and No12 Gael Monfils also pulling out, and then No24 Borna Coric withdrawing with a shoulder problem, the draw took on a very different look from the one anticipated, yet no less watchable for that. For here was a line-up that boasted some of the hottest young talent around.

World No8 and the second seed, Andrey Rublev, was putting together a record unbeaten run at 500 events, 23 and counting, and as he entered his semi-final, he had yet to drop a set in Dubai.

The No3 seed, Denis Shapovalov, was thriving on the hot, fast courts, where he put 26 winners past each of three opponents in a row, also without dropping a set. He made it to his first semi-final this year, after making two in the latter stages of the short 2020 season in St Petersburg and the Rome Masters, and was beginning to look a strong contender for his first 500 title.

Then there was the youngest player in the top 100, Jannik Sinner, ranked 32 and proving to be not just an all-round talent but a resilient, determined competitor, too: He twice came through testing three-setters to reach the quarters.

Sinner had ended the 2020 season by winning in Sofia and began 2021 with the Great Ocean Road title in Melbourne. That made him the youngest tour champion since Kei Nishikori, the youngest two-time champion since Novak Djokovic, and the youngest player to win titles in consecutive appearances since Nadal: impressive figures.

Yet all three young stars would be beaten by two players who went on to set an unexpected final. Now wild card Aslan Karatsev, ranked 42, and qualifier Lloyd Harris, ranked 81, were within touching distance of their first ATP title—the first time a wild card and a qualifier had contested a 500 title.

Karatsev earned a huge victory in the semis to reach his first tour final, ending the streak of Rublev, having won the Doha doubles title just last week with his young compatriot.

It was the latest in an outstanding 2021 breakthrough for Karatsev, who reached the semis of the Australian Open—via three rounds of qualifying. Along the way he beat No9 seed Diego Schwartzman, then Nos 19 and 21 Felix Auger-Aliassime and Grigor Dimitrov. It propelled the Russian from 114 to his current career high.

And this week, he ended the hopes of more seeds: Dan Evans, Lorenzo Sonego, Sinner, and Rublev, all in three setters.

If that was a remarkable story, the one being written by Harris was perhaps even more memorable. The 24-year-old South African was playing his eighth match in as many days to reach his second tour final. Little more than a year ago, also as a qualifier, Harris lost his seventh match in eight days to Rublev in the 2020 Adelaide final.

In Dubai, he not only got the better of Shapovalov in the semis, he put out top seed Dominic Thiem, the No14 seed Filip Krajinovic, as well as former world No4 Nishikori.

It had taken Harris more than 11 hours on court to reach the final, but even more for Karatsev, after four of his five matches went to three sets. This, then, was iron-man territory: who would have the physical and mental strength to win?

The Russian was immediately on the offensive, as he had been all week, taking the ball early, unbalancing the server. Harris had put together one of the best serving performances in Dubai, but after slotting two opening aces, he felt the pace of Karatsev’s returning to force errors, and was broken.

By the time he served a second time, Harris was 0-3 down, but got his groove for a love hold. He worked a break-back chance, but Karatsev resisted and held with a running forehand down the line, clean as a whistle 4-1.

And Karatsev continued to rush his opponent with early strikes, hit cleanly, and prevented Harris coming forward to break the rhythm. The South African held off two more break points, but Karatsev went on to serve out the set to love, 6-3, with some great hitting to the baseline corners and a 12th winner.

The South African was being rushed by the penetration and direction of Karatsev’s strikes, taken early and on the rise, and fired to opposite angles. Could Harris absorb the pace and turn it to his advantage?

The answer was swift: a break of the Harris serve in the first game of the second set, and he had to save more break points in the third game.

He just about stayed with the Russian until the seventh game, but there was simply no way through the complete, power game of Karatsev, who broke again, and served it out, 6-2, with a huge overhead winner.

It had been an exceptional performance, just an hour and a quarter to produce 27 winners, and a memorable way to win a first title. It also propelled him from 42 to 27 in the ranks, though the Russian’s downbeat delivery of “I am very happy” was about as much as he would give away.

Karatsev is a man of few words, but then his tennis this year has been eloquent enough about the hard graft that has gone into a couple of impressive Challenger seasons and a dedication to self-improvement, both physically and mentally, that was perhaps galvanized by working closely with team-mates such as Rublev and Daniil Medvedev during January’s ATP Cup.

Harris, however, should, also take a lot of positives from his performance this week, and will surely relish the jump in his rankings to a new career high of 52.