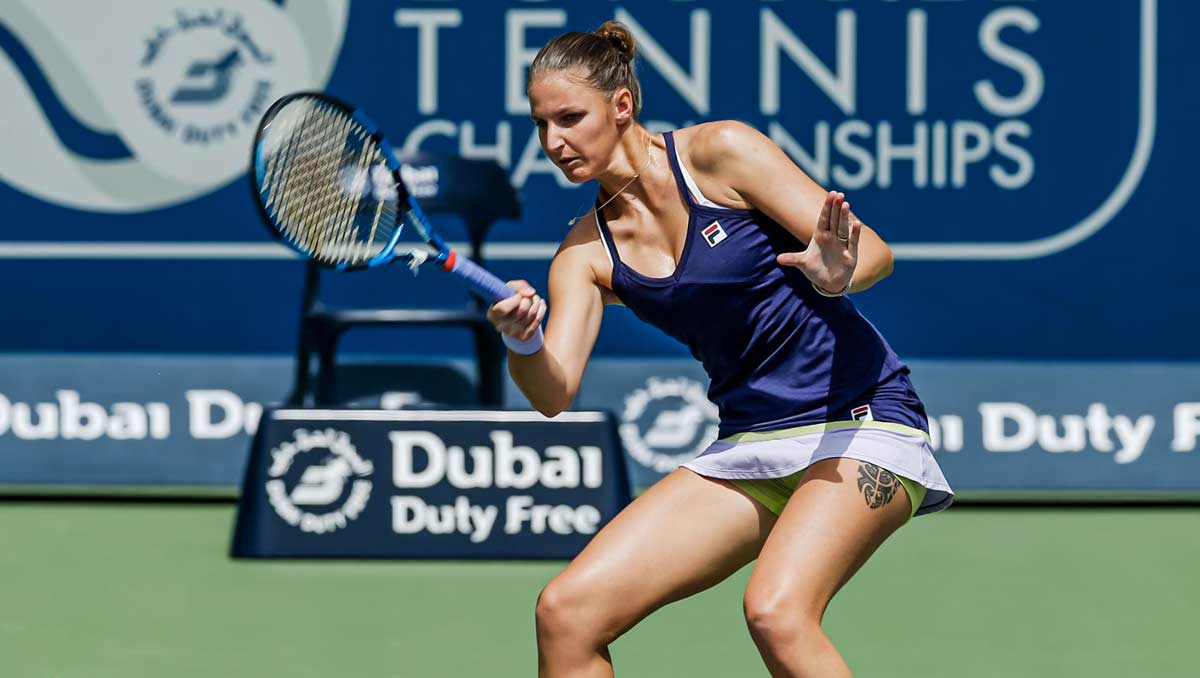 The oldest player in the draw, 35-year-old Svetlana Kuznetsova, a former world No2 and twice a Major champion, upset No1 seed Elina Svitolina in impressive style, 2-6, 6-4, 6-1, to reach the third round at WTA1000 Dubai Duty Free Championships.

Svitolina claimed back-to-back Dubai titles in 2017 and 2018, but Kuznetsova has the most match-wins among active players at the event, being a three-time Dubai runner-up: This was her 21st match-win at the prestigious tournament. It also marks the Russian’s first top-five win since she beat then-No2 Ashleigh Barty and then-No3 Karolina Pliskova en route to the Cincinnati final in 2019.

Kuznetsova will next play Barbora Krejciova who beat Jelena Ostapenko, 6-3, 6-1.

No2 seed Pliskova had to battle for more than two hours in her opener against Anastasija Sevastova before finally reaching Round 3, 6-3 6-7(5), 6-2.

Playing in the main draw in Dubai for the eighth time, Pliskova, a former runner-up,

had to fight off two break points as she served out the first set, and then was denied victory in the second set when the ball clipped the net on one of her two match points to give her opponent a reprieve.

She led the tiebreak 4-1, but could only steal one more point to concede the set. However, she went on to win the decider on her third match point.

She said of her win:

“I had a lot of chances, especially in the second set. I was up in the tiebreak on my serve and I thought I could win much faster. On the other hand, I don’t have to go and practise because if I won in straight sets I would have to go, so that’s good!”

Pliskova will next play the in-form American, Jessica Pegula, who beat Kristina Mladenovic, 6-1, 6-2.

Former champion and No6 seed Belinda Bencic was also stretched to the limit, needing more than two and a half hours to beat Veronika Kudermetova, 6-4, 5-7, 6-4.

Bencic, who won in Dubai in 2019, also struggled to close out her match in a nail-biting final game, where she faced a break point for 5-5 and was taken to deuce four times before eventually sealing it at her fourth attempt. Bencic will next face wild card, Anastasia Potapova, who put out the No11 seed, Madison Keys 6-4, 6-3.

Gauff, who has been taken to three sets in her last seven matches, winning six, said afterwards:

“I thought I played well. I’m just staying in there fighting every point, to be honest. Today she started off strong and I was making errors but I found my rhythm in the second and third sets.”

At a current world No40 and playing with a wild card, Gauff came through qualifying to reach the semis of the Adelaide International a fortnight ago, and won her first match in Dubai, 7-6(8), in the deciding third set against Ekaterina Alexandrova.

There were easier wins for some other seeds, though. No3 seed Aryna Sabalenka cruised past former finalist Alize Cornet, 6-2, 6-4, while reigning Roland Garros champion and No8 seed Iga Swiatek, still only 19 and at a career-high 21, enjoyed a more straightforward win over lucky loser Misaki Doi, 6-2, 6-4. Elise Mertens and Garbine Muguruza also made seamless progress to Round 3.

In one of the other big upsets of the tournament so far, qualifier Tereza Martincova defeated No5 seed Kiki Bertens, 6-1, 6-4.

There was disappointment for No4 seed Petra Kvitova, who won the Qatar Open in Doha in superb style at the weekend. She was forced to retire at 2-6, 3-4 down against Swiss player, Jil Teichmann, with a right thigh injury.