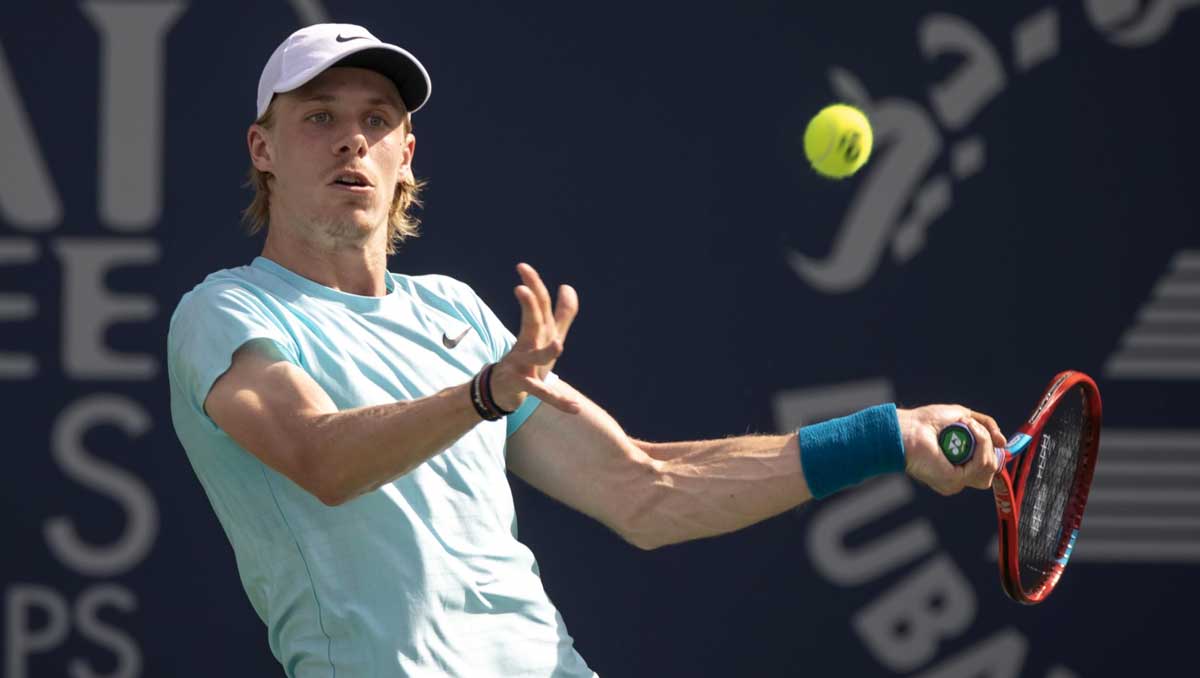 From a big draw that boasted 16 seeds in the top 32, the quarter-finals were left with just three, and they happened to be the youngest among the final eight.

Leading the pack was No2 seed Andrey Rublev, age just 23, and working his way towards a remarkable record. He remained on an unbroken run in ATP500s that had now stretched to 22 after winning every match at that level since this very tournament a year ago.

Since then, he had won Hamburg, St Petersburg, Vienna and Rotterdam, while also reaching the quarters at all three Majors played in that span—and for good measure, shared the ATP Cup title with compatriot Daniil Medvedev.

But the day’s schedule began with the 21-year-old No3 seed Denis Shapovalov, who was playing in Dubai for the first time—though he had enjoyed a valuable training block in the city’s warm, dry conditions in a change to his usual schedule. He admitted that the decision with coach Mikhail Youzhny had allowed him to work on his footwork, movement, and serve, and had helped keep him fresh in mind and body.

It had showed in his tennis: swift wins with expansive, attacking tennis over Jan-Lennard Stuff and Hubert Hurkacz. He had notched up 26 winners in each contest, but could he do the same against his latest opponent, the unseeded 34-year-old Jeremy Chardy?

The resurgent Frenchman was aiming for his third semi-final of the year after deep runs at the Antalya Open and Great Ocean Road Open in Melbourne, but he had done things the hard way.

In Dubai alone, he had played three three-setters, forced to play first the No9 seed Alex de Minaur, and yesterday, the No8 seed Karen Khachanov. Add in nine more three-setters in 15 matches this season, plus opting into the doubles draw this week, and it was little wonder that Chardy began to show signs of fatigue against the irrepressible tennis of Shapovalov.

For this was a pacey affair, with short rallies dominated by serves and one-two strikes. And all credit to Chardy: he became the first man this week to take more than four games from Shapovalov in a set.

A love hold by the Canadian took it to 5-5, with an outstanding 12/13 on his first serve and just four points dropped on serve overall. And Chardy, for his part, had dropped only five points, but that suddenly changed with the first deuce of the match. A blistering couple of shots from Shapovalov took full advantage, and he broke to serve for the set. He closed it out with 11 winners to the good, and with 24/28 points won on serve, 7-5.

By the time the Canadian had served for 3-3, he had dropped only one more service point, his first double fault. He was then ruthless in dealing with the second break point of the match, fired a red-hot return, drew the error, and broke to serve for the set.

It was the work of a moment to finish it off, 6-4, and yet again with 26 winners on the board—and only 13 errors—and a mere six points dropped on serve throughout.

It takes Shapovalov to his first semi-final this year, after making two in the latter stages of the short 2020 season in St Petersburg and the Rome Masters.

He put his outstanding form down partly to the work done in that training block:

“Definitely I focused on my serve a lot in the last few weeks, have more variation, am very happy with way I’m serving. We worked on my footwork, and playing from different parts of the court, and changing my position throughout the point and rally… I’m feeling the ball well on both sides, but I think it’s most to do with the footwork, I feel I’m moving well and when I’m moving well, everything goes into place.”

He could next play the lowest ranked man among the final eight, and Lloyd Harris was attempting to become the first qualifier to reach the Dubai semi-finals after putting out the top seed Dominic Thiem. Harris’s problem was the unseeded Kei Nishikori, a former No4 who was fast regaining his form this week as he continued his return from elbow surgery.

The third seeded man in the quarters, just making the cut at No16, was the teenage Jannik Sinner, a man tipped by many to make it right to the top of the sport in the coming years. His achievements in the last few months served only to reinforce that view.

Here, he had beaten big names in back-to-back three-setters, Alexander Bublik and Roberto Bautista Agut, and now he faced one of the form men of 2021, albeit ranked at 42. Aslan Karatsev had made an explosive run at the start of the year to the semis of the Australian Open—via three rounds of qualifying. Along the way he beat No9 seed Diego Schwartzman, then Nos 19 and 21 Felix Auger-Aliassime and Grigor Dimitrov. It propelled the Russian from 114 to his current career high.

It certainly looked as though the seeding would hold in the early stages, as Sinner broke in the second game and opened a 3-0 lead, but serving at 4-2, Karatsev upped his level, shook off the fatigue of two long three-setters, and broke.

Sinner refocused at 4-4 and regained the edge with a hold, then pressed the Russian hard through a seven-minute game before Karatsev levelled 5-5. It would take a tie-break, and there, Sinner again edged the first advantage, and worked three set points, 6-3. Karatsev came up with a winning cross-court forehand, but the teenager fist-pumped in celebration as a Russian backhand went wide after an hour of play: 7-6(5).

The intensity carried into the second set, and it was Sinner who was having to dig deep to stave off an immediate break, five chances for Karetsev in the second game. The Russian finally got the breakthrough with a forehand onto the base and sideline junction after 12 minutes, and held for 3-0. It was enough to guarantee the set, 6-3.

And rather than Karetsev looking the more tired man, it was Sinner, showing some uncharacteristic frustration as the Russian fired off angled winners to the corners of the court to break for 4-2. Karetsev broke again, 6-2, after two and a half hours, with 41 winners and only 25 errors on his account.

He will next play Rublev or the 44-ranked Marton Fucsovics for a place in his first tour final. He is already assured of a career-high ranking, up to 38—closer to 32 if he makes that final.