Shapovalov: “I feel fresh mentally and physically, and feel in great shape. Feels like everything is coming together” 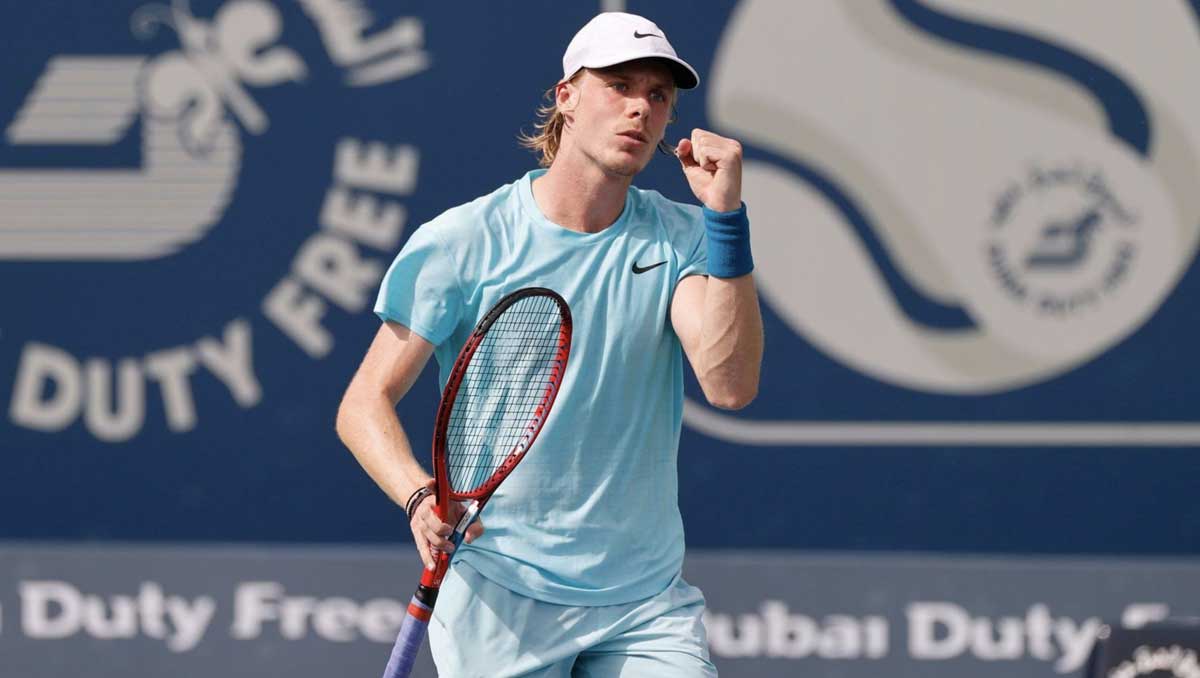 Denis Shapovalov, the No3 seed and playing for the first time at the Dubai Duty Free Championships, has taken to the warm, fast conditions of the Aviation Club courts like a duck to water.

But given that the charismatic young Canadian with the explosive single-handed game chose to spend time in Dubai ahead of the tournament, perhaps it should be no surprise.

He touched on the subject after his demolition of Jan-Lennard Struff in his first match this week:

“Misha told me the balls would be flying, but that pretty much suits my game. From the first practice I was able to feel the court well.”

‘Mischa’ is former world No8, the now retired Russian player Mikhail Youzhny, who has been working with the young Canadian since before the coronavirus lockdown stopped tennis in its tracks straight after last February’s Dubai event.

It is a partnership that continues to flourish, bringing increasing maturity to the exceptional Shapovalov talent. And that talent has never been in doubt since he first stepped into the tennis spotlight with the junior Wimbledon title in 2016.

It seemed no time at all until he was making headlines on the senior tour, too. In 2017, age 18, he made the fourth round of the US Open via qualifying, having also reached the semis of his home Masters in Montreal, where he beat Rafael Nadal. By year’s end, he had broken the top 50, and was at 23 the following June.

In 2019, as he transitioned from 19 to 20 years old, he reached a third Masters semi, then the final of the Paris Masters. He ended the year in the final of the Davis Cup and ranked No15. And he had garnered plenty of fans along the way—both for his expressive, explosive tennis and his charming, guileless personality.

Of course, 2020 would be a short season, but it gave Shapovalov time to work with Youzhny and, at the Russian’s suggestion, a sports psychologist to help improve the mental side of his game. The Canadian has gone on to admit:

“He’s really helped me get rid of all the anger and emotions I have in the matches and just let myself play freely, and it lets me just play my game at all times.”

As for Youzhny’s contribution, Shapovalov is clear:

“I think he just made me a smarter player. I’ve always had the flashy shots: the big serve, the big forehand. But he’s definitely helped me implement my net game and returns and just making myself a trickier player to play against and making it harder for other opponents to play against me.”

It all paid off on the resumption of the tour last August. The Canadian, still only 21 years of age, made his first Major quarter-final at the US Open and, switching to clay, the semis of the Rome Masters.

And so to 2021, and another adjustment to his usual preparation. Instead of heading to the indoor chill of Rotterdam after Australia, he headed to the warm hard courts of Doha and Dubai.

This week, though, he soon knew he had to hit the ground running. In his first match, he faced, in Struff, a four-match losing streak. But he hit 26 winners to beat the German in around one hour, 6-1, 6-3.

It was a similar scenario in his second match, this time a 2-0 deficit against No13 seed Hubert Hurkacz, who won the Delray Beach title at the start of the year. And it was a similar Shapovalov who came out to play his 200th senior match.

He won the first set, 6-4, with a single break, winning 18-19 first serve points. The Canadian, playing all-court attacking tennis, got the early break in the second set, too, but down 1-3 and 0-40, Hurkacz dug in for a run of points to hold. It seemed to inject a little more focus into the Pole’s tennis as he fought to maintain his position on the baseline and change the rhythm of his opponent.

However, Shapovalov remained focused, went for his shots, continued to ramp up the winners at the expense of very few errors. He held for 5-3, and Hurkacz doubled faulted, then put a drop volley into the net to hand the win to Shapovalov with a break, 6-3.

Just as he had against Struff, the Canadian had accumulated 26 winners, only nine errors, and playing the kind of forward-moving tennis that the Dubai fans would have loved—had they been allowed in.

Shapovalov was quick to praise the ability of an opponent he knew well from their junior days, but he admitted that he had hit his stride well in Dubai.

“I think every day is different. Yesterday, it happened, today I felt it, but that doesn’t mean I’m going to feel it tomorrow. But for sure I put in a lot of good work with Mischa, especially after the Australian Open we had a good training block, so in that sense I do feel confident in my game and how I’m feeling physically. But it’s impossible to know when it’s all going to click together.”

So what had been the main focus of that training block?

“A lot of hitting, movement stuff focusing on my footwork so I can get behind the ball better, cleaning up some things, focusing on different patterns and plays, so definitely more a tactical training period…

“Decision of coming here this year, and also a break after Australia, has helped me get away from the bubble life and just tennis in general, so I do feel fresh mentally and physically, and feel in great shape. Feels like everything is coming together.”

Shapovalov will now play Jeremy Chardy, who has made a habit this season of winning tight three-setters, often from a set down. The Frenchman did so in his first match, beating No9 seed Alex de Minaur, and did it again to put out No8 seed Karen Khachanov, 6-7(3), 6-4, 6-4, after more than two and a half hours.

Chardy has already reached the semis in Antalya and the Murray River Open this year, so although the Canadian scored two wins over the Frenchman back in 2018, he will need to be on his guard: Chardy is enjoying this hard-court season very much.

In another thriller, teenager Jannik Sinner took almost two and a half hours and three exhausting sets to beat Roberto Bautista Agut, 6-4, 3-6, 7-5. That ensured that the only former champion in the draw was out: A new name will be engraved on the trophy come the weekend. And that name could be the extraordinary Sinner, but it could also be Shapovalov, who is chasing his first title.

The Canadian concluded his press conference with a glance back, but a positive look forward:

“On one side, I feel truly blessed and amazed that I’m able to be so high in the rankings at 21, and it’s unbelievable, but the athlete and professional side of me wants to keep going forward and break the top 10 again and go all the way up the rankings.

“It’s a good reminder for myself and team what level I can play and it’s about making that level come out more often. Hopefully one day I’ll be able to play this level consistently and that’s what we strive for.”