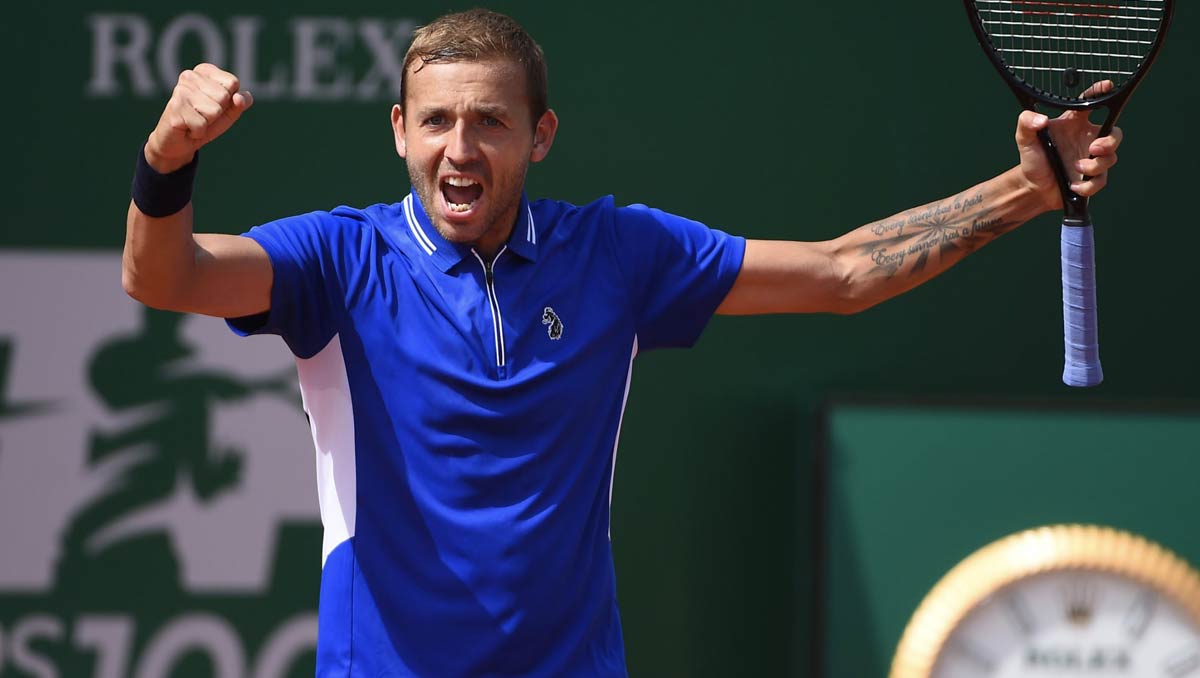 The firsts keep coming for the 30-year-old Briton Daniel Evans on the most unlikely of surfaces. He will tomorrow play his first Masters semi-final, and will then take to court to play the doubles semis, too.

Unlikely, because until this week, he had never won a match in any of the big clay tournaments: Not the French Open, the Madrid Masters, the Rome Masters, or in Monte-Carlo. Indeed, he came into the Monte-Carlo tournament on a 10-match losing streak on clay courts dating back to 2017. Not only that, he had never got beyond the second round at any Masters tournament before.

Now, he was one among four semi-finalists who could win their first ever Masters title, after Andrey Rublev put out 11-time champion Rafael Nadal in a three-set shocker.

Evans, who is assured of at least equalling his all-time ranking peak of 26, has done it the hard way, too, as an unseeded man in a top-flight draw. He beat the 2019 runner-up in his opener, Dusan Lajovic, beat the Miami champion Hubert Hurkacz next, then topped a great week by beating the best in the world, Novak Djokovic. And from a set down, he then beat No11 seed David Goffin, 5-7, 6-3, 6-4, in two hours 42 minutes.

Things get no easier: He will now face fellow single-hander and No4 seed Stefanos Tsitsipas in an attempt to reach the final. The young Greek, who beat Alejandro Davidovich Fokina after the Spaniard retired with a leg problem after dropping the first set 7-5, beat Evans in Dubai and Hamburg last year.

But the Briton, whose fitness and confidence have grown to fit his all-court skill and variety like a glove, could not hide his albeit understated pleasure in his performances this week.

Asked afterwards how his attitude had changed since the last time he played in Monte-Carlo in 2017, he said:

“My attitude, obviously pretty poor back then to developing my game on the clay… It’s been fun. Like I’d say all my matches have been totally different. I think I serve-volleyed a lot, nearly every ball, against Lajovic. I stayed quite far back against Hurkacz. The other two matches were obviously high-quality matches.

“It’s been good fun to play. But it’s definitely got a lot to do with the movement aspect. I feel a bit more comfortable moving. Obviously, I have worked with a fitness trainer for a few weeks. We did a lot of footwork stuff, sliding. It’s definitely helped.”

Evans has partnered Neal Skupski in the doubles this week, so has performed double duty each day. He said:

“But today was definitely a big day because I found yesterday extremely tiring after the doubles. I felt way more pressure to step up today to win. I mean, by no stretch of the imagination is Goffin an easy match, but winning such a big match the other day [against Djokovic], then coming back, it’s easy to put on a bad performance.”

Rublev, one of the form players of the last six months, held his nerve to complete a stunning 6-2, 4-6, 6-2 win over Nadal. The sixth-seeded Russian entered the clash trailing Nadal 0-2 in their head to head, and facing down the Spaniard’s daunting 73-5 record at this event. But he came out swinging fearlessly, making Nadal look all at sea in a swift final set under the floodlights on a cool, damp evening.

“I don’t even know what to say. I cannot imagine being in the situation of Rafa, knowing that you are the best player on clay and you have that pressure every time. I think for him it must be incredibly tough every time. I am in shock at the way he is playing under this pressure and that is why he is a legend.”

He went on to talk about the growing mental maturity that has helped him in such emotionally demanding matches:

“I mean, I would say this week I am controlling really well my emotions. At the end that’s the key. Especially with Robert [Bautista Agut], if I would let to show a bit of emotion, I would lose for sure yesterday because he was winning with a break. He had break points for second break. Second set he was winning a double break. Third set I was up with a break and he come back. If I would show a bit emotion, for sure I would lose.

Same thing today with Rafa. If after the second set I would say something or if I would show emotions, for sure the third set will be over, will be 6-2 for him. So I’m happy that I could handle it.”