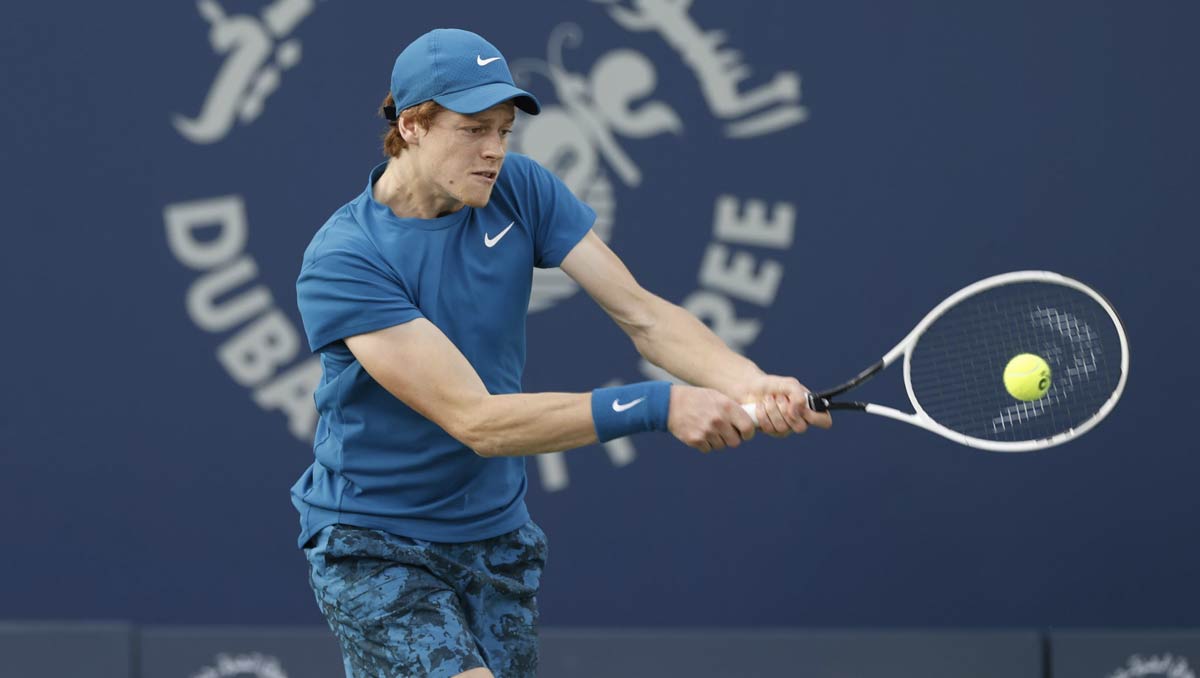 What a very different day it turned out to be in Monte-Carlo on the famous tennis club’s sun-drenched, golden-courted, blue-backdropped terraces.

Monday was washed out by rain such that only four matches were completed. That left Tuesday with a jaw-dropping 20 singles and seven doubles matches to squeeze into its snug environs, but fortunately, the only clouds in view were of the cotton-wool variety that drifted across a largely blue sky.

And where Monday had been all about the mighty Russian line-up of four top-30 men taking on an army of Italians, Tuesday saw the tables turned. For Italy, whose border with France is just along the coast road from the Monte-Carlo, boasts no fewer than nine players in the draw—but ranging from the defending champion Fabio Fognini, age 33, to teenage star Jannik Sinner, age 19,

The first match on a damp Monday saw Russian powerhouse and winner of Dubai, Aslan Karatsev, pound past teenager Lorenzo Musetti, while his fellow Russians kept their powder dry. But the turn in fortunes came early. World No2 Daniil Medvedev, who had to make a deep run in the draw to ensure he kept that ranking over 11-time champion Rafael Nadal, had to withdraw from the tournament and go into isolation following a positive Covid test.

Then Karatsev had to take on the No4 seed, Stefanos Tsitsipas. And the man who had to win six matches to claim that Dubai title, and no fewer than eight to reach the semis of the Australian Open via qualifying, could not break down the all-court speed and flair of his young opponent.

Tsitsipas advanced to the third round, 6-3, 6-4, with relatively little trouble, showing his proficiency across all surfaces at this high level. He has reached the semis at the French Open and Rome Masters and the finals of the Madrid Masters and Barcelona. He said afterwards:

“My clay court experience helps a lot to come back each year stronger, knowing that I have done better before. It was a very beautiful game out there and I enjoyed it.”

There was better news for Russia in the shape of Karen Khachanov, who beat Laslo Djere—one of five Serbs in the draw. However, the fourth Russian, and arguably the form man of the last six month, Andrey Rublev, will open his campaign Wednesday in the opening match on Court Rainier III—against another of those Italians. For the qualifier Salvatore Caruso beat the wild card from Monaco, Lucas Catarina, to reach the second round.

But what of the other Italians? How many more made it to the second round?

For a start, Sinner, in his first appearance since his final run at the Miami Masters, won in his debut Monte-Carlo match, beating Albert Ramos-Vinolas, 6-3, 6-4. The teenager, who won the Great Ocean Road Open in Melbourne before reaching his first Masters final in only his third Masters draw, went down in the first set, but went on to break serve three times—and that confirmed an exciting first meeting with world No1 Novak Djokovic.

Sinner said of the prospect:

“I think he has more experience than me, obviously… I played today one match which can give me a little bit the feeling back on clay. I’m looking forward to a great battle, trying to play my tennis, to make my tennis, then we will see what’s happening.”

The man who beat Sinner in the Miami final, Hubert Hurkacz, had a tough encounter with another Italian in the first round, in only the Pole’s second ever match in Monte-Carlo. Carried over two days, Hurkacz, who led 6-3, 0-1 when play was suspended on Monday, saved seven of the nine break points he faced to beat the Italian qualifier, Thomas Fabbiano, 6-3, 3-6, 6-3.

As for the 2019 champion, Fognini beat Miomir Kecmanovic, 6-2, 7-5, hitting 27 winners in the process, and he will next play Jordan Thompson. And fellow Italian, Lorenzo Sonego, who won the clay Cagliari title at the weekend, continued his winning ways against Marton Fucsovics, 6-3, 6-4, and will be the opening opponent for No5 seed Alexander Zverev.

However, the highest ranked Italian, No8 seed Matteo Berrettini, struggled to contain the power of the young Spaniard, 21-year-old Alejandro Davidovich Fokina. The big Italian man was playing his first match since pulling out of the fourth round of the Australian Open, and has since been recovering from an abdominal injury. He was no match for a man making his debut in Monte-Carlo: 7-5, 6-3.

Closing out the day, one final Italian, Stefano Travaglia, was forced to bow to the pressure of Marbella champion and No12 seed, Pablo Carreno Busta, 7-5, 7-6(4).

Not a bad day for Italy, however: the nation down the road still has five men in the hunt for the title. That said, four Spaniards are also left in the draw, with Nadal scheduled to begin his campaign for title No12 in Wednesday afternoon, after Djokovic and Sinner face off.