Michael Owen took to social media to praise Chelsea FC for their impressive performance after they claimed a 1-0 win over Manchester City to win their second Champions League trophy.

Kai Havertz scored the decisive goal for the Blues in the 42nd minute of the final in Porto after he was slid through by Mason Mount and duly rounded Ederson to tap home into an empty net.

Chelsea FC defended solidly throughout the game and managed to limit Manchester City to just one shot on target in Portugal as the Blues denied the Citizens their first ever Champions League trophy.

The south west London side triumphed despite Manchester City enjoying 60 per cent of the posession.

Former Liverpool FC and Manchester United star was tipping Manchester City to win the game beforehand, but he paid credit to Chelsea FC for their impressive triumph after the final whistle.

Posting on Twitter after the final whistle, Owen wrote: “Huge blow to Pep Guardiola and the @ManCity owners tonight but fair play to @ChelseaFC who deserved their win despite City having better players in almost all positions.

“That’s why we love the sport and all its unpredictability.” 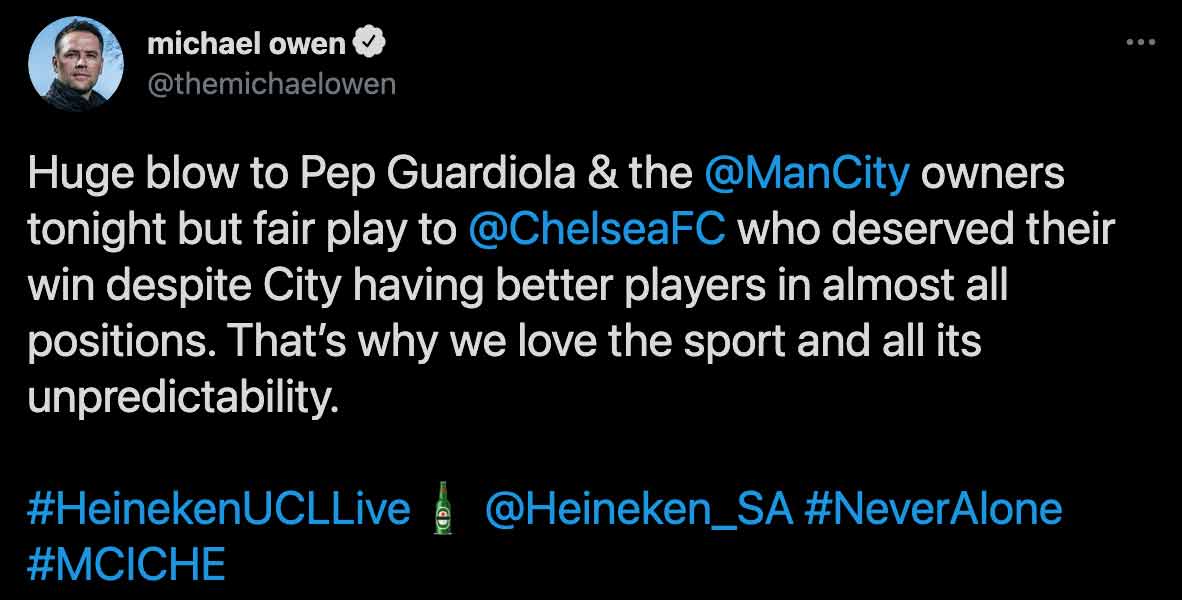 Meanwhile, former Chelsea FC midfielder Joe Cole was thrilled to see his old club win the Champions League for the first time since their triumph back in 2012.

“It’s hard for me because I’m so emotionally engaged,” Cole said on BT Sport after the final whistle. “To sit where we’re sat amongst the fans…

“Every man, from [Edouard] Mendy through to the final man in the squad, for me is a hero.

“That was an unbelievable performance. Just the emotion coming over me now… I’m just so happy.

“All these boys are heroes to me now. My son is here and they’ve given him the best day of his life.”

‘On the money’: Rio Ferdinand raves about Chelsea FC star during 1-0 final win over Man City