In-form No1 and former champ Barty back for first time since 2019 victory, as Osaka challenges for No1 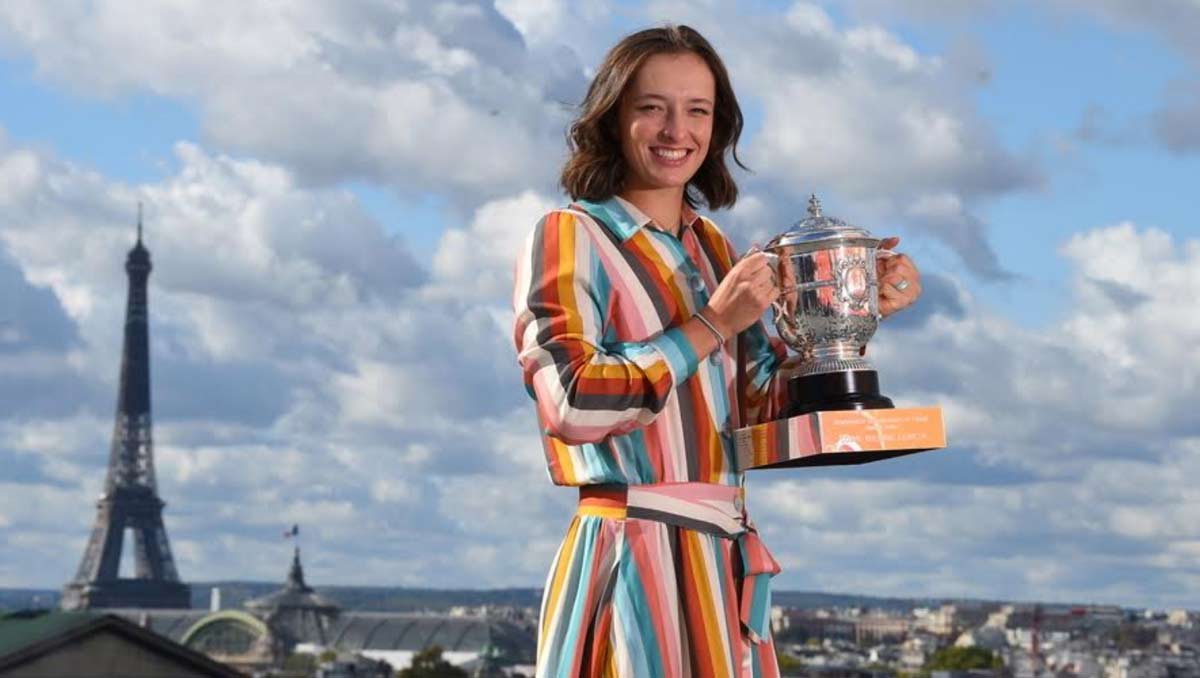 It seems only a few months ago that the tennis tour rolled into a near-empty Roland Garros stadium to play an unseasonal, and unseasonably cold, French Open championships.

And of course, it was only a few months ago, after the tennis Major that inhabits the red clay stole a march on the calendar after missing out on its May/June slot due to the ravages of a global pandemic. Last year’s tournament was played only seven months ago, and this year, as Covid-19 continues to invade almost every activity, the French tournament has again shifted itself by a week to enable at least some rounds to enjoy the benefit of partially-filled courts.

Gradually, though, tennis has worked itself back onto the road, and especially so for its long and glamorous clay swing. So the cream of tennis has been sliding and skipping across the clay grit in pursuit of form, fitness, rankings and trophies.

Among them have been former French Open champions: 2020 winner Iga Swiatek won Rome and 2019 champion Ash Barty won Stuttgart. In Madrid, one of the form players of the last six months, Aryna Sabalenka took the title, following her runner-up finish in Stuttgart, and she broke into the top four for the first time.

But the big question come this year’s French Open has been whether the free-swinging tennis of teenager Swiatek, who swept through last October’s Paris draw like a breath of fresh air to win her first title on one of its most prestigious stages, can win again. After all, things were still out of kilter last autumn, with many players opting not to travel the globe. Both No1 Barty, the defending champion, and then No3 Naomi Osaka, did not take part, although the latter had won the US Open, and went on to claim the Australian Open at the start of this year.

However, Osaka has played little since Melbourne—and won just a single clay match—while Barty has returned with a vengeance to win the Yarra Valley Classic, make the quarters at the Australian Open, win Miami and Stuttgart, and make the final in Madrid.

It is perhaps appropriate, then, that as Barty returns for the first time to defend her 2019 title there, she may also end up defending her No1 ranking. The popular Aussie will retain the top spot if she reaches the semi-final, irrespective of Osaka’s result. If not, Osaka can regain the No1 that Barty claimed in September 2019.

But Swiatek’s performance at last year’s French Open, during which she lost no more than five games to any opponent, has recently be reinforced by a demolition of No9 seed Karolina Pliskova in the Rome final, 6-0, 6-0.

But who else is in the mix?

Certainly Sabalenka is a formidable presence, and constantly improving on the consistency of her all-guns-blazing game. She came into 2021 with three straight titles, and arrives in Paris with considerable clay success. She is, though, in a packed quarter with her Madrid semi-final opponent, Anastasia Pavlyuchenkova, plus Major champions Petra Kvitova, Victoria Azarenka, Serena Williams, and Angelique Kerber. Of those four, all but Kerber are former semi-finalists.

Williams, of course, is the most prolific Roland Garros champion, and Major champion, in the draw, with three French titles from four finals. Her pursuit of the record-equalling 24 Majors of Margaret Court, however, has been her target since winning No23 while pregnant in 2017. Four Major finals and two additional semis later, she is still working for that accolade in her 40th year, and Roland Garros is perhaps her poorest surface on which to achieve it.

The bottom quarter of this same half should, in theory, bring Osaka into a collision with the injury-blighted US Open champion of 2019, Bianca Andreescu. The 20-year-old Canadian has few wins in the big clay events, but when she is fit enough to play, she has proved herself a big-stage player.

Barty’s quarter features former No1 and 2017 semi-finalist Pliskova, who has showed her clay credentials with three straight Rome finals, including the 2019 title, though her defeat by Swiatek this year was a shocker. Before that, Barty has two rising players, teenager Coco Gauff and Ons Jabeur, in her line of vision, while Pliskova’s eighth has an unseeded Venus Williams and Sloane Stephens, plus the ever-tough Elina Svitolina, three-times a French quarter-finalist.

And in the other top-half quarter, Swiatek finds several players who could shake things up: Maria Sakkari, former champion Jelena Ostapenko, and another champion, No12 seed Garbiñe Muguruza, who started 2021 in great form with the Dubai title and two more finals.

If the Spaniard can keep her injuries at bay, she could make another deep run, as could No4 seed Sofia Kenin, who last year won the Australian Open and was runner-up in Paris. However, she has won just two matches in her last six tournaments—and her first match is against Ostapenko.

· Barty and Osaka are in contention for the No1 ranking. Barty will retain the top ranking if she reaches the semi-final, regardless of Osaka’s result. If not, Osaka can attain the ranking by reaching the final herself.

· Serena Williams has won more Majors overall, 23, and more French Opens (three) than any other active player, and has played the most matches at Roland Garros, 79.

· There are 11 teenagers in the main draw, with two of them just 17 years old: Gauff and Oceane Babel. Swiatek begins her defence as a teenager, but turns 20 during the tournament.

No3 Simona Halep, No28 Alison Riske, No38 Dayana Yastremska, No54 Jil Teichmann, No56 Barbora Strýcová, No63 Sam Stosur, No94 Kirsten Flipkens

NB the other three 2020 semi-finalists are also in the draw: Podoroska, Kenin (runner-up) and Kvitova.

· Court Philippe Chatrier now has a retractable roof, and there is flood lighting on all 12 competition courts, so Roland Garros will feature night sessions for the first time. From 31 May to 9 June (quarter-finals), 10 night-session matches will be scheduled on Chatrier at 9pm, though due to the current curfew in Paris, nine of the 10 night sessions will be played without spectators. The tournament hopes to be able to welcome 5,000 spectators for its final night session on 9 June at 8pm.

· Roland-Garros stadium will initially be made up of six separate public areas (Philippe-Chatrier, Suzanne-Lenglen, Simonne-Mathieu, Courts 2 to 5, Courts 6 to 9 and Courts 10 to 14), with each allowed up to a maximum 1,000 spectators.

· Ticket-holders wishing to enter the stadium will have to provide one of the following: proof of a negative PCR or antigen test carried out within 48 hours, a vaccine certificate or a positive Covid test more than two weeks and less than 6 months old.